While Santander Bank has made headlines in recent days for financing an Indonesian forestry giant’s ongoing clearance of carbon-dense forests in Sumatra, Chinese banks among the largest funders of the company, reveals analysis conducted by BankTrack.org.

BankTrack’s research shows that Asia Pacific Resources International Limited (APRIL) and its affiliates secured $1.87 billion in financing through three syndicated loans involving at least 22 banks between December 2011 and April 2014. China Development Bank, Bank of China and CITIC were the largest financiers, followed by Santander, which has recently been the target of a Greenpeace campaign. 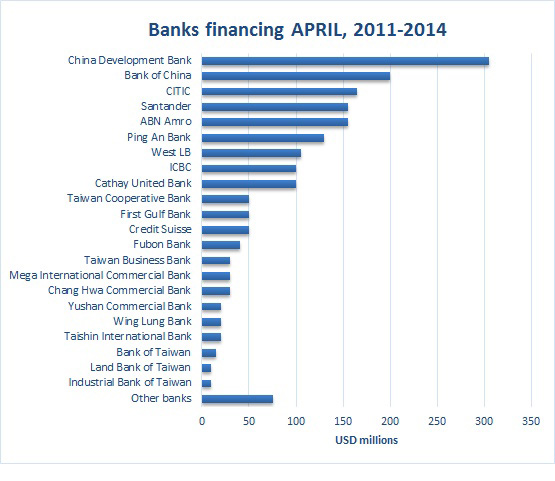 BankTrack notes that it and the Environmental Paper Network (EPN) last year reached out to nine banks financing APRIL. None of the six Chinese banks responded despite Green Credit Guidelines set by the China Banking Regulatory Commission, which call on banks to “effectively fend off environmental and social risks”.

However, the three European banks did respond, according to BankTrack.

“Credit Suisse did nothing more than point out that it has a publicly available policy on forestry issues,” the group stated in a blog post. “ABN Amro, which also has a forestry policy, was more responsive and is willing to discuss the issue but has so far not decided to divest. Both banks need to improve their due diligence process to make sure that their clients are compliant with their policies.”

“Santander, however, claims to have a forest policy but keeps it secret. In calls between the bank and NGOs including Greenpeace, BankTrack and EPN, they did not commit to any changes. The company has shown it has the furthest to go among all the European banks to improve its approach to this sector. However, all banks financing APRIL are contributing to the destruction of Indonesia’s rainforests, and we will continue campaigning them to drop the company from their loan books until it has made real and lasting changes.”

APRIL has been criticized by environmental groups for continuing to clear natural forests for timber and woodpulp production. APRIL says destruction of forests on deep peat is consistent with the sustainability policy it established last year. Green groups say that position indicates that the policy is little more than greenwashing business as usual practices.