Commentary by Niren Jain on 23 February 2015 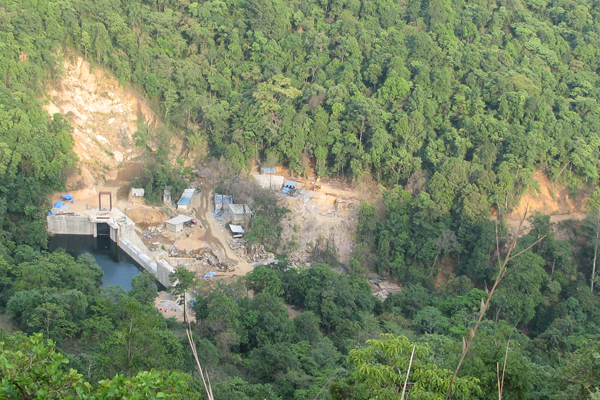 Aerial view of the Kadmane small hydroporject in the Western Ghats. Photo by: Niren Jain.

Rising energy demand and global efforts to mitigate climate change have made renewable energy projects increasingly attractive. One widely known and well-developed source of renewable energy is hydroelectricity. However, past environmental campaigns against large dams have resulted in policy changes in some parts of the world, leading to an increasing number of small hydropower projects. In India, the government provides significant subsidies for small hydroprojects (less than 25 megawatts), which are often justified as less damaging to the environment than large dams. Environmentalists fear that numerous small hydroprojects could penetrate deep into the forests of the Western Ghats, a region identified as a global biodiversity hotspot and declared a World Heritage Site by UNESCO in 2012.

In 2004, the state government of Karnataka proposed construction of over 75 small hydro dams across the Western Ghats. Of which, 27 were located in the headwaters of the Nethravathi River. If fully implemented, every tributary in the Nethravathi headwaters would have at least two small hydroprojects. Five such projects have already been built and are now operational. Yet in 2011, after protests from environmental groups including bringing the matter to court, Karnataka changed course. It instigated a new policy to ban any further small hydropower projects in the Western Ghats and put the remaining 70 projects on hold.

But, the state government could overturn this policy any time. In addition, developers are appealing the decision in hopes to still build the remaining 70 small hydro dams.

Meanwhile, threats from small hydroprojects continue to loom over other parts of the Western Ghats, where policies regarding appropriate siting of green energy projects have yet to be formulated.

“As numerous projects are cleared individually without an overall ceiling or limit, small hydroprojects fragment overall landscapes,” Ullas Karanth, Director for Science-Asia of the Wildlife Conservation Society, told mongabay.com. A well-known conservationist in India, Karanth was a member of a committee formed by the Ministry of Environment and Forests in 2009 to inspect damage from renewable energy and other projects established in the Western Ghats.

“There is no specified minimum distance among projects to limit this serious problem,” Karanth continued, “once the price of electricity goes up, many more small hydropower projects can become economically viable and the forests of the Western Ghats region may be entirely filled with such projects, with no unfragmented or untouched area remaining. This will have severe adverse effects on wildlife, aquatic species, rivers and overall hydrological regimes.”

In India, rules on forest clearance are lenient for projects requiring less than five hectares. Permission for a small project can often be quickly obtained at the state level, bypassing the more elaborate and time-consuming central environmental and forest clearance process. To take advantage of this and speed up forest clearance, project developers often split large projects into smaller components. For example, applying for permission to cut through forests for electric power transmission lines is treated as a separate project and handled through a different agency than the one permitting the dam, often after the power generation unit is established on the site. Also, in most cases, opening new forest roads is not included in the application for forest clearance, as the applicants claim there are already old logging roads in existence. Debris, resulting from tunneling and excavation, is disposed of haphazardly in the surrounding forests and heavily damages natural habitats. Further, areas required for disposing of debris are not explicitly declared in the application for forest clearance.

Funding under the UNFCCC

In spite of these environmental impacts, small hydroprojects are highly successful in obtaining carbon emission reduction credits (CER) under the Clean Development Mechanism (CDM) of the United Nations Framework Convention on Climate Change (UNFCCC). Local communities and NGOs have complained to the UNFCCC regarding the negative impacts of promoting such projects in forested areas, such as the Western Ghats.

“[The] UNFCCC has been distancing itself from its obligation of actually ascertaining whether the activity they promote is environmentally benign or not,” said Parineeta Dandekar with the South Asia Network on Dams, Rivers and People (SANDRP). “We have written to [the UNFCCCC] many times to indicate that small hydros slip environment governance in India and that the Designated National Authority not looking at impact does not mean UNFCCC should turn a blind eye towards demonstrated impacts too. On India’s part, we have written to the CDM Authority too, many times on this, but have not received as much as an acknowledgment.”

She added that “even for the Kukke small hydro project, where the project was under review after [a] very strong local effort, the UNFCCC has registered the project after all, giving flimsy reasons. Its a very difficult body to engage with.”

The Ministry of Environment’s inspection report, which was submitted in April 2010, concluded that “an exemption from environmental clearance is presently enjoyed by hydropower projects of less than 25MW capacity. This is not desirable, based on their potential impacts in the Western Ghats, and these projects should also receive full scrutiny under provisions of the Environment Protection Act as well as other conservation laws.”

Research in other biodiversity hotspots adds troubling evidence regarding the impact of small hydropower projects. A recent study published in Water Resources Research by Kelly M. Kibler and Desiree D. Tullos, from Oregon State University, compared the cumulative impacts of 31 small hydrodams (totaling 417 MW installed capacity) to those of four large hydrodams (totaling 10,400 MW installed capacity) by normalizing their effects to 1MW of power produced in the highly-biodiverse region of Nu River basin of China The Nu River basin is also of global significance, as portions of the river basin have been declared a UNESCO World Heritage Site.

Their study found that small hydroprojects were causing greater impacts than large dams for nine of the 14 investigated metrics.

The authors also expressed concern about related questions of environmental governance. Small dams are granted permission at the local level, so potential cumulative impacts are likely to be missed as few people are directly affected by a single small dam. When multiple small projects are implemented within the landscape, however, negative effects may accumulate over time. By contrast, large projects are more likely to be thoroughly investigated before they are executed depending on the country’s environmental laws and regulations.

Peter Gleick also gave this aspect early emphasis in a study in 1992, which was publishedin the journal Energy. Analyzing the ecological impacts of large and small dams, Gleick warned that “many of the environmental impacts of small facilities are comparable or even worse than conventional large hydroelectric plants, when measured on a unit-energy basis.”

His study concluded, “there is no justification to expedite licensing procedures for hydroelectric facilities smaller than some arbitrarily chosen installed capacity, as currently permitted by some laws.”

Another paper, by M. Premalatha and others from Pondicherry University, reviewed various studies on the relative impacts of small and large dams. They also concluded that the belief that small dams are more environmentally friendly than large dams “is highly misplaced and may lead to much greater cumulative harm than large hydro power projects have caused or are causing.”

All these studies and expert opinions strongly advocate that broad strategic environmental assessments are essential prior to sanctioning small hydroprojects. They also argue that such assessments need to be as rigorous, if not more so, than studies conducted for large hydroprojects. Furthermore, as long as subsidies are provided for small hydroprojects, and policies are not sensitive to project siting, renewable energy projects will continue to damage remote forests, such as those in the Western Ghats. In fact, a plethora of small hydroprojects could cause more environmental degradation than large hydroprojects, if they continue to be green washed and screened from the rigors of scientific and public scrutiny. Governments and other environmental institutions like the UNFCCC need to be sensitive to the siting of such renewable energy projects that threaten biodiversity conservation. There is clear need for a policy at both the national and international level to ensure that projects sited within biodiversity hotspots are not incentivized through environmental programs, lest they prove to be far more damaging to the environment than the services they intend to provide.

Full Disclosure: Niren Jain has campaigned against small hydroprojects in the Western Ghats for several years, including visiting sites and documenting impacts.