Forest-dwelling birds in Brazil vanish as roads infiltrate their habitat

A city-dwelling crow in Japan strategically drops a nut near a crosswalk into moving traffic. The bird then waits patiently for the light to turn before dropping down to the road and collecting the cracked nut in safety. While this type of animal behavior is fascinating, such adaptation to the human world is not possible for most bird species.

Unlike this urbanized crow, birds in the Amazon aren’t well suited to use human-developed surroundings to their advantage. Their dependence on intact forests makes them particularly vulnerable to environmental impacts.

In a study in the Proceedings of the Royal Society B, scientists set out to determine some of the specific effects road networks have on biodiversity loss by comparing the richness of forest birds with road development in Pará, a state in the eastern Brazilian Amazon.

Scientists employed a relatively new metric called ‘roadless volume’ (RV) to determine the ecological value for the region. RV measures the amount of space between roads. The value of an area is based on distance from the nearest road, meaning that areas with a lower density of roads are assigned a higher RV value. During the study, changes in RV were measured with satellite images.

Scientists estimate that catchments along the border of deforestation activity lost an average of 83 species of forest-associated birds between 2000 and 2008 as road building increased.

The researchers concluded that road networks directly impact biodiversity by way of road-kill events and disturbance or pollution, but also by more subtle, indirect consequences such as influencing loss of habitat and forming barriers that restrict bird movement and, subsequently, genetic variation among species. 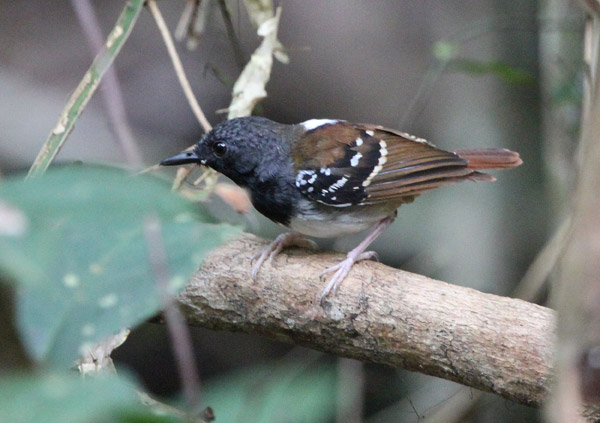 Chestnut-tailed Antbird (Myrmeciza hemimelaena), a bird species that scientists find to be sensitive to environmental impacts on its habitat. Photo by Alexander Lees.

For Sadia Ahmed, co-author of the study and Postdoctoral Researcher in the Computational Science Laboratory at Microsoft Research, the most interesting finding from the study was that roads impact biodiversity independently of deforestation, via more cryptic forms of disturbance.

These disturbances include reduction in habitat quality, increased risk of forest fires, and, perhaps most importantly, the facilitation of human access to undisturbed lands, increasing the potential for illegal logging, poaching, and colonization. Scientists have long observed that deforestation springs from new roads in what is described as a “fish bone pattern,” with colonizers and loggers fanning out into the forest as new roads bring access.

“There is protection in place for much of the Amazon but the problem with roads is once they are in place, forest access has, in effect, been granted to ‘anyone’, as anyone can use the roads,” Ahmed noted.

Today, the Amazon contains the largest stretch of our planet’s remaining tropical forests and is one of the most species rich areas in the world. As human activity causes this area to become increasingly endangered, scientists speak to the significance of studies such as this.

“Quantifying the link between roads and bird diversity is especially important in tropical deforestation frontiers,” the researchers write. “Here, we focus on Amazonia, the world’s largest remaining expanse of tropical forests, host to the world’s most speciose and increasingly endangered avifauna.”

Ahmed believes the knowledge derived from this study could be helpful in mitigating human impacts on biodiversity in the future by potentially serving as a warning sign.

“We found that road construction acted as an early warning for future habitat degradation… looking at areas with increased road networks, but as of yet little change in forest cover, could help us identify frontier regions that are likely to experience biodiversity loss in the future,” she said.

On an even brighter note, warnings tipped off by new road construction could benefit future conservation efforts through use of the RV measuring system.

“The benefit of the RV metric is that you could add planned roads to a road map and calculate the change in RV and thus the potential change in species richness,” Ahmed explained. “This could, at the planning stage of construction, help identify less damaging road routes or identify regions along the road network where conservation and monitoring efforts should be focused.”

Between 2004 and 2007, road networks in the Brazilian Amazon grew by nearly 17,000 kilometers (~10 miles) each year. It is estimated that over 27,000 kilometers (~16 miles) of roads in Pará will be constructed, improved, expanded, and extended by 2031 due to a predicted rise in economic growth and transport logistics.

“Given anticipated Amazonian road network expansion, it is of the utmost importance that links between roads and biodiversity be quantified to facilitate accurate assessment of potential impacts,” the researchers write. 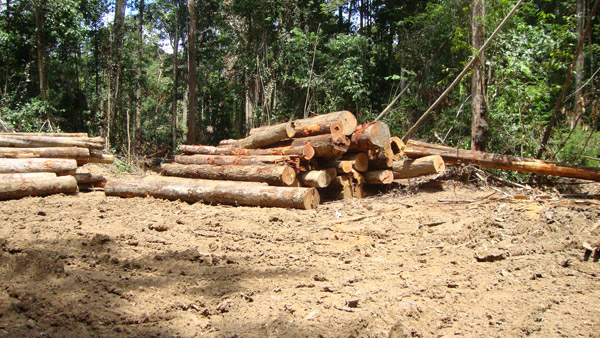 Muddy road through the Brazilian Amazon. Photo by Rhett Butler.