During Indonesia’s 2014 national census, 848 people were recorded living in the village of Setulang, an hour’s drive from Malinau, North Kalimantan (formerly part of East Kalimantan) at the confluence of the Malinau and Setulang rivers. All of them consider themselves members of the Umo’ Longh (Uma’ Long) tribe of the Kenyah Dayak people that once resided deep in the heart of Borneo.

“We began moving here from Long Sa’an in 1978,” explains Kole Adjang, the head of Setulang Community Forest Management Group. “And even now, our old village at the headwaters of the Long Pujungan, Bulungan remains empty.”

Although Long Sa’an was a nice enough area, its remoteness and the subsequent difficulty of accessing goods they could not produce themselves made it a challenging place to live in the modern world.

“To get staples like salt or kerosene, we needed to paddle our boat to Bulungan, a trip that would take days, or even weeks if the river was low or flooding,” Kole said.

Here, as in their former home, the forest is the source of the community’s spiritual wealth. The relatively pristine lowland dipterocarp rainforest is characterized by massive trees with sprawling canopies, and contains a broad diversity of animal and plant species—including several high-value timber species. The economic potential to be gained by harvesting the forest has brought a continual onslaught of investor wishing to tap into the resources. However, resolutely, the residents continue to turn them away. 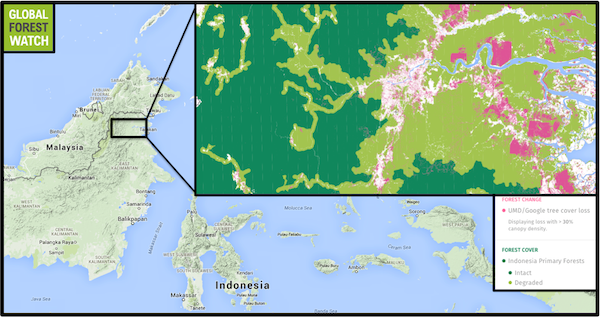 Setulang lies within primary forest, much of which is already underlain by logging, palm oil, and wood fiber concessions. According to Global Forest Watch, the area shown lost approximately 120,000 hectares — more than 6 percent — of its tree cover from 2001 through 2012. However, this loss does not represent outright deforestation, with harvesting of established tree plantations also lumped into the data. Click to enlarge.

Perseverance, respect for their ancestors, and a knowledge that the clearing of the forest will result in environmental disaster for them have all helped the community remain solidified in their resistance. Instead of selling out, they created a Tana’ Ulen, or “protected land”.

The name Tana’ Ulen historically referred to the forest held by the local ruling aristocracy for hunting, fishing, and for the collection of non timber forest products. However, today Tana’ Ulen refers to customary forests jointly managed by the community for the benefit of the community. The areas are managed with sustainable practices, often with well-established schedules of what may be harvested when, and in what quantities. The timber resources are used solely for the construction of community buildings such as town halls, or churches. People are forbidden to cut trees, burn, or otherwise clear the forest for agriculture, but may collect food, medicines, and materials for handicrafts.

According to Kole, the first community forest management group was established by the village on July 7, 2003. This organized body served to show the Environmental Ministry the villagers were serious about protecting their land, but official recognition would not come for several years.

Finally, in 2013, the community effort gained government approval with the passing of Ministry of Forestry Decision #526. This ruling set aside 4,330 hectares of government production forest as Tane’ Ulen Setulang, officially giving the local people the right to manage the forest, as well as a legal standing to resist development.

Editor’s note: there are two ways of spelling the community’s name: Umo’ Longh and Uma’ Long. Also Lini Wollenberg of the University of Vermont and CGIAR noted that “in the past aristocrats have used not only for hunting and fishing, but also for protecting rattan”, so that detail was also added on 2/2/15.