by Leslie Willoughby on 1 December 2014

Fierce predatory sharks rule the oceans from the apex of the food pyramid. But climate change may be tougher than these marine hunters, a new study suggests. As oceans warm and their waters become more acidic, fewer sharks may survive their infancies.

No one knew how juvenile sharks might respond to climate change until scientists released the study, published in September in the Proceedings of the Royal Society B. The study found that the condition and survival of young tropical bamboo sharks fell sharply if they developed and hatched in warmer, more acidic water.

Acidic water affects how some ocean animals take up calcium to build their bones and shells. But without bones, sharks should have no such problems, some scientists said, since sharks’ muscles attach to a lightweight framework of cartilage unlike the boney skeletons of other fish But, marine biologist Rui Rosa of the University of Lisbon in Portugal decided he could not take that for granted.

A juvenile tropical bamboo shark like the one pictured here can grow to be 1 meter (40 inches) long. Photo by: Rui Rosa, University of Lisbon.

“I am curious, I am a scientist, I cannot accept this kind of dogma, ” he said in an interview with mongabay.com.

Rosa led a team to find out how a shark species might fare in warmer and more acidic (lower pH) seas. They studied the brownbanded bamboo shark (Chiloscyllium punctatum), a bottom-dwelling fish of the Indo-West Pacific, and tested the shark during its early stages of development, when it is most vulnerable. Rosa said that choice distinguished his team’s research from other recent studies. It could explain why the results were dramatic.

In each of 12 laboratory aquariums, they incubated five recently laid shark egg cases, commonly called mermaid’s purses. They observed the embryos’ survival at their native temperature and pH, and with combinations of a 4° C (7° F) increase in temperature and/or a 0.5 lowering of pH. Those figures are near the high-end of estimates of several published projections for changes in the ocean by the end of the century, said fish ecologist Scott Hamilton of Moss Landing Marine Laboratories in Moss Landing, California, in an email to mongabay.com.

Initially, most of the shark embryos survived. But after they hatched, the young sharks’ condition deteriorated. In the group exposed to both warming and lowered pH, more than half the young sharks died within 30 days after hatching.

“Of course I was very sad at the end of the experiment,” said Rosa. “I was not expecting this. I was expecting some physiological impairments and disturbances, but not such an evident result regarding their survival.”

The sharks may adapt over several generations, Rosa said. However, the long lifespans of many species and their relatively low rates of reproduction might limit how quickly they can change.

Tropical bamboo sharks have evolved where temperatures and pH shift often, Rosa noted. In the wild, they occupy the area between the rocky ocean bottom and sea grass beds, and farther out to where coral reefs grow. They may have developed enough resilience to withstand some change. But seagoing sharks evolved in more constant temperatures and may have a harder time adjusting to ocean warming, Rosa projected.

The new research is notable because it tested two aspects of global climate change at the same time, according to marine biologist James Barry of the Monterey Bay Aquarium Research Institute in Moss Landing, California, who was not involved in the project. Along with warming and lower pH, oxygen levels are also declining in some parts of the ocean, he told mongabay.com. 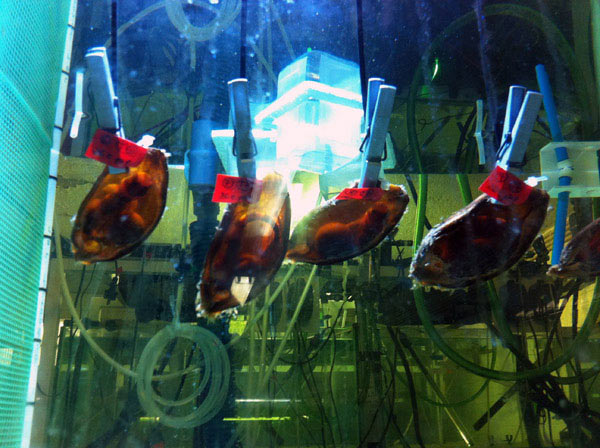 Not all research equipment is high-tech. A team member suggested using clothespins to attach shark egg cases to the cords that suspended them inside the aquariums. Photo by: Rui Rosa, University of Lisbon.

“Will the surviving sharks grow up and act as predators?” Barry asked. “If not, their prey may benefit—or the prey may also be affected by climate change.” He recommended further study of a cross-section of shark types.

Rosa hopes his work will demonstrate the far-reaching impact of climate change. “I would like to leave this planet as I found it, a very nice place with huge marine diversity,” he said. “If we don’t do that, it’s unforgivable.”

Leslie Willoughby is a graduate student in the Science Communication Program at the University of California, Santa Cruz.