Trees of the family Dipterocarpaceae dominate the forests of Southeast Asia. These long-lived hardwood trees grow to impressive heights of more than 50 meters (164 feet), and have small seeds with conspicuous wings that aid in dispersal by wind. Of the estimated 680 species, most are evergreen; just six are deciduous. The deciduous species are found in tropical dry forests, which occur in relatively dry areas.

The heterogeneity in climate types and rainfall levels in Southeast Asia results in a mosaic landscape, with different forest types interspersed with one another. This extreme habitat heterogeneity makes it difficult to map the different compositions of these forests, resulting in a lack of study of many forest types and their underrepresentation in protected area networks. To address this issue, Christian Wohlfart from the University of Bayreuth and colleagues came up with a remote sensing-based method to accurately delineate forest types, which they demonstrated by focussing on one particular forest type: Dry Deciduous Dipterocarp forests. Their study was released this week in mongabay.com’s open-access journal, Tropical Conservation Science. 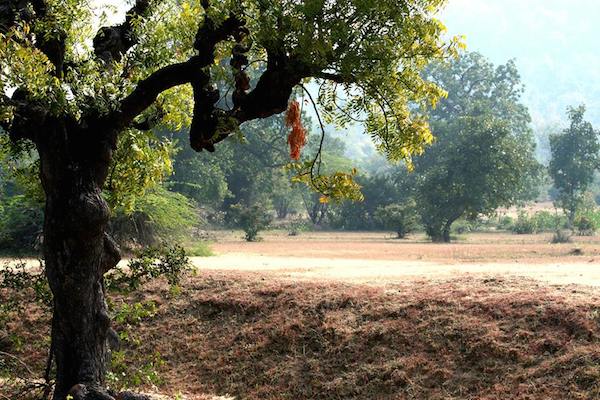 Dry Deciduous Dipterocarp forests (DDFs) are a type of tropical dry forest, restricted to areas with a total annual rainfall of 100 to 150 centimeters (40 to 60 inches) and a pronounced dry season. Of the six deciduous dipterocarps, four are dominant in dry forests: Shorea siamensis, S. obtusa, Dipterocarpus obtusifolius, and D. tuberculatus. DDFs usually have a relatively open canopy, with an understory full of grasses and cycads. But as human disturbance increases, the forests become more open in structure and lower in stature, transitioning into savanna woodland with less woody cover. 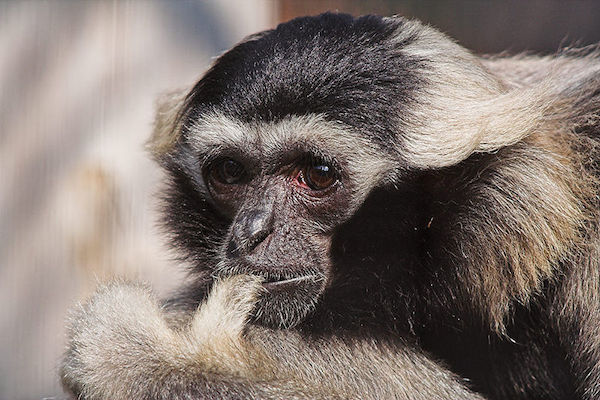 During the dry season, the trees shed their leaves to conserve water. The open forest structure and the seasonal changes throughout the year makes it difficult to tease apart DDF from other forest types or open areas using remote sensing techiques. The heterogenous, mosaic landscape where DDF is patchily distributed can be analyzed via satellite images, but they must be of high resolution and free from complications like cloud cover that reduce visibility.

These factors mean that continental-scale maps for DDF in Southeast Asia are scarce and inaccurate. But high quality information is necessary for effective conservation planning. For their study, Wohlfart and his colleagues focused on a part of the Indo-Malayan region, which is part of the Indo-Burma biodiversity hotspot and encompasses Myanmar, Thailand, Laos, Cambodia, and Vietnam. In these countries, the researchers expected DDFs to exist in northern Myanmar, western Thailand and eastern Cambodia.

Global Forest Watch data paints a rather dismal picture of forest cover in these countries. As of 2000, only 39 percent of Thailand was covered in lush forest, of which 35 percent is primary forest. Vietnam has about 50 percent forest cover, of which just 1 percent is primary. Though Myanmar had 65 percent tree cover in 2000, only 10 percent was primary. Forest loss in Myanmar has occurred all over the country, with one pocket of particularly high deforestation along the Ayeyarwady River north of Mandalay. 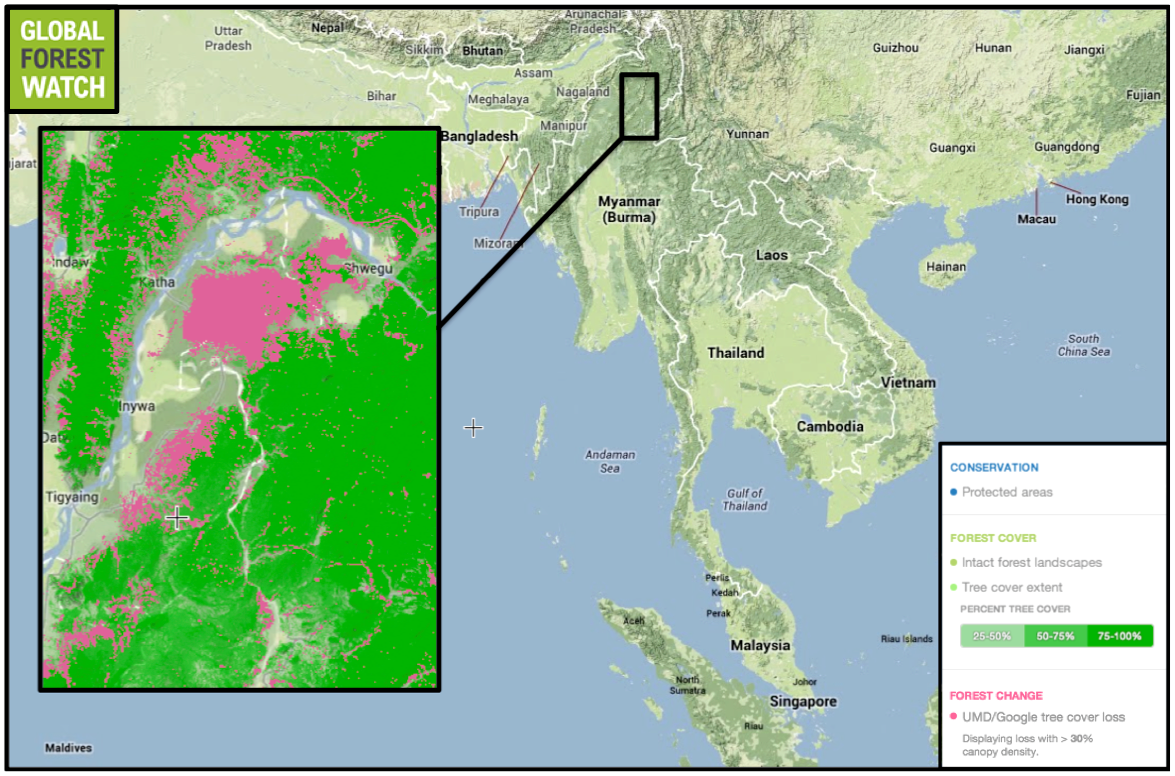 Forest along the Ayeyarwady River has been particularly hard hit by logging. The area shown is devoid of large tracts of intact forest, and also lacks protected areas. Map courtesy of Global Forest Watch. Click to enlarge.

With 50 percent forest cover, 3 percent of which was primary as of 2000, Cambodia lost more than 6 percent of its tree cover between 2001 and 2012. The provinces of Pailin, Battambang, Kampong Thom and Siem Reap were particularly hard hit. Cambodia is considered a “high deforestation country” by UN REDD; in all, it lost almost 3 million hectares of forest between 1990 and 2010.

Using remote sensing imagery from Moderate-resolution Imaging Spectroradiometer (MODIS), which is orbiting the earth on the Terra satellite, the researchers mapped different forest types in these countries.

“We integrated the strong seasonality by calculating different seasonal metrics based on high temporal MODIS data, such as amplitude, length of season, start of season, etc., in order to separate dry forests from other forest entities, such as evergreen forests, which [have] different seasonal signals,” Wohlfart told mongabay.com.

After explicitly incorporating information about seasonality, the researchers came up with a percentage of forest per unit area. “Having information in percentage per pixel [is useful] as dry forests can occur in very small fragments across the landscape,” Wohlfart said. “Conventional land cover maps only use discrete values per pixel, hence losing information.” The other problem often encountered while carrying out remote sensing analyses in Southeast Asia is cloud cover. In respose, this study used data at a high temporal resolution and discarded “bad data” affected by cloud cover.

The study arrived at a model that uses satellite imagery to predict forest cover of the entire region. Usually the next step after developing a model is validation of the model by “ground truthing” —checking the sites in-person to see whether model predictions actually capture what is on the ground. However, Wohlfart and his team were unable to do this.

“We could not conduct field work because of time and money constraints. We worked on a large spatial scale,” said Wohlfart. “However, high resolution imagery from Google Earth offers us a detailed synoptic view about the prevailing land cover (for free!!!), which is…more and more used by the scientific community.”

According to Wohlfart, this method can be adapted to other regions around the globe.

“MODIS data are freely available on a global scale and can be easily accessed,” he said. “But for training and testing we need data, which can be either generated by Google Earth or even better by field work.”