Persistence is the key factor in the two most common human stressors on tropical wildlife. In Malaysian Borneo, hunting continually diminishes wildlife populations, whereas the negative impacts from selective logging are more transient, according to a recent study in Conservation Biology.

The study, led by Jedediah Brodie of the University of British Columbia, deployed a series of camera traps across a gradient of disturbed areas to investigate direct and indirect impacts on wildlife. Although both hunting and new logging reduced the number of species in a given area, there was evidence that some wildlife may eventually return to selectively logged areas. 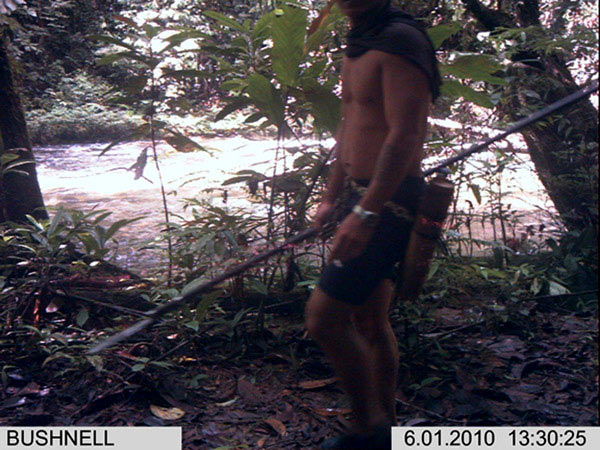 Camera trap image of a hunter in Sarawak. In Gunung Mulu National Park in Malaysia, hunters were detected on 8.3 percent of the days when cameras were deployed. Photo courtesy of Jedediah Brodie.

“Logging companies are taking out the high-value timber and leaving everything else,” Brodie explained. “But in so doing, they knock over smaller trees, make skid trails, compact the soil, and cause lots of erosion—so it’s not a benign process by any means.”

The study’s findings emphasize the immediate impact of such logging: selective logging reduced occurrence for all 30 species detected in the study area and caused an 11.3 percent decrease in the number of mammal species present.

However, after the ecosystem has a chance to regenerate, evidence suggests there is some hope for wildlife.

“Our study shows that the recovery of mammal diversity after logging is faster than we thought, although it’s variable by species and some carnivores remain averse to logged areas for a long time,” said Brodie.

Species richness was similar to that of undisturbed forest tracts in areas that were logged more than 10 years earlier. While there is no discrete timeframe for ecosystem recovery, the authors selected a decade as a proxy for partial canopy regeneration.

While the impacts of logging are relatively transient, hunting pressure is continual, even as an ecosystem approaches complete defaunation. Overall, hunting adversely impacted 87 percent of the species in the study. Improved hunting efficiency and cultural shifts are key components of the potent impact of hunting.

“In the past, nomadic people might have moved out of an area once the game animals became depleted. But now people are more sedentary and settlements are based around opportunities for farming or logging, or access to schools, clinics, and roads,” explained Brodie. “So people have become ‘central place foragers,’ and will continue to hunt in the forest around them even after the animals have been depleted.”

So how do these two threats compare across the Bornean landscape?

Recent selective logging had the strongest negative influence on all species, but after about a decade, these impacts were somewhat attenuated, according to the study. Hunting had a more negative effect in terms of wildlife abundance and richness than older logging.

It is interesting to note that the impacts of hunting and logging were not correlated across species. This,, according to the authors, suggests that, “conservation strategies addressing one threat cannot be expected to implicitly mitigate the other.”

According to Brodie, the most significant difference is persistence: “one of the novel things we found in this study was that, whereas the logging impacts are somewhat ephemeral, hunting impacts are surprisingly persistent over time. So hunting continues even in areas that have been really hunted out, probably for recreational or cultural reasons rather than food provisioning per se.”

As tropical rainforest conservation strategies are optimally adapted to maximize effectiveness, this research suggests that the current focus on indirect threats should be expanded to include hunting. In particular, an emphasis on sustainable hunting is needed to adequately protect wildlife populations and biodiversity.

Ben Sullender is a M.S. student in the Nelson Institute for Environmental Studies at the University of Wisconsin-Madison.

(11/12/2014) A new paper confirms what ecologists have long feared: hunting birds and mammals drastically raises the risk of extinction for tropical trees. Following the long-lifespan of a single canopy tree, Miliusa horsfieldii, researchers discovered that overhunting of animals could increase the chances of extinction for the species fourteen times over a century, from 0.5 percent to seven percent.

(11/05/2014) In 1904, Carl Anton Larsen, a Norwegian Antarctic explorer, arrived at Grytviken on the British island of South Georgia with three ships and 60 men, to establish its first commercial whaling station. The number of whaling stations soon increased, and by 1965 these had caught and processed an estimated 175,250 whales.