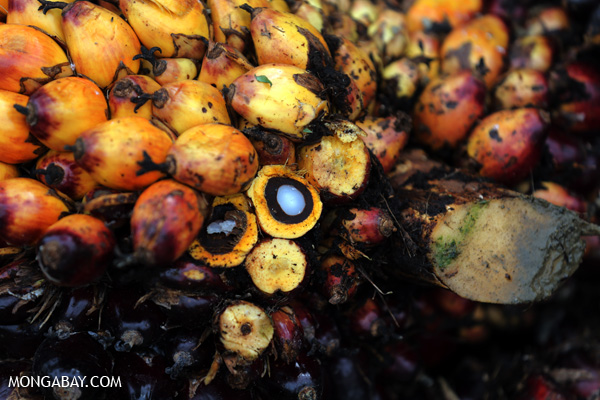 Home products giant IKEA has made a time-bound commitment for eliminating palm oil linked to deforestation and human rights abuses from its supply chain.

IKEA, which uses palm oil in candles and food products, unveiled the policy today. It calls for zero deforestation and no conversion of peatlands, in addition to existing certification standards under the Roundtable on Sustainable Palm Oil (RSPO).

“All new palm oil developments should be on land where biodiversity and natural vegetation are already highly degraded,” says the policy, which sets a December 2017 target for full implementation.

IKEA also said it aims to source 100 percent of its palm oil from segregated sources.

“This means that all palm oil in IKEA products must be sourced from producers who can verify the mills and plantations from which they are purchasing certified segregated palm oil and that they are meeting IKEA requirements,” said IKEA.

Any supplier that fails to comply may see its relationship with IKEA “phased out”.

“IKEA operates robust processes and systems to ensure that IKEA products are produced in line with our standards and requirements,” states the policy. “If any issues are discovered, we first establish the facts, and then strive to improve and remedy the situation. Once it is clear that remedy or improvement is not possible, we will phase out the relationship.”

Greenpeace, which is campaigning to eliminate deforestation from palm oil production, welcomed the move.

“IKEA’s decision to clean up its supply chain for products containing palm oil is good news,” said Joao Talocchi, Greenpeace USA Palm Oil Campaigner. “Commitments over the past year from companies like Procter & Gamble, Colgate-Palmolive and General Mills have brought the palm oil industry to a tipping point. We’re now at the stage where it’s unacceptable for companies not to address rainforest destruction with their suppliers.”

Greenpeace added that IKEA should use its influence to push the RSPO to adopt stricter standards to define what forests are protected under the certification initiative. Currently the RSPO only bars conversion of forests deemed by auditors as having “high conservation value”, rather than their carbon stock, allowing secondary forests to cleared for plantations.

Palm oil hasn’t been the only issue environmentalists have had with IKEA’s supply chain. In February, a Forest Stewardship Council (FSC) certificate belonging to an IKEA subsidiary was suspended after auditors found incidents of non-compliance with the timber standard. The certificate was restored in March.