Commentary by Scott Poynton on 25 November 2014

Scott Poynton is the head of The Forest Trust, an international non-profit that works on addressing environmental challenges. The views expressed in this commentary are his own.

From what I’m told, there can’t be too many worm farms in the West Bank. Local agricultural experts say they’ve never heard of the practice. That doesn’t mean that someone, somewhere isn’t happily vermicomposting — the technical name for worm farming — but it’s clearly not happening at any scale. After today though, there are at least two worm farms up and running here.

I’m visiting Beit Ommar, a township near Hebron in the West Bank. I was here for the first time in June 2013 with my TFT colleague Julien Troussier at the invitation of the Palestinian Ambassador to France. Ambassador Al Fahoum had learnt of TFT’s work through his network and invited us to visit Palestine to see if there were any projects we might conceive. What we saw on that first short trip gave us the idea of setting up community worm farms.

The land here has been farmed for thousands of years and we saw soils very low in organic matter. It’s already a tough climate and the farmers we met told us that temperatures are rising while rainfall is falling and becoming less frequent; yes, climate change is affecting things here too. Rain now falls in fewer, more intense events. Soils already low in organic matter can’t hold the water so it washes away, taking valuable nutrients with it, leaving the land dry and less fertile in the heat until the next rainfall. Crops are struggling under these hot, dry and increasingly nutrient poor conditions. Yields are falling and pest and disease problems are increasing. The agricultural sector here is struggling. 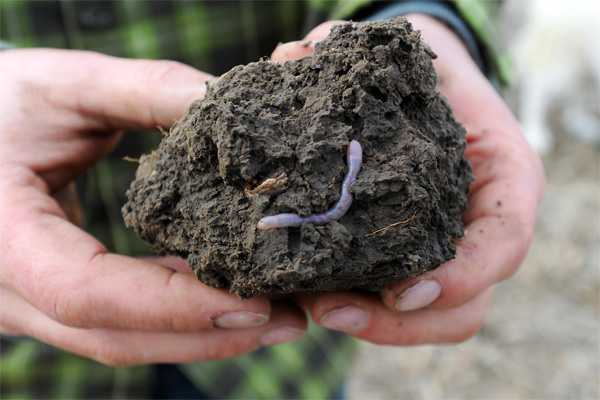 In response, farmers have followed the same path as their peers the world over and resorted to chemical inputs, where they can get them, to boost yields and fight pests and diseases. Yet this short-term fix further exacerbates the problems as the chemicals kill important soil micro-flora and fauna, like worms, that help maintain soil organic matter. On two visits here, despite much digging, I’m yet to find a single earthworm in any field.

There’s another problem raising its grim face here. Cancer is on the rise and in Beit Ommar, it is the number one cause of death. While no one has established a causal link, people worry about the amount of chemicals used to grow food.

Farmers are looking to build cisterns to capture the rainfall before it washes away yet these are very expensive in a context where money is in short supply and building a cistern is subject to control and approval that is not always granted. Some cisterns are being established but usually with support from external donors, creating an unhealthy dependency on external aid. There is a growing sense of despair at the state of things. People are abandoning their land in search of work elsewhere which opens the possibility that it will be taken over and used for other purposes; the society has become dependent on food imports. Overall, my sense is that they’re losing resilience.

The question I asked myself is “what can the farmers do themselves to improve the situation?” It should be something that they control and that doesn’t require external support or approval. First and foremost, they need to get organic matter back into the soil to capture that rainfall before it washes away. The best cistern you can have is the soil itself. Capturing water right there, on the land, where it is needed can happen if you have high organic matter content. The farmers do use animal manure for fertilizer, which is good organic matter, but it’s not enough. It helps increase yields but it’s not building up the soil organic matter content in any meaningful way. What I saw in the street gave me the idea for worm farms.

Food waste is thrown away here. We travelled a long way south of Hebron to a big hole in the ground where food and all other waste is carried for disposal at great expense in a context where government money is in short supply. Thick, acrid smoke filled the air from fires lit amongst the waste and as we coughed and spluttered, I wondered at what might better be done with such a great and readily available source of organic matter. Couldn’t we close the food cycle and put it back on the land?

“Do you guys do any composting?” I asked our hosts. “Not really” came the response “but we’ve heard about it, we’re interested.” I don’t see a lot of compositing happening anywhere in the world and report after report highlights the blight of food waste in countries like the UK where it’s estimated that around one third of all food produced is wasted. Crazy really.

So I explained the idea and concept of worm farming, taking food and kitchen waste and passing it through worms to produce high quality organic matter and liquid fertilizer. It’s being done in an increasing number of households around the world, developed and developing, and while such an activity would start small, it has the capacity to grow to scale quickly once people catch on to its benefits. Vermicompost, the name given to worm castings (worm poo in common parlance), is very rich in nutrients and is such high quality organic matter that it essentially acts as a great sponge for water. Placed around the roots of food crops, it’s hugely valuable. It’s something that each and every person who cooks and eats, yes, that’s all of us, has the capacity to produce. In the short-term, vermicompost from home worm farms would be insufficient to lift the organic matter across large areas of agricultural fields, but many families here depend in part for their food on small home gardens or small patches of land. Getting started is the hardest part of any venture and people thinking about the bigger problems can be blinded to the efficacy and worth of such small-scale solutions. Yet once people start seeing increased yields in their small home gardens, we might create an impetus to take the idea to scale and to really start addressing the issues on larger agricultural fields. Imagine how much food waste is generated in Hebron’s restaurants! And beyond Hebron? We might yet catalyze young entrepreneurs to undertake worm farming and composting at a commercial scale. Why not?

The aim really is to increase people’s resilience in the face of growing challenges by increasing agricultural productivity. If we can get organic matter back into the soil, we can hold more water. We’ll reduce erosion. We’ll increase yields without the need for chemicals. We’ll increase the nutrients available to plants and through that, the nutrients in the food produced, bringing health benefits to families. We’ll encourage local worms, the best farm workers, to come back and keep the cycle going. With this little bit of innovation, we could have huge impacts.

So here we are. This week we’ve established two worm farms using plastic containers made in Hebron and worms purchased in Israel where worm farming exists but similarly, not at any scale and where food waste is also mostly thrown away.

We established one at a local Agricultural School where the teacher embraced the idea immediately and with great enthusiasm along with some of his students who cut up the vegetables to help get us started. I hope that the School can become a local “worm bank” as well as a research laboratory on the production, use and benefits of vermicompost.

We established a second one with a Women’s Group in a nearby village and while the woman blanched a little at the site of the earthworms, she was very keen to try the idea and promised to keep us posted on progress. Both places will be getting follow up visits and support.

These two worm farms represent small experiments to see what’s possible; they’re a tiny first step. It gets cold here in winter and hot in summer. The worm farms will require careful management if we’re to keep the worms alive. But there really is great interest in the project and over the coming months, I will visit again to see if we can get more worm farms up and running and, if results from our two first trials are good, we’ll start the process of sharing the idea and approach more broadly. And yes, we’re going to get going in Israel too.

It’s an exciting and interesting project. Imagine if these communities really become active food waste recyclers and all vegetable farm and food waste gets composted, either through worms or more traditional methods. The bottom line for me is that while the scale of such an endeavor remains dependent on people embracing it and therefore there’s a risk that it might not take off, nonetheless, throwing hugely valuable and scarce organic matter in a faraway hole at great expense seems something silly and with the problems unfolding in the agricultural sector, composting “free” food waste does seem worth trying. Apart from using food waste more productively and less expensively, it has the added benefit of helping kids understand the food cycle and to reconnect with the land but that’s something for later.

Wouldn’t it be great if the difficulties faced by farmers in Palestine might paradoxically provide the opportunity to develop a different model for others to follow? My fingers are crossed for our pioneer worm farmers and their brave worms. If it takes off, it really could be something special, growing resiliency in a tough and uncompromising context.

P.S. If you are a happy worm composter composting in blissful solitude somewhere in the West Bank, do let us know. We’d love to connect with you to learn from your experience! Contact me at [email protected]