This article is the second in a two-part series that examines deforestation trends and drivers in Assam, India. Read the first part here.

Northeastern India boasts nearly 44 percent of the country’s dense forests, and contains one of the most biodiverse areas in the world. However, the region lost approximately 548,440 hectares of tree cover—more than 3 percent—from 2001 through 2012. Sonitpur, Assam, has been particularly hard hit as people flooded into the area and cleared forest.

An indigenous group called the Bodos began agitating for a separate state, “Bodoland,”in the 1990s, encouraging an influx into Sonitpur and the surrounding region to ensure a majority. With insurgency also came law and order problems. Poaching and extortion became rampant. The government set up army camps in the area; necessitating more deforestation to make room for military bases and cantonments. The area’s proximity to China made it all the more strategically important.

Mazoomdar points out that in spite of the deforestation, there was no increase in agricultural produce from Sonitpur. This meant forested land was not converted into agriculture, like what is done in other parts of India. “It was just cut up and sold off,” he writes.

The areas near Nameri and Pakke Tiger Reserves in Assam, just bordering Arunachal Pradesh, have been facing the same fate. Three reserve forests near Nameri have almost entirely disappeared.

“Since 1989, about 118 square kilometers of forests have been lost from a 10-kilometer radius along the southern edge of the two tiger reserves. Forest loss continues to this day and it appears to have moved closer to the edges of Nameri and Pakke Tiger Reserves,” writes Nandini Velho in her recent paper in the journal Biodiversity Conservation. Forest Department staff have reported cut logs floating down the Kameng river, which borders both tiger reserves.

According to Global Forest Watch, Pakke and Nameri Reserves lost nearly 1,000 hectares of tree cover within their borders from 2001 through 2012. Click to enlarge.

The study used a combination of remote sensing analyses, articles in print media and interviews with local people to understand the impact of insurgency and armed conflict on forest loss and livelihoods. Nearly all (99 percent) of the interviewees were of the opinion that the forest loss was due to the insurgency; many also said that the deforestation started in 1990 (around the time when the Bodo agitation began). Popular print media also supports this trend.

The paper has also earmarked another important fallout of the strife: poaching and habitat loss leading to an alarming loss of wildlife, and which is extending into neighboring Arunachal Pradesh. Important tiger prey species, like sambar and gaur, are being poached, along with tusked elephants, which sometimes move out of protected areas. “Hunters can procure guns from insurgents with as little as $9,” writes Velho. Controlling poaching in these areas is next to impossible. 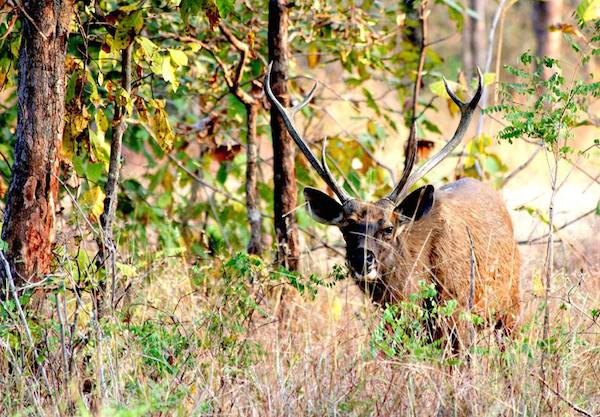 Sambar deer (Rusa unicolor) are native to Southeast Asia, India, and southern China. They are listed by the IUCN as Vulnerable. Photo by Morgan Erickson-Davis.

With their forest habitats felled, animals often have nowhere to go except areas populated by people. The fertile plains abutting the Brahmaputra River are excellent for agriculture, and the area is famous for cultivating rice. But paddy fields are also magnets for elephants that may not be able to find enough food in the shrinking forests, leading to an increasing rate of human-elephant conflicts. Between 1991 and 2003, 93 people were killed by wild elephants the Kameng–Sonitpur area. During the same time frame, 52 elephants were found dead, 25 due to poisoning (Kushwaha and Hazarika, 2004).

In 2003, The Bodoland Territorial Council (BTC) Accord was signed between the Bodo Liberation Tigers and the central and state governments, to end the more than decade-long conflict by establishing the Bodoland Territorial Area District. The BTC comprises villages where more than 50 percent of the inhabitants identify as Bodo. The BTC was constituted according to the Sixth Schedule of the Constitution of India, which deals with tribal rights.

However, the population of the area has been increasing and pressures on the forests remain. Preventing forests and wildlife from being further degraded will require consideration of both socio-political and environmental issues, with a very important measure being to “strengthen the protection of existing nature reserves embedded in militant-affected areas.” write Velho and others in their paper. 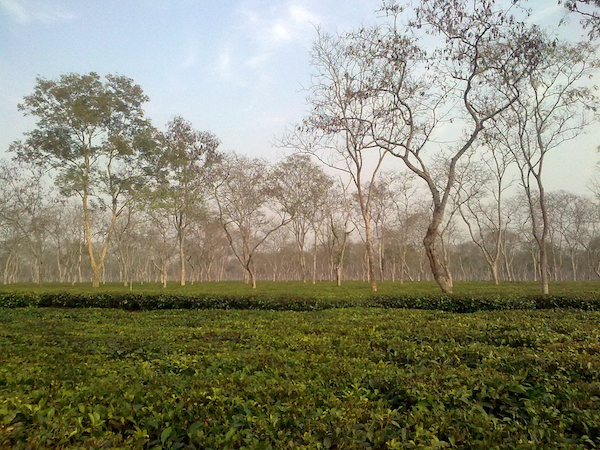 A tea plantation in Sonitpur, Assam. Photo by Amlan Basumatari.