This is what a million observations of species in nature look like mapped out over the world. Image courtesy of iNaturalist.

On Friday, Jonathan Hiew from Singapore took a photo of several insects and uploaded them on the citizen scientist site, iNaturalist. Little did he know that one of the photos, of a butterfly, would prove a record breaker: it was the millionth observation recorded on iNaturalist.

To commemorate the occasion, iNaturalist has released an interactive map showing just what one million observations looks like around the world. Zoom in closely enough, and you can click on any observation, uncovering more details.

“These maps show that by working together, individual naturalists can produce a record of nature bigger than any one person,” said iNaturalist co-director, Scott Loarie.

Begun as a Master’s project in 2008, iNaturalist was acquired this year by the California Academy of Science. The website’s primary purpose is to inspire people to observe and learn about the natural world around them, but it has also served science. Over half the observations made on the site to date have been deemed “research grade,” allowing scientists worldwide to use big data to better understand the distributions of species, especially as human impacts, such as climate change and habitat destruction, change them.

“Tools like iNaturalist enable anyone anywhere to help to fill gaps on our knowledge of species distributions,” said Donald Hobern the Executive Secretary of the Global Biodiversity Information Facility (GBIF), a scientific database that incorporates some oberservations from iNaturalist. “This information is now more important than ever to assist us in understanding how modern pressures are affecting wildlife. At the same time iNaturalist is a community that helps naturalists to learn from one another, so we have a growing body of people who understand nature better.” 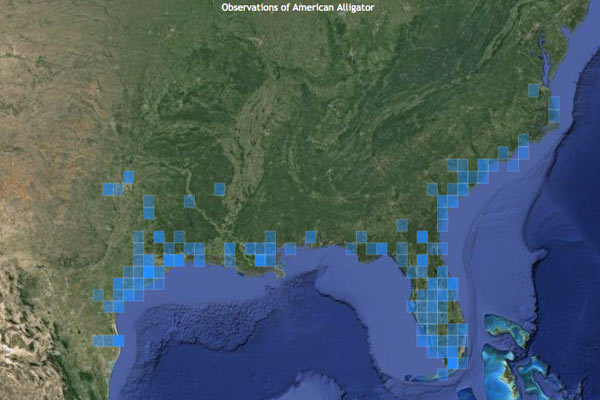 The observations for the American alligator (Alligator mississippiensis) mapped out. Image courtesy of iNaturalist.

Is the world moving backwards on protected areas?

(11/06/2014) Protected areas are undoubtedly the world’s most important conservation success story. But, despite this, progress on protected areas is stalling and in some cases even falling behind. According to a sobering new paper, only 20-50 percent of the world’s land and marine protected areas are meeting their goals, while the rest are hampered by lack of funding, poor management, and government ambivalence.

(10/30/2014) As if amphibians weren’t facing enough—a killer fungal disease, habitat destruction, pollution, and global warming—now scientists say that a second fungal disease could spell disaster for dozens, perhaps hundreds, of species. A new paper finds that this disease has the potential to wipe out salamanders and newts across Europe, the Middle East, North Africa, and the Americas.