Peatlands drained for a plantation in Riau.

An inter-agency audit of 17 plantation and timber concessions in Riau Province, Indonesia, found that every company is failing to meet fire prevention and control standards. In addition, several companies are working in prohibited areas, including peatlands with depths over 3 meters.

“Outrageous,” said Kuntoro Mangkusubroto, head of one of the agencies involved, the Presidential Working Unit for the Supervision and Management of Development (UKP4).

The audit came after a high number of hot spots were consistently recorded in Riau, a province on the island of Sumatra. Smoke from several thousand fires has pushed air pollution in neighboring Singapore to unhealthy levels.

The investigation was conducted from June through August by a joint task force consisting of UKP4, the Ministry of Forestry, BP REDD+, the Ministry of Agriculture, and the Ministry of the Environment. Concerns over the findings have echoed up and down the Indonesian government with representatives from multiple agencies making public statements expressing frustration at the results.

According to the head of the audit team, Bambang Hero Saharjo, several factors were scored during the process, including company organization and response systems, facilities and infrastructure, human and environmental resources, and conflict resolution mechanisms. He said it is not just enough that a company has the equipment and facilities in place, but they must also actively use those facilities.

“In one control tower, we found eagle eggs, a mat, and a guitar,” Bambang said. “There should be a GPS and other firefighting equipment.” 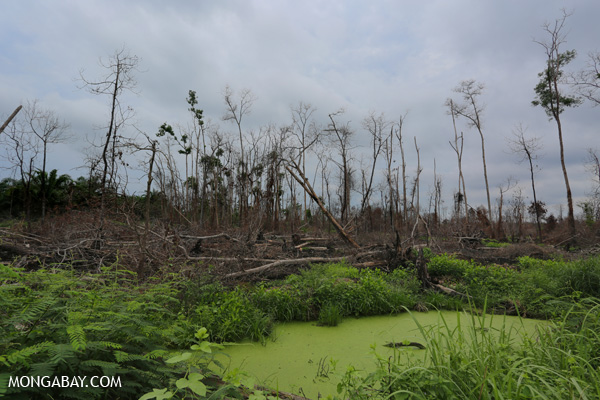 Burned acacia plantation in Riau. Fires can cause substantial losses to pulp and paper plantations.

Achmad Santosa, a representative of UKP4, said the poor results warrant immediate action. The team plans to return to Riau and deliver the findings directly to the companies, and will work with the government to ensure trouble areas be rectified in a timely manner. If companies fail to comply, he hopes to enact sanctions outlined in already existing regulations.

The team also audited government agencies from 6 districts. Although the results were somewhat more positive, only one district is ‘fully compliant,’ while one is ‘satisfactorily compliant’ and the remaining four ‘need improvement.’

The auditors found that government monitoring of concessions was inconsistent at best—with some companies having never been visited by government regulators.

“In fact,” Bambang said, “there are agencies which do not have any documentation at all on the companies they are supposed to be monitoring.”

Further, the auditors found little enforcement of peatlands protection laws, and other regulations. In several instances, the government agencies were not aware of their role and responsibility in the prevention and control of wildfires.

Later this month, the team will turn its attention to Central Kalimantan Province, on the island of Borneo—another area with a high density of hot spots.