100 million trees are cut down every year to make dissolving pulp for clothing, toothpaste, food

Dissolving pulp is not just a threat to the forests of Indonesia. It is a growing industry across the globe, and it’s putting several of the world’s endangered forests in jeopardy.

You might not have heard of dissolving pulp, but that doesn’t mean you aren’t connected to it.

The term “dissolving pulp” refers to wood pulp, bamboo pulp, or cotton pulp with cellulose content over 90 percent. It mostly gets used downstream in what’s called viscose fiber, which is made into textiles like Rayon, viscose, modal, or tencel–textiles you might very well be wearing right now. 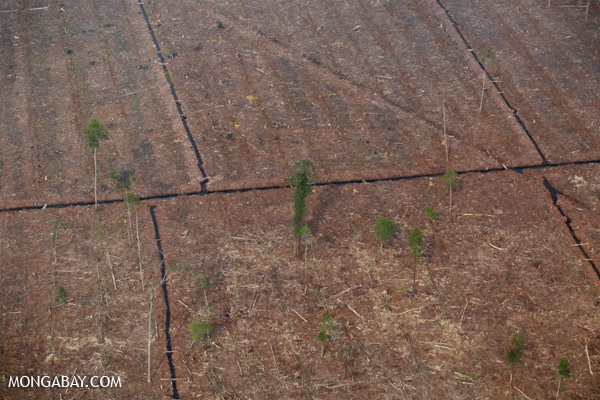 Peat forest cleared for an acacia plantation in Riau, Sumatra, Indonesia. Photo by Rhett A. Butler.

Last year, 6.3 million tons of dissolving pulp were produced worldwide. Most of that, roughly five tons, ended up in clothing, with the rest going into a variety of disparate items, from cigarette filters, toothpaste, and Post-It notes to food (when a food product lists “cellulose” as an ingredient, it generally means dissolving pulp).

But “the lion’s share ends up in clothing on sale in high-end boutiques and malls,” according to Canopy executive director Nicole Rycroft. The global market for dissolving pulp is expected to double by 2050, Rycroft said, which is why groups like Canopy and the Rainforest Action Network have recently launched campaigns to make the connection between forests being destroyed for dissolving pulp production and the world of high-fashion.

“What we’re seeing is this massive ramp-up in capacity,” Rycroft said. “Which only means one thing for endangered forests around the world, and endangered species, and it’s not a positive thing.”

By Canopy’s estimates, 100 million trees are cut down every year to make dissolving pulp that is destined for a second life as a piece of clothing, Rycroft said.

Because the yield is so low, there is a considerable advantage to companies having their mills producing dissolving pulp in close proximity to the wood source. That’s why the biggest dissolving pulp producing countries are those that are “timber rich,” in industry parlance.

The top five net exporters of dissolving pulp are South Africa (705,929 tons in 2012), Canada (678,861 tons), the U.S. (405,363 tons), Brazil (390,600 tons), and Sweden (375,987 tons). That’s where the majority of the world’s mills equipped to produce dissolving pulp are located, as well: There are seven in North America alone, situated close to the conifer forests of the U.S. Pacific Northwest and the Boreal forest in British Columbia and Alberta. There are at least two more in Brazil, in different parts of the Amazon, and one in Sweden.

While data on the exact forests being logged for dissolving pulp is difficult to come by—the companies doing the logging are, for obvious reasons, not forthcoming with these details—it is worth noting that South Africa, the world’s chief exporter of dissolving pulp, has lost 17 percent of its forest cover since 2012—almost 860,000 of 5 million hectares—according to data from Global Forest Watch. 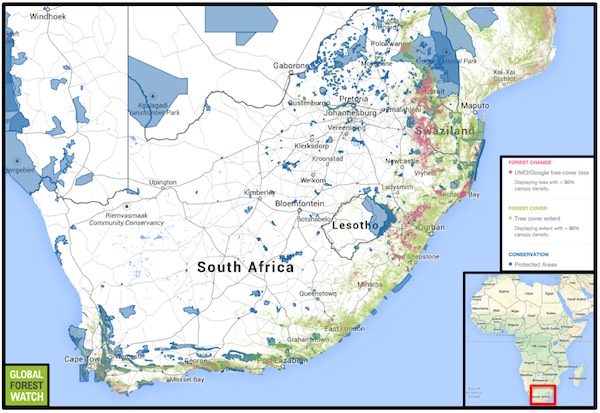 Lush forests in South Africa (with canopy cover greater than 30 percent) are largely relegated to a strip running along the country’s coast. Some of these “forests” are actually tree plantations destined for dissolving pulp and other industries. Overall, the country lost about 17 percent of its lush forest cover over 12 years, even in regions designated as Protected Areas. Map courtesy of Global Forest Watch. Click to enlarge. 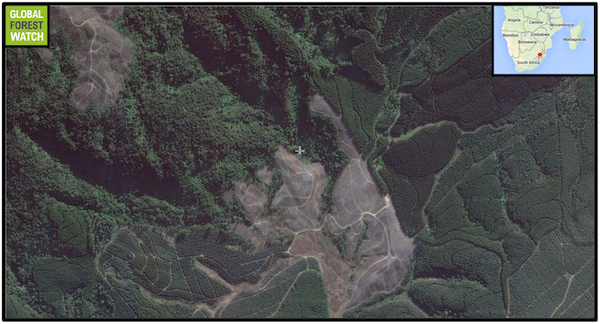 Although it is a net importer due to its domestic textile industry, Indonesia dissolving pulp production is on the rise as well. Palm plantations’ impact on the forests of Indonesia gets more press, but fiber plantations are actually responsible for more deforestation in the country, with1.9 million hectares of forest loss versus palm plantations’ one million hectares according to an article recently published in Conservation Letters.

Indonesia currently has the world’s highest annual rate deforestation. According to a study by researchers at the University of Maryland, 840,000 hectares of primary forest were lost in 2012 alone, despite high-level commitments by the Indonesian government to combat deforestation.

One of the only mills capable of producing dissolving pulp in Indonesia is owned by Toba Pulp Lestari, which has been singled out by activists at the Rainforest Action Network as “one of the worst actors in pulp and paper.” TPL has been accused of human rights violations on its plantations in regards to its labor practices, in addition to contributing to deforestation and loss of habitat for endangered species like the Sumatran orangutan.

Like TPL, which owns the forest concessions being logged to feed its own mill, the dissolving pulp industry as a whole is vertically integrated and concentrated, with just five companies–Aditya Birla Group, Lenzing, Rayonier, Sappi, and Sateri–accounting for 54.5 percent of dissolving pulp production.

Dissolving pulp is sourced from wood fiber plantations that, together with palm oil and timber concessions, create a patchwork landscape of deforestation across central Sumatra. The little intact forest remains has shrunk during the past 13 years. Map courtesy of Global Forest Watch. Click to enlarge.

Clearing of tree cover both for and in plantations is primarily responsible for Sumatra’s approximately seven million hectares of tree cover loss between 2001 and 2012. Map courtesy of Global Forest Watch. Click to enlarge.

One of the main drivers of growth in the industry is cotton prices, which dramatically increased in 2010 and 2011 due to widespread cotton crop failures. Since dissolving pulp from wood is a good substitute for cotton, this led to increased demand and higher prices. Plus, with paper being a mature market, companies were already looking to diversify.

But perhaps the biggest factor driving growth in the dissolving pulp sector is China.

The demand for viscous fiber in China is expected to continue growing at a rate of 10 percent for the foreseeable future, which will of course lead to an increase in demand for dissolving pulp. Efforts are underway to ensure that industry growth doesn’t come at the expense of the world’s endangered forests, such as commitments by several clothing companies to eliminate fiber produced by their destruction. Here’s hoping they’re not too late.

(10/30/2014) Several more clothing companies have committed to eliminate fiber produced via destruction of endangered forests, adding momentum to a zero deforestation movement within the fashion sector, argues a new report published by Canopy, an environmental non-profit.

(10/30/2014) While Asia Pulp and Paper (APP) has made considerable progress on addressing social and environmental problems associated with its operations in Indonesia, the forestry giant still has much to do to rectify historic social grievances in China, says a report published by Landesa and Rights and Resources Initiative (RRI).

(10/14/2014) An inter-agency audit of 17 plantation and timber concessions in Riau Province, Indonesia, found that every company is failing to meet fire prevention and control standards. In addition, several companies are working in prohibited areas, including peatlands with depths over 3 meters.

(09/17/2014) A group of palm oil and timber companies that have pledged to eliminate deforestation from their supply chains have agreed to establish a standard for determining what constitutes forest in terms of carbon storage.

(08/22/2014) Greenpeace Canada has filed a Statement of Defense in response to a $7 million lawsuit by Resolute Forest Products (NYSE:RFP) over allegations that the logging company destroyed forests in Quebec and Ontario.