Water, water everywhere but not a drop to drink

I moved to San Francisco six months ago and my umbrella hasn’t left its dusty sleeve yet. Scientists and politicians, everyone agrees: California is in deep trouble. As the state enters its fourth year of drought and the soil has never been drier. Some look at the sky with hope that El Niño will bring much needed rain. But most are starting to wonder if this is just the beginning. Are we entering a mega-drought that could last for more than a decade?

Agriculture, one of California’s strongest pillars, has taken the biggest hit: the drought will cost at least $2.2 billion in agricultural losses this year alone. Fields of dead almond trees and dried-out crops are a common sight in central California these days. Central Valley towns are also growing desperate. Many have been forced to install porta-potties in their backyards or even steal water from fire hydrants.

Despite the tremendous efforts for saving water, most Californians are still not aware of the magnitude of the problem.

Many believe that the drought can’t be that bad if water still comes out of everyone’s tap, right?

California is borrowing most of this water, either from neighboring states or depleting ground water reservoirs. But experts say this will come back to haunt Californians.

Mark Cowin, director of the California Department of Water Resources, told the Los Angeles Times that our current ground water withdrawal levels are so dangerous that “We are essentially borrowing on tomorrow’s future. We’ll pay that price over time.”

A recent study headed by climate scientist Noah Diffenbaugh of Stanford University linked the drought with human-made global warming and climate change. The paper concludes that “extreme atmospheric high pressure in this region–which is strongly linked to unusually low precipitation in California–is much more likely to occur today than prior to the emission of greenhouse gases that began during the Industrial Revolution in the 1800s.”

Diffenbaugh and his colleagues used computer simulations and statistical analysis to show that “a persistent region of high atmospheric pressure over the Pacific Ocean–one that diverted storms away from California–was much more likely to form in the presence of modern greenhouse gas concentrations.”

But could this go on for decades?

Mega-droughts, which last decades, are what Cornell University scientist Toby Ault calls the “great white sharks of climate: powerful, dangerous and hard to detect before it’s too late,” dubbing them “a threat to civilization.” 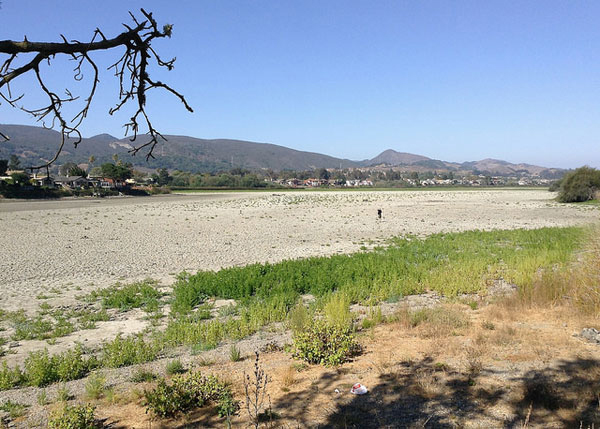 And he told USA Today that he’s “not optimistic” about the Southwestern U.S. avoiding a mega-drought.

“As we add greenhouse gases into the atmosphere -and we haven’t put the brakes on stopping this – we are weighting the dice for mega-drought conditions.”

If does become a mega-drought, Ault warned it could be “even worse than anything experienced by any humans who have lived in that part of the world for the last few thousand years.”

What can the state of California do to prepare?

Experts say that while water conservation is important, it won’t be enough. The state must also invest in new technologies like water desalinization plants.

“If California suffered something like a multi-decade drought, the best-case scenario would be some combination of conservation, technological improvements (such as desalinization plants), multi-state cooperation on the drought, economic-based water transfers from agriculture to urban areas and other things like that to get humans through the drought,” said University of Arizona climate scientist Gregg Garfin. 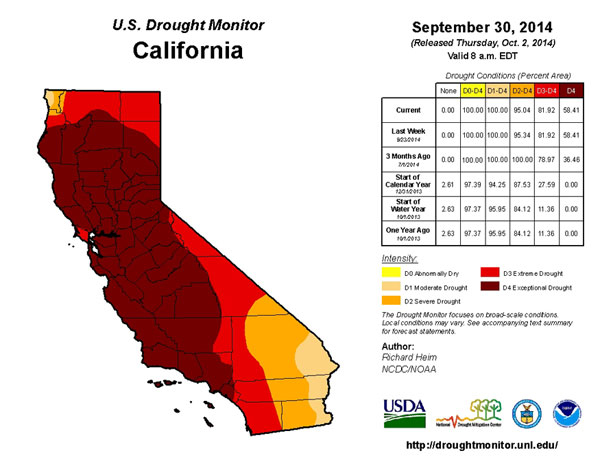 Extent of California’s drought as of late September. Image courtesy of Drought Monitor. Click to enlarge.

The county’s largest water desalination plant is being built in San Diego, and it’s expected to provide clean water to its residents by 2016. Some argue that the plant’s $1 billion price tag is too high, and that its technology is not advanced enough to be cost efficient.

California doesn’t have the oil reserves folks in the Middle East use to power their water desalination plants. But the state has a lot of something else: sunlight.

From all the companies perfecting water desalination technologies one stands out: WaterFX.

“Unlike conventional desalination, which uses a high-pressure reverse osmosis that forces salt and other solids through a membrane, WaterFX cleans water with a special Concentrated Solar Still. Solar thermal energy is used to evaporate and distill water at 30 times the efficiency of natural evaporation,” reads the WaterFX website.

”WaterFX process does not generate waste brine and instead utilizes ZDD (Zero Discharge Desalination) to produce only freshwater and solid salt as co-products,” said Aaron Mandell, founder and chairman of WaterFX. Contrasting with conventional desalination, which has 50 percent recovery, “ZDD operates at greater than 90 percent recovery and utilizes post processing to convert the remaining high concentration brine into salt crystals.”

Furthermore, he goes on to explain that “By efficiently harnessing solar energy, we can return hundreds if not thousands of megawatts back to the grid by displacing freshwater imports delivered through energy-intensive pumping stations.”

Mandell also argue that the cost will become price-competitive.

“As solar desalination scales up, the cost will continue to fall with improvements in process technology and manufacturing.”

With no rain, depleted reservoirs and dried up ground water wells, the only place left for California to look for water may be the ocean.

The world’s best mother: meet the octopus that guards its eggs for over four years

(07/30/2014) The ultimate goal of all species on the planet is procreation, the act of making anew. But few mothers could contend with a deep-sea octopus, known as Graneledone boreopacifica, which researchers have recently observed guarding its eggs for four-and-a-half years (53 months), before likely succumbing to starvation soon after.

(01/25/2014) A pair of satellite images released this week by NASA reveal the shocking impact of California’s drought, which is now entering its third year.

(01/20/2014) Twenty percent of China’s air pollution can be attributed to goods exported to America, with some of those emissions drifting back to the Western United States, finds a study published this week in the journal Proceedings of the National Academy of Sciences.