Ahead of the upcoming Climate Change Summit to be held in New York, September 23, a Filipino man who last year made headlines around the world on the subject is speaking out.

Philippine Climate Commissioner Naderev “Yeb” Saño delivered an impassioned speech at Warshaw, Poland at the United Nations Framework Convention on Climate Change last November. Just days before, super typhoon Haiyan had ripped through his country killing more than 6,000 people. It was the strongest storm of its type ever to be documented. Saño appealed to officials to take seriously the issue of climate change. 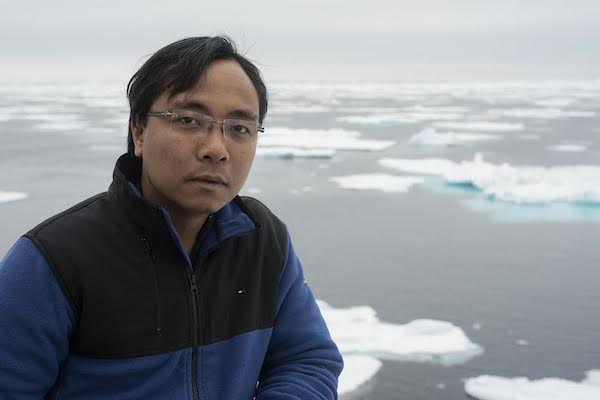 Yeb , Filipino Climate Change Commissioner, is sailing with Greenpeace to the Arctic Ocean. As the Arctic sea ice is about to reach its lowest extent of the year, commissioner Saño is at the ice edge with Greenpeace to demand that world leaders take action on climate change at the upcoming summit in New York. Photo taken Sept. 8, 2014, by Christian Åslund / Greenpeace.

Nearing the 10 month anniversary of the disastrous storm, Saño joined a Greenpeace expedition to Norway to witness the melting of glaciers around Svalbard. He said it was a profound and meaningful experience that is integral to understating how climate change impacts the world.

“Climate change is a problem. It’s a problem caused by humans and only humans can solve it,” Saño said.

He declared that it’s time for humanity to recognize and take responsibility for this challenge and that the resources to do so are available. He believes it’s an issue that will not be tackled on an international level, but is the kind of transformation that will need to happen in communities, cities, towns, businesses and organizations.

“I think it’s about finding the goodness in everyone’s hearts to turn things around,” Saño said. “Some people have asked me what I would say to those entities who continue to ignore this problem- I cannot think of a way to tell them and argue with them in a way that can change their minds if I discuss things from a technical or political point of view. However, I would probably ask them if they have children and can they look their children in the eye and tell them that they’re doing their best to leave their children a better world.” 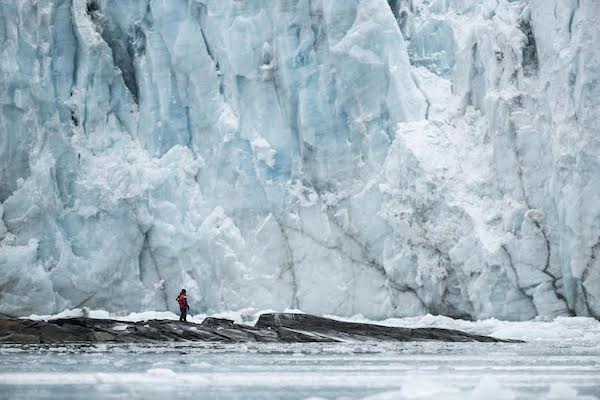 A father to a 10-year-old boy and seven-year-old girl, Saño acknowledged addressing this issue is easier said than done. The challenges are massive, which he summarizes via a point system he named the “Three As”: avarice, arrogance and apathy.

In a resolute attempt to demonstrate his deep concern for the climate, Saño embarked on a two-week fast following his speech at Warshaw. Many faith organizations from around the world including Lutheran, Catholic and Muslim groups came together to support his efforts. A campaign call to fast for the climate at the start of each month has since been established. Saño is heartened that faith groups have begun to embrace climate change that is unfolding at a global rate unprecedented in human history.

“It’s been a very deeply moving experience to see faith groups join this movement and it’s become part of what I would consider the global awakening on this issue,” he said. “It’s really great because I think people find it difficult to understand the technical issues around climate change and I think it’s important for us to translate all the scientific findings that we see into an ethical issue. That’s where the faith groups come in. I think it’s really a moral issue and it’s about how we relate to the source of life.” 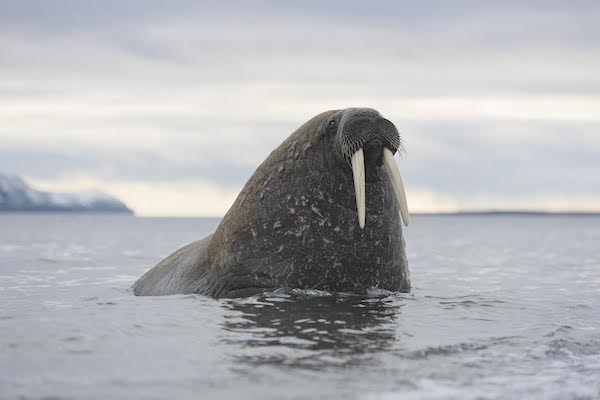 Walrus on the beach at Poolepynten, Prins Karls Forland, an island off the west coast of Oscar II Land on Spitsbergen in the Arctic archipelago of Svalbard, Norway. Sept. 10, 2014, by Christian Åslund / Greenpeace.

His father’s home town of Tacloban was hit hard by Haiyan, and nearly one year later the clean-up continues. Although one single weather event cannot be attributed to climate change, this particular typhoon was off the charts and Category 5 storms are becoming the norm in the Philippines.

The tropical country is considered one of the most threatened by the negative effects of global warming due to its geographic location as well as its level of development.

Having been thrust into the role representing his government on the issue of climate change seems a natural fit for Saño, and he considers himself to be a voice for the voiceless. The United Nations Climate Change Summit will see world leaders converge on the subject and while Saño wishes he could attend, he will be spending time helping people affected by last year’s typhoon in Tacloban. He is, however, encouraged as of late by U.S. President Barak Obama’s announcements to combat climate change.

“I think he’s put his political reputation at stake with some of his positions on climate change and that’s quite commendable,” Saño said. “I have faith in his sincerity to solve this problem.” 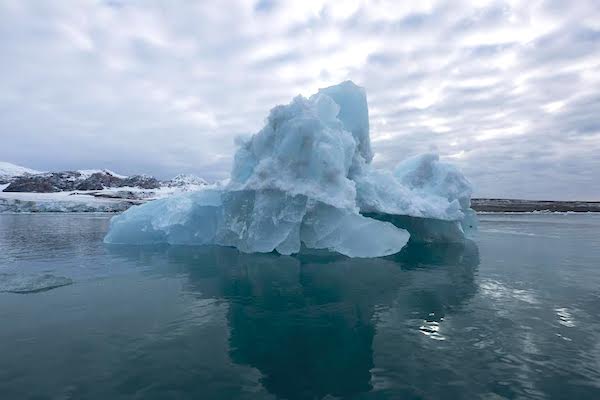 The partnership between Obama and U.S. Secretary of State John Kerry is one that Saño believes has the power to make substantial headway.

“In the history of the United States and the world we will probably will never see that tandem again and we have a window of opportunity to take climate change seriously. I have huge faith in what President Obama can do.”

There is a sense of urgency that Saño carries in this quest to leave a better world for future generations. To him it’s not merely about saving the planet or saving nature; it’s about saving people’s lives.

“I have a firm belief in the value of optimism in this age,” Saño said. “We have two choices – we can be resigned to the fact that we cannot do anything or we can be optimistic and remain courageous in the face of adversity; and I will choose the path of optimism.”

Although the road ahead looks bleak, Saño said he will continue to work for the cause.

“I don’t have the illusion that we can do this within our lifetime, but climate change is a battle we cannot afford to lose and so we will win this war.” 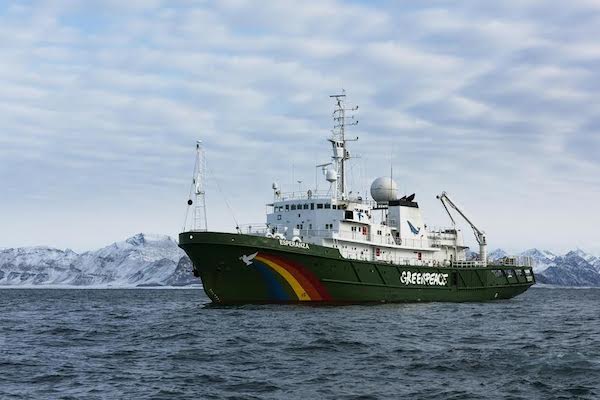 Greenpeace ship Esperanza at Svalbard in the Arctic Ocean to put the spotlight on climate change. Greenpeace is campaigning for a ban on offshore drilling in the Arctic, and for the uninhabited area around the North Pole to be declared a global sanctuary. Photo taken Sept. 9, 2014, by Christian Åslund / Greenpeace.

(08/22/2014) Every year, between 20 and 30 tigers are poached. Illegal logging is reducing the tigers’ habitat, and illegal hunting is reducing its food supply. However, these are not the only threats to wild tiger survival — other problems are cropping up and taking a toll on the iconic big cat.

(08/11/2014) Eelgrass is an important part of many ocean ecosystems, but is disappearing due to human impacts. However, a study published recently in found eelgrass beds could benefit from a restoration technique using seed-filled pearl nets.

(08/11/2014) A generation ago, Borneo was one of the wildest places on the planet. But decades of logging and oil palm plantations has changed the landscape of Borneo forever: in fact a recent study found that the island has lost 30 percent of its total forest cover since 1973. In the face of this large-scale environmental destruction, a new study finds that Indonesian Borneo’s children have a pessimistic view of their future.

Biomass burning accounts for 18% of CO2 emissions, kills a quarter of a million people annually

(08/05/2014) Biomass burning takes many forms: wildfires, slash-and-burn agriculture, clearing forests and other vegetation, and even industrialized burning for energy production. Yet this burning—mostly manmade but also natural—takes a massive toll both on human health and the environment.