Scientists have long studied how birds, mammals, and amphibians respond to forest degradation, but what about the most abundant animals in the forest? Insects. A new study in Biodiversity and Conservation looks at how ants and termites reacted to forest changes in Malaysian Borneo.

“It was really exciting to dig the soil out, see how many ants and termites you’d get, see if they were the same or different, and later to try and work out the things that might be affecting their distributions,” said lead author Sarah Luke with Cambridge University.

Ants and termites are considered the two most ecologically important insect groups because they provide a broad range of vital services including decomposition of leaf litter on the forest floor, seed dispersal, and nutrient and carbon cycling. But Luke’s research in Sabah, Malaysian Borneo, found that disturbed forests support different species and abundances of ants and termites than old-growth forests. 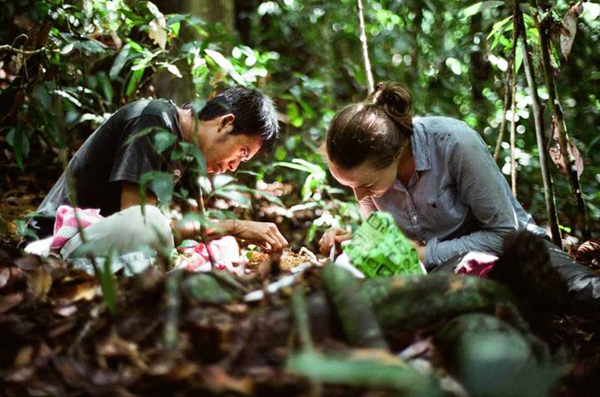 Sarah Luke and her assistant check for ant and termite communities. Luke says, “Rain forests are amazing places to work. They are hugely complex with lots of different microhabitats harbouring many different organisms, and insects in particular can be found everywhere. Turn over leaf litter on the forest floor, look into a dead log, spill a few rice grains on a path.. And insects will appear!” Photo credit: Tim Harvey-Samuel.

The research team sampled nearly 5,000 ants and 1,400 termites in three different habitats: an old-growth forest, a forest regenerating from logging, and an oil palm plantation. This is the first study of its kind to simultaneously document ant and termite groups within these three different kinds of forests, and it’s also the first to look at termites in oil palm plantations.

“We hope to understand how communities of these functionally important insect groups are affected by logging, forest fragmentation and oil palm agriculture, and how the important jobs that they perform may change in modified habitats,” Luke noted.

To do this, the researchers grouped ant communities by traits such as behavior and temperature preferences, and termites according to differences in food sources. Referring to these as “functional groups,” the researchers used them to better understand the ecological role of each insect community.

Luke and her colleagues found that overall ant abundances were far greater than termite abundances across all sites. Within the oil palm plantation, the scientists observed ants approximately 25 times more frequently than termites, which the authors suggest could indicate that ant’s have a higher resilience to disturbance.

While the researchers found no clear association between ant functional groups and the level of habitat degradation, all functional groups for termites were observed less frequently in the oil palm plantation and the logged forest than in the old growth forest. It may be that termites are much more dependent on old-growth forests than ants, perhaps given their dependence on cellulose found in the soil or plants.

Changes in these two groups of species “may cause fundamental shifts in the way tropical ecosystems function,” said Luke.

The state of Sabah is facing large-scale impacts on its forests from logging and clearing for oil palm plantations. According to Global Forest Watch, the state lost about 900,000 hectares between 2001-2013, representing about 15 percent of its forest cover. This loss hugely imperils the state’s biodiversity. 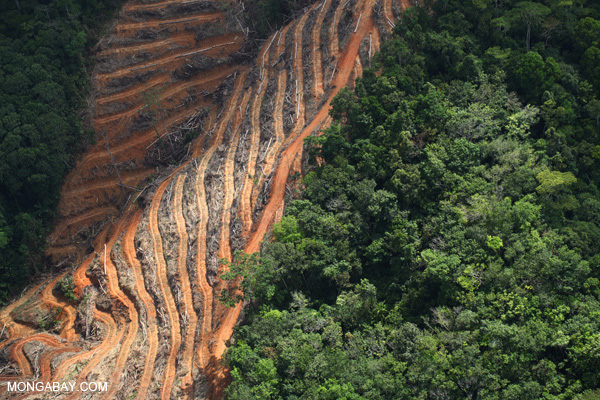 An oil palm plantation in Sabah. Photo by Rhett A. Butler / mongabay.com