by Morgan Erickson-Davis on 17 September 2014

Cowbirds ride cattle to pick off their parasites; egrets pal around with wildebeest and eat the small creatures disturbed by their grazing. But mammals riding other mammals is something long-thought pretty much isolated to humans and their domestic creatures. Then, earlier this month, a camera trap in a park in South Africa captured something that contradicts this assumption: a genet riding around on giant herbivores.

Conservationists working with the organization Wildlife Act set up camera traps in Hluhluwe-iMfolozi Park to non-invasively monitor the park’s wildlife. The park is home to a wide variety of species, including Africa’s “Big Five”: rhinos, elephants, buffalo, lions, and leopards. 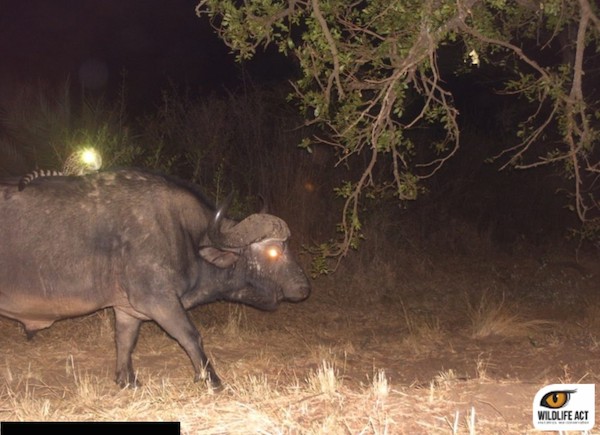 A genet rides a buffalo. Why? No one knows. Photo by Wildlife Act; more photos can be seen in their blog post.

Over the years, they’ve captured footage of many species, including African buffalo (Syncerus caffer) and common genets – spotted cat-like mammals that are related to mongooses and civets. But never together.

“I have personally never seen or heard of the following two species being seen together – never mind being caught doing what they did…” Zoe Luhdo, Wildlife Monitor at Zululand Rhino Reserve in South Africa, wrote in a Wildlife Act blog post describing the footage.

The photos show the genet (Genetta genetta) entering the scene from the right atop a buffalo. However, the buffalo appears to dislike the arrangement and shakes it off. Undeterred, the genet reappears in another photo on the back of another buffalo, this one more tolerant of a small spotted hitchhiker, allowing it to stay onboard.

Then, in the same night, the genet was captured again at the same photo trap sites – this time aboard a rhino. And on another rhino three nights later. And another the night after that. And again four nights later. 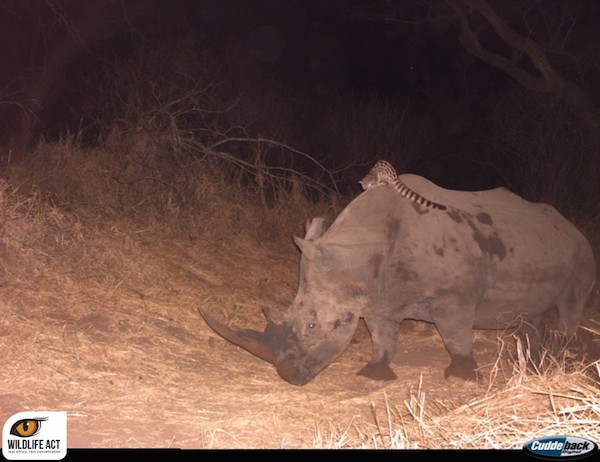 A genet rides a rhino, again for reasons unknown. Photo by Wildlife Act; more photos can be seen in their blog post.

But why would a genet ride on the backs of buffalos and rhinos? Was it using them as a vantage from which to see prey? Or just as a way to move around its environment without expending much energy? No one knows for sure yet, but the many pictures of the genet riding many other animals indicate this behavior is definitely not an isolated event.

“I can only speculate as to why this genet decided that hitch-hiking was a good idea, but can confidently say that this is fantastically bizarre,” Ludho said.

(08/13/2014) If someone told you there was a place where 200 million year old coral reefs had erupted from beneath the sea and were now draped in the oldest rain forest in the world, a place where marbled cats and clouded leopards prowl the sharp crags and their dark caves in search of dead bats and small prey, would you believe them?

(07/21/2014) After more than four and a half years of camera trap footage, the results are encouraging: 36 mammal species, of which more than half are legally protected, are prospering in this most surprising of spots: an oil palm plantation in the province of East Kalimantan in Indonesian Borneo.

On babies and motherhood: how giant armadillos are surprising scientists (photos)

(07/01/2014) Until ten years ago scientist’s knowledge of the reproductive habits of the giant armadillo— the world’s biggest— were basically regulated to speculation. But a long-term research project in the Brazilian Pantanal is changing that: last year researchers announced the first ever photos of a baby giant armadillo and have since recorded a second birth from another female.

(06/23/2014) Photo trapping is a popular technique for gathering images and information about elusive wildlife. Recently, camera traps captured the first-ever images of wild flat-headed cats in the Pasoh Forest Reserve, an unexpected find in the forestland southeast of Kuala Lumpur, according to a new report in mongabay.com’s open access journal Tropical Conservation Science.