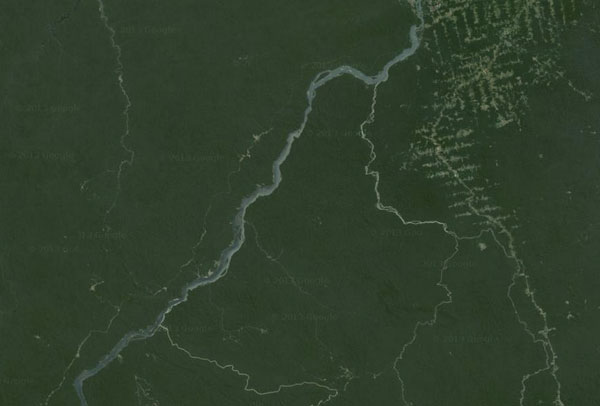 A plan to build a dozen dams in the Tapajós river basin would drive the loss of an additional 950,000 hectares of rainforest by 2032 by spurring land speculation and mass migration to the region, suggests a new study published by Imazon, a Brazilian NGO.

The analysis, which forecasts deforestation beyond direct forest losses from inundation and road construction, says the dams would increase deforestation by 8.3 percent compared to a no-dams scenario. Greenhouse gas emissions from would also rise, undermining the carbon savings often associated with hydroelectric projects.

Imazon estimates that the dams would also increase the risk of deforestation in 44 of the region’s 43 protected areas and indigenous reserves. The influx of some 63,000 permanent immigrants would be a key factor in increasing forest destruction, according to the study.

Imazon says that deforestation risk could be reduced by increased oversight of the projects and the creation of new protected areas, both of which should be included in cost projections for the projects.

The Tapajós is considered one of the last “wild” tributaries of the Amazon River, but like rivers across the region, it has been targeted by the Brazilian government under a massive dam-building spree. Brazil is planning 30 large Amazon hydroelectric projects for the next decade.

Environmentalists worry that the extent and scale of dam-building could disrupt the ecology and nutrient cycling of Earth’s largest rainforest. There are also concerns about the impacts on fish migration, local livelihoods, and land use practices. Some experts say that many of the dams could be avoided by improving energy efficiency and developing other sources of renewable energy in Brazil.