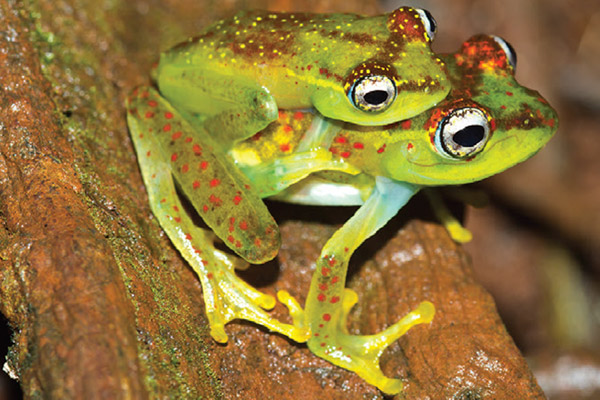 Sometimes all it takes is fewer clicks. Scientists have discovered a new species of frog from Madagascar that stuck out in part because it “clicked” less during calls than similar species. Unfortunately the scientists believe the new species—dubbed the Ankarafa skeleton frog (Boophis ankarafensis)—is regulated to a single patch of forest, which, despite protected status, remains hugely threatened.

“All individuals were detected from the banks of two streams in Ankarafa Forest,” the researchers write in the paper, adding that “despite its conspicuous call, it has not been detected from other surveys of northwest Madagascar and it is likely to be a local endemic to the peninsula.”

Endemic means it is found in a single location. In this case, all Boophis frogs, commonly called skeleton frogs due to their somewhat see-through skin, are only found in Madagascar and the nearby Comoros Islands. But Ankarafa skeleton frog appears to be only found in the forest it is named after.

Although similar looking to another species Boophis bottae, the scientists found that the Ankarafa skeleton frog sang with a faster pulse and usually clicked twice rather than three times. Frog songs are highly linked to species differentiation as they are used to help individuals tell different species apart. Ankarafa skeleton frog’s distinctness was further proved by genetic testing, which found significant difference between it and other Boophis species.

Yet, the Ankarafa skeleton frog’s future is by no means secure.

“The frog was only found within intact forest and appears sensitive to anthropogenic disturbance,” the researcher’s write adding that “despite its protected status, Ankarafa is experiencing widespread deforestation, furthermore much of this destruction is concentrated on the streamside forests which this species relies upon.” 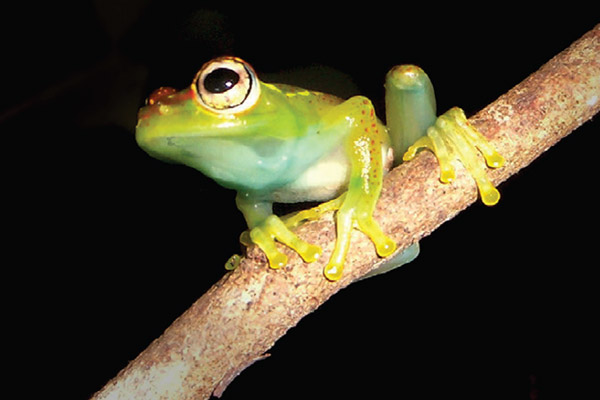 The Ankarafa skeleton frog is believed to be Critically Endangered. Photo by: Gonçalo M. Rosa.

The forest is threatened by slash-and-burn agriculture, logging, and burning of adjacent grasslands—in fact the researchers warn that a single, big fire could potentially wipe-out the species entirely.

Given this, the researchers suggest that the species be listed as Critically Endangered by the IUCN Red List.

“A halt to all forest destruction and agricultural practices within the park must occur immediately to stop any further decline of Sahamalaza’s endemic amphibian fauna, or risk their possible extinction within the near future,” the researchers recommend.

There are 70 known species of frogs in the Boophis genus currently, but new ones are increasingly popping up as herpetologists—those who study amphibians and reptiles—undertake increased surveys across Madagascar.

Amphibians are among the most imperiled groups on the planet currently. They have been hugely hit by habitat loss, deforestation, water pollution, and on top of all that a killer infectious disease, chytridiomycosis, which is caused by a fungus. Currently, the IUCN Red List estimates that just over 40 percent of the world’s amphibians are threatened with extinction. 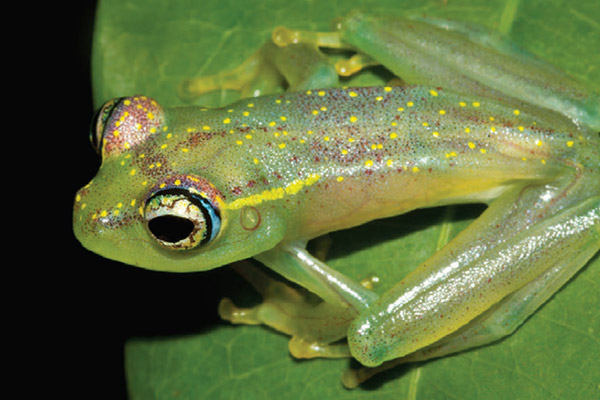 The Ankarafa skeleton frog. The frogs are called ‘skeleton’ because of their semi-transparent skins. Photo by: Gonçalo M. Rosa.

Next big idea in forest conservation? Rewards for reforestation

(07/10/2014) Susie McGuire and Dr. Edward Louis Jr. are the powerhouse team behind the Madagascar Biodiversity Partnership (MBP), an NGO that involves local residents—both human and primate—in reforestation efforts in Madagascar. A conservation geneticist and veterinarian by training, Ed Louis has discovered 21 lemur species and successfully reintroduced two species of locally extinct lemurs back into the wild.

(06/16/2014) Experts have added 817 species to the threatened categories of the IUCN Red List in the latest update. Those added include 51 mammals—mostly lemurs—and over 400 plants. The new update finds that over 90 percent of lemurs and 79 percent of temperate slipper orchids are threatened with extinction.

(06/03/2014) Authorities in Singapore have made the largest-ever international seizure of rosewood logs, providing further evidence that industrial-scale smuggling of Madagascar’s rainforest timber continues despite an official ban on the trade. Details of the seizure remain sparse since the investigation is still active, but leaked correspondence between officials in Madagascar indicates that the shipment amounts to 3,000 tons, or more than 29,000 illicit rosewood logs.

(05/22/2014) Dr. Christopher Golden is an explorer on a mission. As both an epidemiologist and ecologist, he is investigating and expanding the interface between human and ecosystem health. This year, Golden was appointed the Director of Wildlife Conservation Society’s HEAL (Health & Ecosystems: Analysis of Linkages) Program.

(05/17/2014) Lemur expert Patricia C. Wright has become the first woman to win the prestigious Indianapolis Prize, an award granted every two years for achievement in wildlife conservation. Wright was chosen for her contributions to wildlife conservation in Madagascar, where she’s worked with lemurs for nearly 30 years.

(03/20/2014) One of the world’s biggest populations of greater bamboo lemurs (Prolemur simus)—sometimes known as the panda lemur—has doubled in just three years, giving conservationists new hope that the species can be kept from extinction. With the recent arrival of twenty babies, a community conservation project run by the Aspinall Foundation has boosted the local population to over 100 individuals in Andriantantely, one of Madagascar’s only surviving lowland rainforests. Greater bamboo lemurs are currently categorized as Critically Endangered, though they were once believed extinct until hidden populations were uncovered in the 1980s.