Polar bears are big animals. As the world’s largest land predators, a single male can weigh over a staggering 700 kilograms (about 1,500 pounds). But as impressive as they are, it’s difficult to imagine counting polar bears from space. Still, this is exactly what scientists have done according to a new paper in the open-access journal PLOS ONE.

Using high-resolution satellite imagery, researchers counted the population of polar bears (Ursus maritimus) on Rowley Island in Foxe Basin in the Canadian Arctic. Many polar bears use Rowley Island during the summer months when the snow has melted away and they must while away the months before the return of sea ice. The polar bears were possible to spot here because the island, covering about 1,090 square kilometers (420 square miles), is flat and dark after the snowmelt.

“We were able to discriminate among presumed bears and non-targets by comparing high resolution images collected at different points in time,” the researchers write. In other words: if a bright speck was in one image, but absent in another taken later than it was likely a polar bear.

In all the researchers estimated that around 90 bears were present on the island. But to test their count, they tried a more standardized method. They flew over the island in a helicopter in a traditional aerial survey. Here they estimated the population was 100 individuals.

The researchers write that the “remarkable consistency” between these two counts implies that their satellite imagery count “was quite accurate.”

As the Arctic’s sea ice vanishes due to global warming, scientists are gravely concerned for the longterm survival of polar bears. Since these great bears depend on seasonal sea ice for hunting seals, less sea ice means further to swim and more energy exerted to make a kill. In the end, scientists expect more-and-more polar bears to perish from starvation. 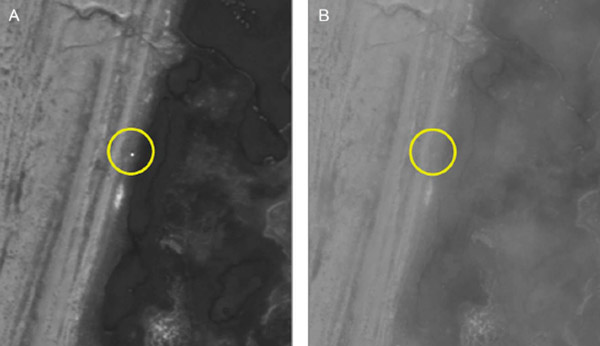 Polar bear circled in yellow on the left. On the right: the same area only without the polar bear. Photo by: Stapleton et al.

“A nearly ice-free summer is now forecasted to occur as early as 2016,” the authors write. “Such large-scale, precipitous environmental changes will be detrimental for many species dependent on sea ice habitats.”

Yet even as scientists warn about the rising threats to polar bears, they are scrambling to get good data on populations.

“Data are insufficient to assess polar bear status across large portions of their range; even in surveyed areas, monitoring intervals are often inadequate,” the researchers write. Gathering data in the region is not only difficult, but also expensive. However, counting polar bears from space could change this.

The scientists say the next step is to develop an “automated image classification processes” to quickly count the bears, as this initial survey took over 100 total hours.

Currently, polar bears are listed as Vulnerable by the IUCN Red List with a total population of around 20,000-25,000. However this estimate hasn’t been updated in over six years.

“The success of this technique with polar bears suggests that satellite imagery would likely provide a useful means to inventory
other megafauna as well,” the authors write. “In the Arctic, darker species such as musk oxen (Ovibos moschatus) and caribou (Rangifer tarandus) may be readily detected against a snow-covered, springtime landscape.”

Many Arctic species are believed to be imperiled by climate change, especially as the region is warming here faster than anywhere else in the world. Yet few species in the region have been adequately surveyed. In fact, even some large mammals, such as walrus and ribbon seal, are listed as Data Deficient by the IUCN Red List due to a dearth in data. 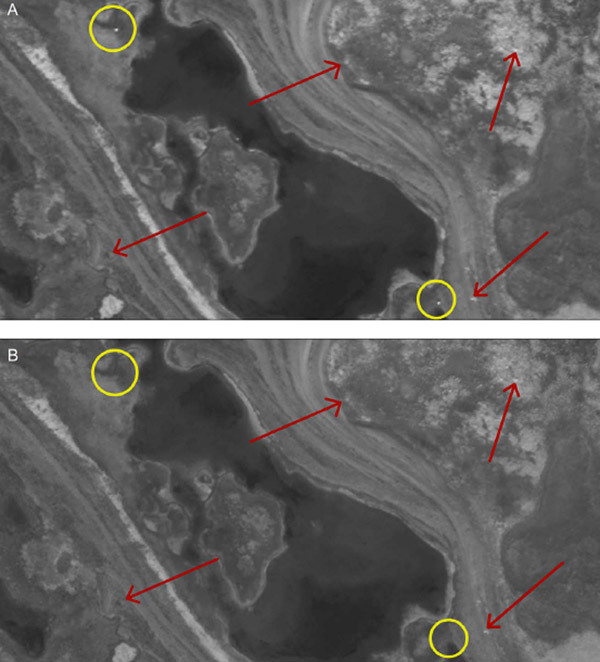 Polar bears circled in yellow on top, but absent from yellow circles on the bottom. Arrows highlight landscape features, such as rocks, that don’t move. Photo by: Stapleton et al.

(05/03/2012) Polar bears (Ursus maritimus) are capable of swimming incredible distances, according to a new study published in Zoology, which recorded polar bears regularly swimming over 30 miles (48 kilometers) and, in one case, as far as 220 miles (354 kilometers). The researchers believe the ability of polar bears to tackle such long-distance swims may help them survive as seasonal sea ice vanishes due to climate change.