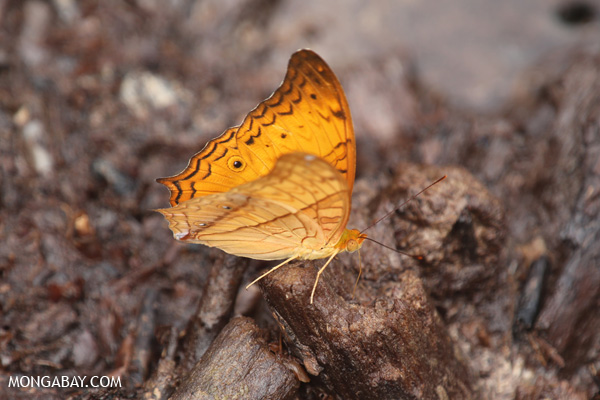 Unknown orange butterfly in Sumatra. Scientists believe we are in the midst of a defaunation crisis, which is impacting animals, and ecological services, the world over. Photo by: Rhett A. Butler.

Get ready to learn a new word: defaunation. Fauna is the total collection of animals—both in terms of species diversity and abundance—in a given area. So, defaunation, much like deforestation, means the loss of animals in all its myriad forms, including extinction, extirpation, or population declines. A special issue in Science today shines light on this little-discussed global trend and highlights how it’s impacting human society.

“Though for emotional or aesthetic reasons we may lament the loss of large charismatic species, such as tigers, rhinos, and pandas, we now know that loss of animals, from the largest elephant to the smallest beetle, will also fundamentally alter the form and function of the ecosystems upon which we all depend,” writes Sacha Vignieri, an Associate Editor with Science in an introduction on the issue.

Starting with the bigger—more well-known—species, vertebrate populations on average have declined by over a quarter in the last forty years, according to a review paper in the issue. Such numbers are borne out by a lot of anecdotal reporting of the “empty forest” syndrome, where scientists are noticing more-and-more seemingly intact forests and other habitats that have been stripped of their medium to large vertebrates.

Meanwhile at least 322 vertebrates have gone extinct since 1500, a trend in human-caused extinctions that likely began during the Pleistocene. Many additional vertebrates remain unrecorded for decades and could be extinct.

But “fauna” also extends to invertebrates, which really comprise the vast bulk of the world’s animals. Most of these animals—which includes everything from insects to mollusks and jellyfish to spiders—have been far less studied than the world’s vertebrates and so much less is known about how imperiled they are and their population trends. Still, the data that we do have is not good.

A global review of 452 invertebrates find that these populations have fallen by 45 percent over the last 40 years. The best data is in the Lepidoptera family—moths and butterflies—which shows a drop in abundance of about 35 percent.

“We were shocked to find similar losses in invertebrates as with larger animals, as we previously thought invertebrates to be more resilient,” said Ben Collen with University College London, co-author of the review study. “While we don’t fully understand what the long-term impact of these declining numbers will be, currently we are in the potentially dangerous position of losing integral parts of ecosystems without knowing what roles they play within it.”

Of course, it must be noted that to date 1.4 million invertebrates have been described, so this monitoring covers only 0.03 percent of the world’s known invertebrates. Still, other data shows similar troubling trends.

“Although less than one percent of the 1.4 million described invertebrate species have been assessed for threat by the IUCN, of those assessed, [about] 40 percent are considered threatened,” reads the paper. “Similarly, IUCN data on the status of 203 insect species in five orders reveal vastly more species in decline than increasing.”

In fact the issue of defaunation is so troubling that lead author, Rodolfo Dirzo with Stanford University, told mongabay.com it should become as well-known to scientists and policy-makers as deforestation.

“The term deforestation readily conveys the notion of a serious, dramatic anthropogenic impact and can move [and] has moved society to action given its consequences,” he noted, adding that “we are beginning to see that defaunation is omnipresent and of great intensity…we need to pay attention to its consequences and significance for society at large.” 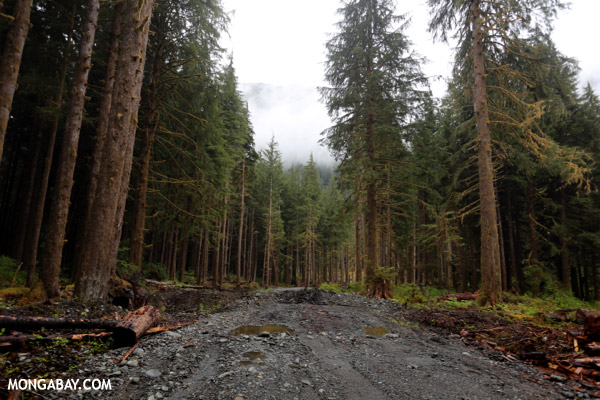 Habitat loss is currently the largest driver of defaunation. Here a logging road cuts into forest in the Pacific Northwest of the U.S. Photo by: Rhett A. Butler.

Experts say defaunation is already having large-scale impacts across ecosystems, undercutting everything from pollination to pest control to water and soil quality. For example, a flood of recent research has found that the world’s pollinators may be in crisis—including bees and butterflies—threatening global agriculture and potentially costing billions.

But the impacts of defaunation could even lead to worsening outbreaks of disease in humans.

“Consider the case of heavy defaunation of large wildlife in Africa,” Dirzo said. “When that happens, according to our own research, the abundance of rodents increases; this implies more vectors and host of diseases, many of which are of great…significance to humans. We recently published another study showing that such differential defaunation in African savannas explains the increase in abundance of rodents and doubles the risk of Bartonellosis—a nasty disease in humans.”

Defaunation can also result in co-extinctions. For example, many animals are ecologically connected to plant species, who may depend on them for pollination or seed dispersal. But if you lose the animal species—or if its population drops below a certain threshold—plants are likely to vanish as well.

“Who would have thought that just defaunation would have all these dramatic consequences? But it can be a vicious circle,” Dirzo noted.

The causes behind defaunation are clear and have been for decades: habitat loss including deforestation; overexploitation of species for bushmeat, medicine, or trophies; and invasive species rank as the big three according to the paper.

“None of these major drivers have been effectively mitigated at the global scale. Rather, all show increasing trajectories in recent decades,” the scientists write in the paper.

Worse still, the paper warns that “climate disruption” could eclipse all of these as a driver of mass extinction in the near-future. Native to Madagascar, the radiated tortoise is currently listed as Critically Endangered. Photo by: Rhett A. Butler.

“Two critical drivers of defaunation can and should be addressed as soon as possible: over-exploitation (consider the case of illegal trading and hunting, currently in the order of tens of millions of animals killed per year) and habitat destruction via land use change (deforestation, fragmentation),” Dirzo told mongabay.com. “These drivers could be addressed and help us buy time to start addressing the other drivers, particularly climatic disruption as we move forward.”

Repairing—as much to our ability—damaged ecosystems may become controversial as well. Another paper in the issue recommends radical conservation measures, such as introducing non-native species environments in order to take-over the ecological roles of already-lost species. Surrounded by exotic meats, a vendor reaches for live bamboo rat in a bushmeat market in Laos. Photo by: Rhett A. Butler.

Too much of a good thing: fertilizer ‘one of the three major drivers of biodiversity loss this century’

(07/14/2014) The world’s grasslands are being destabilized by fertilization, according to a paper recently published in the journal Nature. In a study of 41 grassland communities on five continents, researchers found that the presence of fertilizer weakened grassland species diversity.

(07/14/2014) The world’s 35 biodiversity hotspots—which harbor 75 percent of the planet’s endangered land vertebrates—are in more trouble than expected, according to a sobering new analysis of remaining primary vegetation. In all less than 15 percent of natural intact vegetation is left in the these hotspots, which include well-known jewels such as Madagascar, the tropical Andes, and Sundaland.

Booming populations, rising economies, threatened biodiversity: the tropics will never be the same

(07/07/2014) For those living either north or south of the tropics, images of this green ring around the Earth’s equator often include verdant rainforests, exotic animals, and unchanging weather; but they may also be of entrenched poverty, unstable governments, and appalling environmental destruction. A massive new report, The State of the Tropics, however, finds that the truth is far more complicated.

(06/26/2014) It took humans around 200,000 years to reach a global population of one billion. But, in two hundred years we’ve septupled that. In fact, over the last 40 years we’ve added an extra billion approximately every dozen years. And the United Nations predicts we’ll add another four billion—for a total of 11 billion—by century’s end.

(05/29/2014) Current extinction rates are at the high end of past predictions, according to a new paper published today in Science, however conservation efforts combined with new technologies could make a big difference. New research led by Stuart Pimm of Duke University argues that humans have pushed the current extinction rate to 1,000 times the historical rate.