The world’s worst Ebola outbreak was likely begun by a hunter shooting a fruit bat for their dinner or the market, according to the UN. The outbreak has killed over 660 people in six months to date, and recently spread via plane to Nigeria. The disease is particularly deadly with a mortality rate of around 90 percent.

“We are not suggesting that people stop hunting altogether, which isn’t realistic,” said FAO Chief Veterinary Officer Juan Lubroth this month. “But communities need clear advice on the need not to touch dead animals or to sell or eat the meat of any animal that they find already dead. They should also avoid hunting animals that are sick or behaving strangely, as this is another red flag.”

However the FAO does recommend avoiding killing or eating fruit bat altogether. Scientists believe fruit bat, which is eaten in West Africa either dried or in a soup, is the most likely source of the current epidemic. Fruit bats, which are also known as flying fox, can be infected with Ebola without showing any obvious signs. 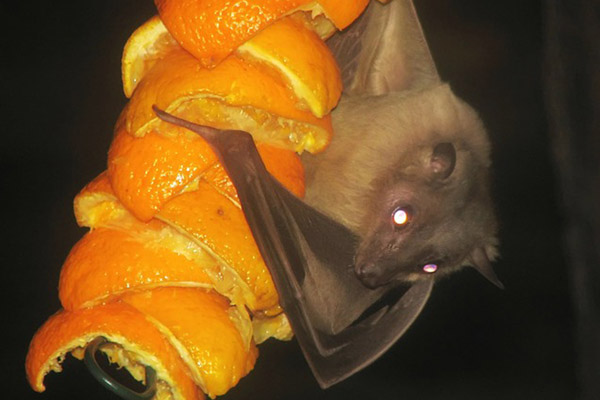 Egyptian fruit bat. There are over 180 species of fruit bat, which are also known as flying foxes, and make-up the world’s largest bats. Photo by: Public Domain.

“The virus is killed when meat is cooked at a high temperature or heavily smoked, but anyone who handles, skins or butchers an infected wild animal is at risk of contracting the virus,” added Lubroth. Ebola is spread via the blood or other bodily fluids of anyone infected—either human or animal. In addition to fruit bat, the virus could possibly be spread by other popular bushmeat animals such as primates, rodents, and duikers, which are small antelopes.

Currently, there is no cure or vaccine for the disease.

“It is critical for rural communities to understand the risks, both of human-to-human transmission and from wildlife, so that they are in a position to make informed decisions themselves,” said Katinka de Balogh, a veterinary public health officer with the FAO.

(07/28/2014) One of the world’s most bizarre animal groups is now at risk of complete eradication, according to an update of the IUCN Red List. Pangolins, which look and behave similarly to (scaly) anteaters yet are unrelated, are being illegally consumed out of existence due to a thriving trade in East Asia.

A taste for wildlife: what’s driving bushmeat hunting in Tanzania?

(06/25/2014) Barbed-wire snares, spent shotgun shells, the lingering smell of gunpowder, and strips of curing meat: glimpses from a bushmeat hunt. Bushmeat hunting is the illegal hunting of wildlife for food and income. A new study reports regular bushmeat consumption by a large proportion of Tanzania’s tribal populations. Co-authors Silvia Ceppi and Martin Nielson were hunting for their own answers: who was eating bushmeat and why?