Yasuni National park has been in the conservation spotlight in recent years, with oil drilling threatening the forests and wildlife of this biodiversity hotspot. Recently, disturbance in the park may have ramped up, with satellite data showing a significant increase in deforestation alerts within Yasuni National Park since 2011.

The increase in forest damage in the region coincides with a series of oil drilling activities near the blocks where deforestation alerts are clustered.

Yasuni National Park, established in 1979, covers approximately 982,000 hectares. The park is at the center of a small zone where amphibian, bird, mammal, and vascular plant diversity are all at the highest levels in the Western Hemisphere. Because of this, it is among the most biodiverse places in the world, with a large number of endemic and threatened species. For instance, the park is home to a species of bat (Lophostoma yasuni) found nowhere else in the world. 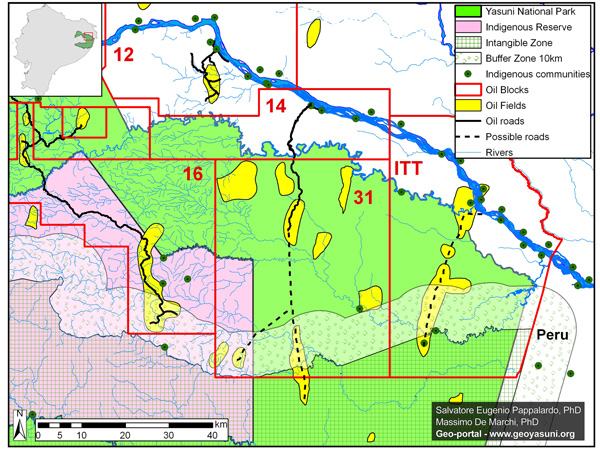 However, Yasuni National Park is also home to an estimated 846 million barrels of oil.

Despite its status as a protected area, energy companies have been drilling in Yasuni National Park has been the site of oil extraction since the 1970s. However, its most remote portions have been left untouched. Surveys indicate Yasuni’s oil field contains about 20 percent of Ecuador’s fossil fuel reserves, particularly in a portion of the park referred to as the ITT (Ishpingo-Tambococha-Tiputini) blocks. A protection proposal called the Yasuni-ITT Initiative was launched by president Rafael Correa at the U.N. General Assembly in 2007. The Initiative would have kept these blocks untouched if international donors paid half the expected revenue of oil extraction—$3.6 billion—into a trust fund set up by the United Nations Development Program. The international community pledged around $330 million, although only deposited $13 million, before Correa formally ended the initiative in 2013.

Data from Global Forest Watch shows increasing disturbance in the park, with 1,416 FORMA Alerts from 2011 to June 2014. Most of the alerts are located near oil wells in the northern and central region – or parts of oil blocks 14 and 16. Block 14 is currently under the control of Chinese-owned Andres Petroleum Company, while Block 16 is under Repsol. FORMA Alerts (Forest Monitoring for Action) are used to determine areas of probable forest damage via remote sensing data and satellite information from sources like Google and NASA. 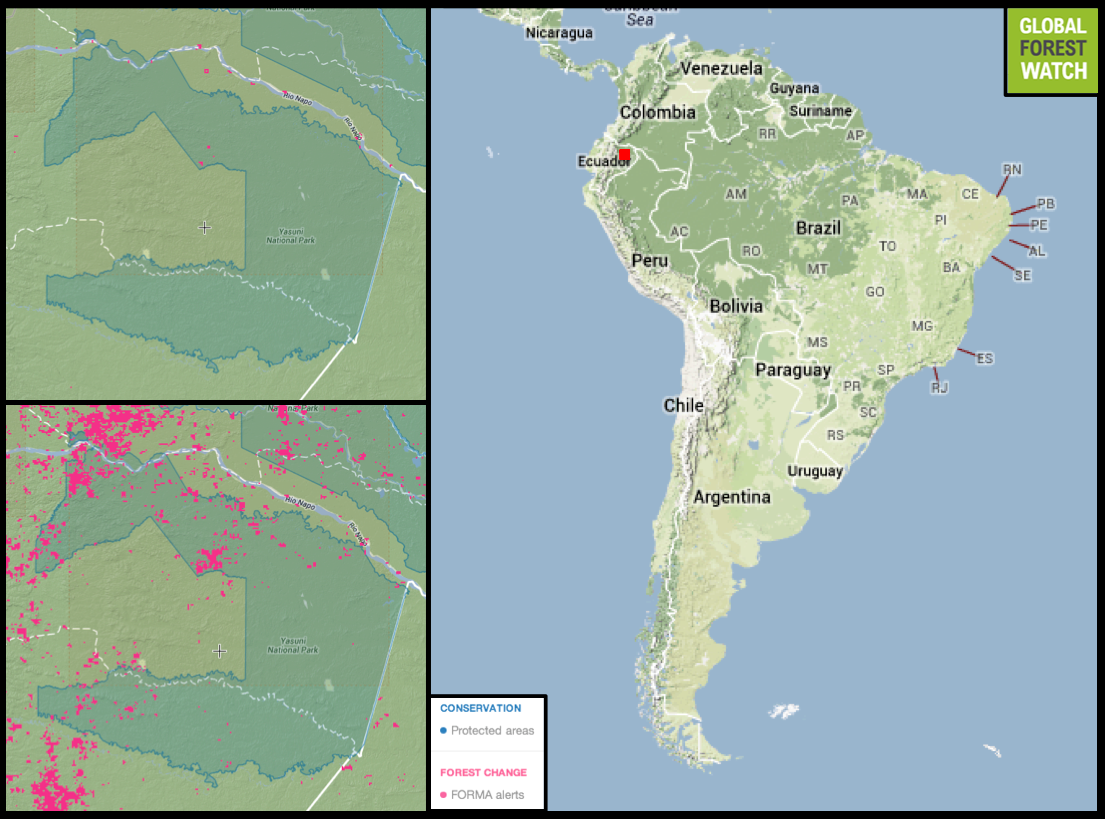 In addition to drilling, other human activities are impacting Yasuni National Park.

“Deforestation is not only caused by extraction, but also by the outside influence of other industries/actors – including drug trade, illegal animal poaching/sales, illegal logging,” Pamela Martin, a professor at Coastal Carolina University who has conducted research on Ecuadorian forests, told mongabay.com.

According to Martin, illegal loggers are cutting deeper and deeper into Yasuni, and in the process building roads that are allowing people to further encroach into the forest.

“Roads built in the park have increased colonization in those areas,” she said. “One outcome of such roads and the associated deforestation impacts, plus weaponry to hunt, is over-hunting and illegal poaching of animals.”

Conservationists have long opposed oil drilling, logging and other clearing activities inside the park because of the threats they pose to its biodiversity. But Martin also said that communities that live in voluntary isolation in the park, such as the Tagaeri and Taromenane, may also be impacted by forest loss as their homes are exposed to the outside world.

In addition to providing vital habitat, mature tropical rainforest in the park also acts as a climate and water regulator. In addition, as oil is extracted and burned, the greenhouse gas load of the atmosphere will increase, exacerbating global warming.

“In the long term, activities that promote deforestation, such as extraction, will have to be weighed against the overarching norm of well-being, sumak kawsay, for societies, nature, and the planet,” Martin said.

“Sumak kawsay” is an Ecuadorian concept written into the country’s constitution that means to live in harmony with nature.

In 2005, the environmental ministry of Ecuador ruled that oil drilling in the park would only be allowed if no roads were built. However, in May 2014, a group of scientists argued that Petroamazonas, a huge oil firm in Ecuador, built a road into the park, violating an environmental impact study.

“[Ecuador’s] Environment Ministry needs to demand from Petroamazonas an explanation of how [and] why they just blatantly violated the terms of the Environmental Impact Study and license,” co-author of the report, Matt Finer with the Amazon Conservation Association, told mongabay.com in an earlier interview.

2012: Roads were observed within Block 31, allegedly developed by Petroamazonas.

February 2013: President Rafael Correa was re-elected for a third term with more than 57 percent of the vote. At this point, Ecuador’s government had raised $330 million towards the Yasuni-ITT Initiative (with $13 million deposited).

August 2013: Correa ceased the Yasuni-ITT Initiative and began opening up the park to oil extraction. He declared on television that the Initiative would not have been successful, as only a relatively small portion of the needed funds had been raised. “I signed the act for the decease of the trustee found Yasuni-ITT, putting an end to the protectionist Initiative,” he said, defining his decision as “one of the hardest anybody can take.”

September 2013: The international community sent petitions and letters to the Ecuadorian Ambassadors in many countries to oppose the cancellation of the Yasuni-ITT Initiative.

June 2014: Approval to drill was granted by the Ecuadorian government after an attempt by activists to trigger a national referendum on the issue was thrown out by Ecuador’s National Electoral Council. Large-scale drilling is scheduled to begin in 2016.

July 2014: According to the Guardian, documents surfaced revealing Ecuador’s government was moving to install a power plant to exploit Yasuni’s oil fields while it was purportedly pursuing the Yasuni-ITT Initiative.