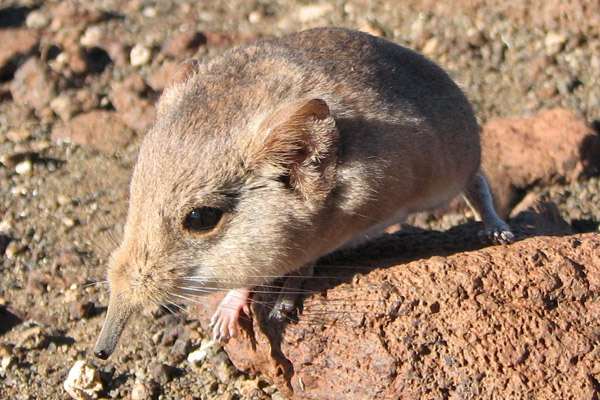 Forget marsupials, the world’s strangest group of mammals are actually those in the Afrotheria order. This superorder of mammals contains a motley crew that at first glance seems to have nothing in common: from the biggest land animals on the planet—elephant—to tiny, rodent sized mammals such as tenrecs, hyraxes, golden moles, and sengis. But there’s more: the group even includes marine mammals, such as dugongs and manatees. Finally, they also include as a member the most evolutionary-distinct mammal on the planet: the aardvark. While these species may seem entirely unrelated—and many were long shuffled into other groups—decades of genetic and morphological research now point to them all springing from the same tree. Last week, though, scientists announced the newest, and arguably cutest, member of Atrotheria: the Etendeka round-eared sengi.

Described in the most recent edition of the Journal of Mammology, the Etendeka round-eared sengi (Macroscelides micus) was discovered in the northwest corner of Namibia.

“It…might seem remarkable that Macroscelides micus escaped detection for more than 100 years since the first sengis were being described, but it occurs in a small and remote arid area that is difficult to access and has only recently been explored by small-mammal biologists,” the authors of the paper write.

It is distinguished from other sengis first by its size: the new species is the smallest sengi yet recorded. Only 19 centimeters long (7.5 inches), the new mammal weighs just 28 grams (0.9 ounces), or less than a dozen U.S. pennies. Moreover, the species is distinct for a hairless gland under its tail, pink-hued skin (as opposed to dark skin), and a rusty-colored fur which helps it blend into the reddish soil of the dry Etendeka Plateau. 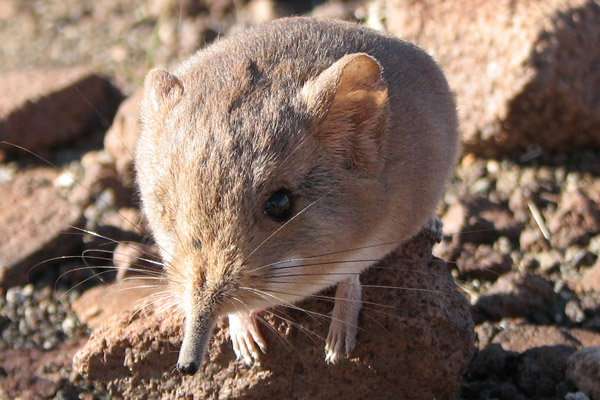 “Genetically, Macroscelides micus is very different from other members of the genus and it’s exciting to think that there are still areas of the world where even the mammal fauna is unknown and waiting to be explored,” said co-author John Dumbacher, the Curator of Ornithology and Mammalogy at the California Academy of Science.

Sengis, of which there are currently 19 known species, are also called as elephant shrews due to the fact that they sport small trunks. Ironically, they were given this name prior to the discovery that are actually related to elephants, not shrews.

Scientists first noticed the Etendeka round-eared sengi in a collection at the California Academy of Sciences; the specimen had been identified with a close relative found in the same region, the Namib round-eared sengi (Macroscelides flavicaudatus. But further morphological (physical) research and genetic studies proved that this was something different. From 2005-2011, researchers collected 16 specimens of the new species in the wild to compare them with already-described sengis.

“Had our colleagues not collected those first invaluable specimens, we would never have realized that this was in fact a new species, since the differences between this and all other known species are very subtle,” said Dumbacher. “Several museum collections were instrumental in determining that what we had was truly new to science, highlighting the value of collections for this type of work.”

There has been a recent debate over the scientific practice of collecting voucher specimens, i.e. killing individuals in order to study them thoroughly in a lab in addition to storing a preserved specimen for easy access later. Some have argued that given new technologies, such as genetic testing and digital photography, there is little need for collecting specimens. But many other biologists say scientific collections of even rare and endangered species play a vital role not just for studying animals, but in conservation efforts as well. 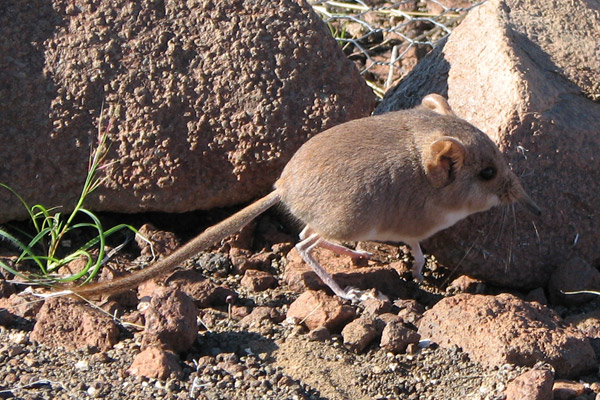 At this point, the scientists are uncertain if the new sengi is threatened with extinction, though they note it is possible.

“Because of the species’ low density and restricted range, there may be some conservation concern. Direct human impacts are relatively rare within the range and are limited to low-impact game hunting and viewing by tourists,” they write.

Currently three of the 19 sengi species are listed as threatened by the IUCN Red List. The majority of the species in this family are either Least Concern or Data Deficient. Most of these species were discovered in the 19th Century, but there has been a resurgence of new sengi species recently. In 2008, researchers discovered the world’s biggest sengi in Tanzania (the grey-faced sengi) and a cryptic species in South Africa (the Karoo rock sengi).

“With only about a dozen new species of mammal discovered in the wild each year, it is amazing that the [California Academy of Sciences] has been involved in describing three new sengis in the last decade,” said Galen Rathbun, a sengi-expert and a Fellow and Research Associate at the California Academy of Science. “There are new and exciting insights into biodiversity awaiting discovery, even in a group as familiar as mammals.”

New species has its anus behind its head

(06/09/2014) In the dark caves of southern Indiana in the United States, scientists have discovered a new species of cavefish that are blind, pinkish, and have their anus behind their heads. This peculiar new cavefish is the first to be described in North America in 40 years, and researchers have named it Amblyopsis hoosieri or Hoosier cavefish.

(06/03/2014) A team of Dutch and Malaysian scientists has recently completed one part of a taxonomic revision of Plectostoma, a genus of tiny land snails in Southeast Asia. Unfortunately, according to their article published recently in ZooKeys, it seems that these animals may be going extinct as fast as they are being discovered.

(05/23/2014) Researchers have discovered a colorful lizard species in the cloud forests of northwestern Ecuador.