Lab-grown meat: a taste of the future?

Many problems surround growing animals for meat. Most of the deforestation of the Amazon is done to create pasture for cattle; the meat industry is also responsible for significant greenhouse gas emissions, amounting to five percent of the world’s total atmospheric carbon load and nearly 40 percent of its methane. Ethically, conventional meat is fraught with dispute, as animals must first be killed for their tissue. Numerous animal rights organizations also protest the conditions in which many animals are raised, such as factory farms in which thousands of animals spend their lives packed together.

A new analysis published in Trends in Biotechnology describes one solution to the environmental and ethical problems of conventional meat production: growing meat without growing the animal. The authors write that cultured meat could someday replace conventional meat – if its price is brought down and its quality is improved.

Also referred to as in vitro meat, test-tube meat, or “shmeat,” cultured meat is made using muscle stem cells collected from living animals. The cells are immersed in a nutrient bath, where they multiply and eventually form strips of tissue that can be processed into a product that has a consistency similar to canned meat or finely ground hamburger. 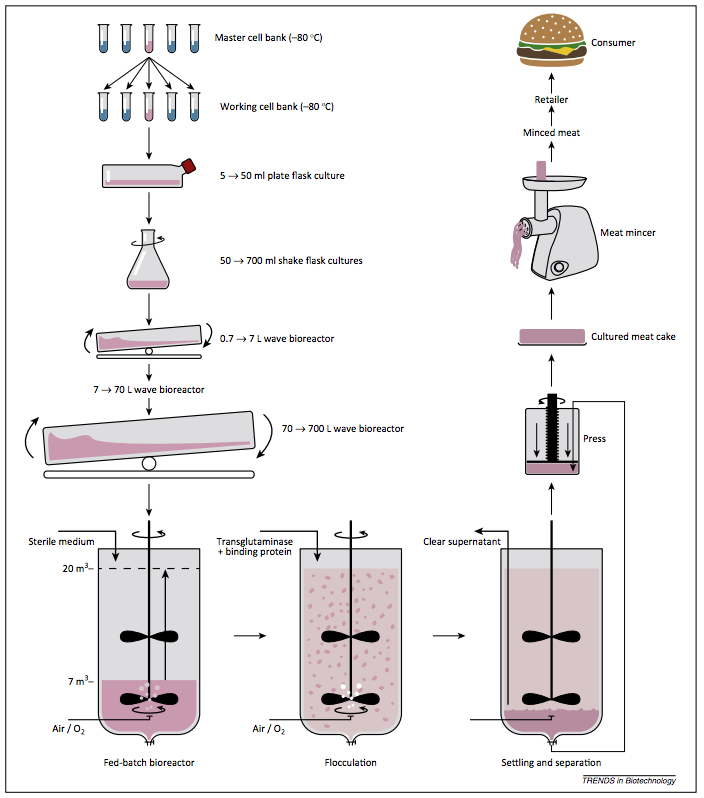 A recipe for cultured meat. The left column shows the stepwise increase in cell-culture volume, starting with a vial from the working cell bank (note that a new working cell bank is made from a vial from the master cell bank). Exponentially growing cells from each step serve, after growing to a certain cell density, as the inoculum of the next culture vessel, which is an order of magnitude larger. The final bioreactor starts only partially filled and is fed with sterile medium at such a rate that the cells grow further under optimal conditions. When the bioreactor is full and the desired cell density is reached, the protein-crosslinking enzyme transglutaminase and binding protein are added to induce the formation of easily settling aggregates of cells, which quickly settle when stirring is stopped (bottom right). The harvested cells are pressed and the cake is extruded into retailer- and/or consumer-size portions of minced meat (right column). Courtesy of Trends in Biotechnology, van der Weele et al. Click to enlarge.

Still in its infancy, the concept of lab-grown meat may still seem more like science fiction than something you may someday find in the grocery store. But while it undoubtedly elicits disgust in some, the article’s authors found that many people are intrigued by the idea.

“Most people initially find the idea of cultured meat surprising,” write the study’s authors, Cor van der Weele and Johannes Tramper of Wageningen University in the Netherlands. “First (Dutch) responses vary from ‘wow’ (from the majority; mostly because of the prospects for animals) to ‘yuck’ (from a minority; prominent associations are genetic modification and hot dogs).

The authors write that many people see cultured meat as too artificial, but that such a mindset could be overcome through small-scale production.

“A cultured meat scenario that generated not ambivalence but great enthusiasm among workshop participants was one in which pigs in backyards or on animal-friendly (urban) farms would serve as the living donors of muscle stem cells through biopsies,” the study states. “These pigs would live happy lives as companion animals while their cells are cultured in local meat factories.”

However, the authors believe that technological advances will soon improve the quality of cultured meat, with even “3D-printing as a promising technique getting much attention already,” van der Weele and Tramper told mongabay.com. “In order to improve protein content and meat quality, development of cells into muscle fibers is also needed.”

Cultured meat is not exactly a new concept. Starting more than 30 years ago, various organizations have investigated growing meat artificially, initially made possible through medical advancements in tissue culturing for transplants. Progress ramped up in the early aughts, with NASA replicating tissue using turkey cells in 2001. In 2002, NSR/Touro Applied BioScience Research Consortium managed to grow a fish fillet-like substance from goldfish cells. In 2003, a joint medical-art initiative led by Harvard Medical School called “The Semi-Living Steak Project” grew frog tissue as an art installation in a museum in Nantes, France. The frogs from which the cells were originally harvested were also included as part of the exhibit, living in a tank next to their own meat. As a grand finale, the tissue was cooked and served as a Novelle Cuisine-style dinner to museum patrons, after which the frogs were released into a local botanical garden.

Economists and scientists expect conventionally grown meat to increase in price due to heightened demand from a growing world populace along with resource constraints such as dwindling water supplies. However, conventional meat is still, by far, the cheaper option. A single burger grown in a lab over three months in 2013 and described by someone who tasted it as “close to meat…not that juicy, but the consistency is perfect,” cost $330,000 to make – more than 70,000 times the price of a Big Mac in the U.S.

However, the report’s authors believe that as conventional meat prices rise and as technological advances lower the cost of growing tissue in a lab, there may come a time when the latter may become a feasible option.

“The demand for meat is increasing, while the pressure to reduce the negative environmental impact of meat production strongly increases as well; the latter and increasing scarcity of meat will drive up the price of it. More research on cultured meat production will certainly lower its price and we think that it is matter of time that cultured meat will be become competitive,” van der Weele and Tramper told mongabay.com.