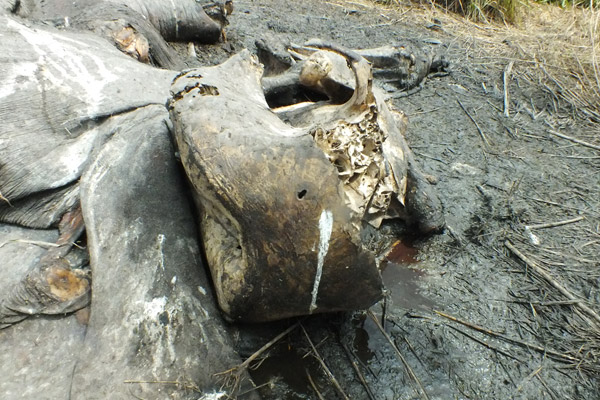 Poached elephant skull shows bullet hole from above, likely from a helicopter. The elephant’s face was cut off by a chainsaw to remove the tusks. In addition, its brain was taken. Photo by: African Parks.

Over the last two months, poachers have killed 68 African elephants in Garamba National Park representing around four percent of the protected area’s total elephant population, reports African Parks and the ICCN (The Congolese Institute for Nature Conservation). Poachers have used helicopters, grenades, and chainsaws to undertake their gruesome trade, and, for the first time, the park has recorded that the criminals are removing the elephant’s brains in addition to tusks and genitals.

“The situation is extremely serious,” said Garamba park manager Jean-Marc Froment. “The Park is under attack on all fronts.”

Located in the northeast corner of the Democratic Republic of the Congo (DRC), Garamba National Park has faced unscrupulous elephant poaching for years. In 2012, 22 elephants were killed on the same day in the park.

The poaching epidemic is also fueling terrorism and insecurity in the region. According to investigations by African Parks, much of the poaching is being conducted by the Lord’s Resistance Army (LRA). Run by Joseph Kony, this quasi-religious group has been linked to child sex slavery, child soldiers, rapes, murders, and mutilation. Experts say the group is now killing elephants en masse to fund its activities.

LRA members are entering the park from the west through an adjoining hunting zone, known as Azande Domaine de Chasse. Worryingly, the LRA poachers now appear to be equipped with new, high-tech weapons.

But the LRA aren’t the only poachers operating in the vast park, which covers 4,920 square kilometers or about half the size of Cyprus. Poachers are also coming from South Sudan, which is in the midst of a civil war. Some of these poachers are said to be in military uniform.

Poachers have also been linked to the DRC army, a.k.a. the Congolese Armed Forces (FARDC); these are believed to be soldiers who have deserted their post.

In the past two months, nine elephants have also shown signs of being shot down with military-precision from helicopter. However, the park is uncertain who is responsible for these airborne attacks.

Elephants are the only victims of the trade. In the last two months alone, five poachers have been killed in firefights with rangers. Wildlife rangers are also often killed in these battles. During one recent fight, South Sudan poachers threw grenades against rangers.

“Garamba contains the largest remaining elephant population across this entire region of Africa and has therefore become a major poaching target,” said, Peter Fearnhead, the CEO of African Parks, an NGO that helps manage troubled parks on the continent. “We do not underestimate the danger facing our rangers on the ground, but we are also determined to take whatever measure we need to protect our elephants.”

Toward that end, African Parks and the ICCN, the co-managers of Garamba, are announcing a number of new initiatives including collaborating with regional military, building new roads and infrastructure, bullet-proofing trucks and planes used by the park’s rangers, and improving communications throughout the park. Garamba is also “urgently” seeking a helicopter to allow rangers to move more quickly, according to a press release. 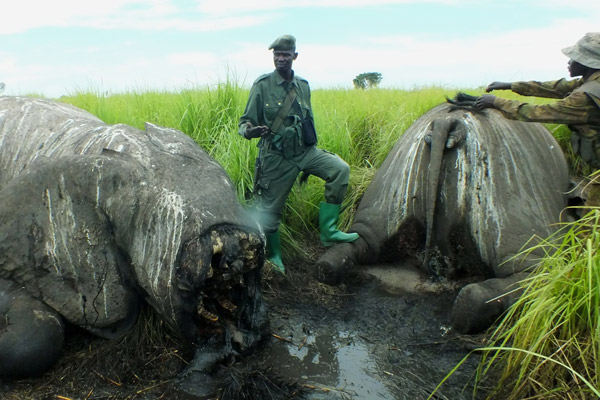 Elephants gunned down by helicopter. Photo by: African Parks.

Today, less than 2,000 elephants survive in Garamba National Park. This is a 90 percent decline from 50 years ago when some 20,000 elephants roamed the park. Interestingly, the elephants in Garamba are believed to be a hybrid of savannah and forest elephants, which a 2011 genetic study found were unquestionably separate species.

Elephants are being killed across Africa for their tusks at hugely unsustainable rates. In recent years, estimates of the numbers of elephants killed annually have ranged from 22,000-35,000. A new report by the Secretariat of the Convention on International Trade in Endangered Species (CITES) estimates that at least 20,000 elephants were slaughtered for their tusks last year. While this number is a slight decline from 2012—when 22,000 elephants were killed—poaching is still outpacing elephant births on the continent.

Garamba National Park is also famous as the last stand of the northern white rhinoceros (Ceratotherium simum cottoni) in the wild. No rhinos have been seen in the park since 2006, which has led experts to believe that poachers have wiped them out.

Today, only five northern white rhinos are believed to survive in all: four in Kenya (in semi-captive conditions) and one in a zoo in the U.S. Although long considered a subspecies, recent research argues that the northern white rhino may in fact be a distinct species in its own right, which would make its near-inevitable extinction all the more tragic. 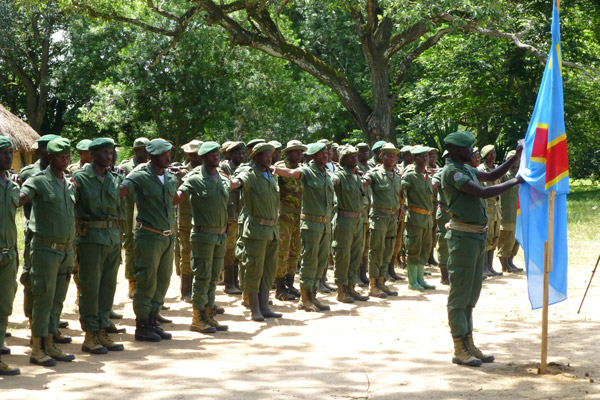 Park rangers on parade at the launch of more intensive anti-poaching methods in Garamba. Photo by: African Parks.

(05/17/2014) Hong Kong has begun destroying its 29.6-metric-ton stockpile of confiscated ivory. On Thursday authorities in the semi-autonomous Chinese city crushed and incinerated a ton of seized ivory in an action they hope will send a message to poachers and traffickers.

(05/12/2014) Actor Leonardo DiCaprio has stepped up with a $1 million donation to the Elephant Crisis Fund, an initiative that aims to stop the ivory poaching crisis.