Deforestation reduces the size of fish Tropical peacock bass. The new study looked at fish in the boreal forest but the results may apply to the tropics as well.

The research looked at fish biomass in a Canadian lake where sections of forest had been lost due to acid rain. It found that fish in areas near forest were “fatter” than fish in denuded zones.

“We found fish that had almost 70% of their biomass made from carbon that came from trees and leaves instead of aquatic food chain sources,” said Andrew Tanentzap from the University of Cambridge’s Department of Plant Sciences in a statement. “While plankton raised on algal carbon is more nutritious, organic carbon from trees washed into lakes is a hugely important food source for freshwater fish, bolstering their diet to ensure good size and strength.” 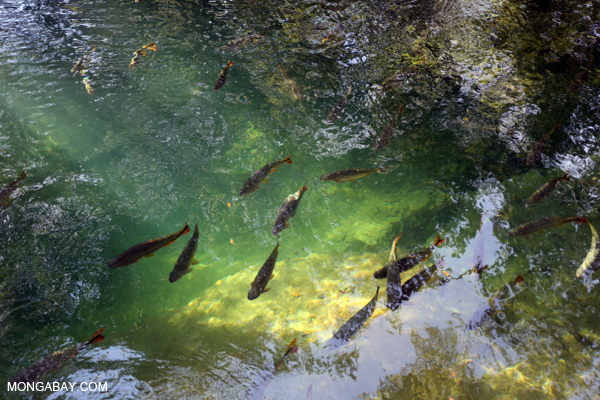 The findings showcase the importance of boreal forests in lake ecology. The authors add that the results may well apply in other ecosystems, providing evidence of another benefit afforded by forests.

“It’s estimated that freshwater fishes make up more than 6% of the world’s annual animal protein supplies for humans – and the major and often only source of animal protein for low income families across Bangladesh, Indonesia and the Philippines,” said Tanentzap.

“While we’ve only studied boreal regions, these results are likely to bear out globally. Forest loss is damaging aquatic food chains of which many humans are a part.”