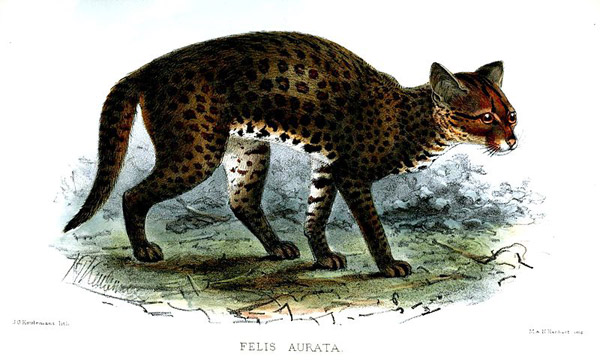 One of the world’s least known wild cats may have taken on more than it could handle in a recent video released by the Gashaka Biodiversity Project from Nigeria’s biggest national park, Gashaka Gumti. The video, taken by remote camera trap, shows an African golden cat (Profelis aurata) attempting to catch a tree pangolin (Manis tricuspis), a strange mammal covered in armored scales. The Gashaka Biodiversity Project is coordinated by Chester Zoo in the UK as a part of its Act for Wildlife conservation program.

“For every image of wildlife captured [on camera trap] there will probably be several more of nothing, branches blowing in the wind, or maybe a glimpse of the back-end of an animal moving out of range! It is therefore always exciting when you actually get a good bit of video of an animal, and doubly so when they are exhibiting exciting behaviour as we see here,” Scott Wilson, Head of Field Conservation and Research at Chester Zoo, told mongaaby.com.

The video is especially important because it gives scientists a glimpse into what the IUCN Red List dubs “Africa’s most poorly known cat.”

“This footage confirms that the golden cat is found in that area, gives us information on their size, color patterns etc and also gives us an insight into hunting behaviour, and a strong clue that pangolin are part of its prey,” said Wilson. “Snippets of information like this all go towards reinforcing what is known about this species.”

Found in Central and West Africa, the African golden cat has only been the target of in-depth research very recently. In fact, the first videos of the cat in the wild were only released in 2011, one of which showed a cat chasing a bat (see below). The African golden cat is currently categorized as Near Threatened by the IUCN Red List; they are primarily threatened by deforestation across the region as well as bushmeat hunting which may be depleting their prey base. Speaking of African golden cat prey, Wilson says that they are unsure of the fate of the pangolin in the video.

“The camera traps have a lapse before they are triggered and take the next footage. In next video in the series the golden cat has gone and the pangolin is starting to move its legs. In the next video the pangolin has also gone—we don’t know whether it left by itself or was ‘helped.'”

There are four species of pangolins in Africa and four in Asia. The Asian species are under tremendous pressure due to poaching for their flesh, scales, and even fetuses. Some conservationists worry that as pangolins are wiped out across Asia, poachers could soon turn to African species.

The video also highlights the importance of Gashaka Gumti National Park, which is larger than the state of Delaware and hugely biodiverse.

“This park is one of West Africa’s last wildernesses—it is nearly 7,000 square kilometers, a critically important regional watershed and its mosaic of habitats and dense forests are home to a huge array of wildlife. It is also probably the site for the only remaining viable population of the Nigeria-Cameroon subspecies of chimpanzee,” said Wilson.

The Gashaka Biodiversity Project works with local communities, the national park staff, and researchers in order to better protect the park, which is home to over 100 species of mammal and over 500 species of bird.

A playful African golden cat hunting a bat at night.

Forgotten species: the nearly extinct primate that can be shot on sight

(09/27/2013) The attention paid to charismatic popular primates—such as gorillas, chimps, orangutans, lion tamarins, and even some lemurs—could make one suppose that conservationists have the protection of our closest relatives well in hand; the astounding fact that no primate species is known to have gone extinct in the last hundred years (despite large-scale destruction of their habitats) seems to confirm this statement. However, looking more closely at the data, one finds that not only are many of the world’s primates slipping toward extinction, but a number of them have received little conservation attention. According to the IUCN Red List, a staggering 48 percent of the world’s primates are threatened with extinction: that’s a worse percentage than amphibians which have been ravaged by a global epidemic. And although a handful of the world’s 600-plus primates have garnered conservation adoration, many remain obscure.

(07/26/2013) The world’s highest deforestation rate, the execution of eight environmental activists including a Nobel Peace Prize nominee, and ongoing turmoil surrounding oil operations in the Niger River Delta has created a notoriously disreputable environmental record for the West African country. Now, a new threat is rising in the already-compromised forests of Nigeria: illegal marijuana cultivation.

Saving (and studying) one of Nigeria’s last montane forests

(07/26/2011) Between 2000 and 2010, Nigeria lost nearly a third (31 percent) of its forest cover, while its primary forests suffered even worse: in just five years (2000 to 2005) over half of the nation’s primary forests were destroyed, the highest rate in the world during that time. Yet, Nigeria’s dwindling forests have never received the same attention as many other country’s, such as Indonesia, Brazil, Malaysia, or Peru, even though in many ways Nigeria struggles with even deeper problems than other developing nations. Despite vast oil business, the nation is plagued by poverty and destitution, a prime example of what economists call the ‘resource curse’. Environmentally, it has been named one of the worst in the world. Yet, not all forest news out of Nigeria is bleak: the success of the Nigerian Montane Forest Project in one of the country’s remaining forests is one such beacon of hope, and one example of how the country could move forward.

(06/27/2011) A new conservation plan calls for $14.6 million to save the world’s rarest subspecies of chimp: the Nigeria-Cameroon chimpanzee, reports the Wildlife Conservation Scoeity (WCS).

How do we save Africa’s forests?

(06/19/2011) Africa’s forests are fast diminishing to the detriment of climate, biodiversity, and millions of people of dependent on forest resources for their well-being. But is the full conservation of Africa’s forests necessary to mitigate global climate change and ensure environmental stability in Africa? A new report by The Forest Philanthropy Action Network (FPAN), a non-profit that provides research-based advice on funding forest conservation, argues that only the full conservation of African forests will successfully protect carbon stocks in Africa.