New research shows most Americans place importance on the protection of the ailing monarch butterfly, which is experiencing a steep decline in numbers. The study, published in Conservation Letters, found nearly three-quarters of those surveyed support conservation efforts for the iconic species, and are willing to spend several billion dollars to help.

The monarch is the official insect or butterfly of seven U.S. states, and is celebrated in a number of festivals held across North America. The annual migration of monarch butterflies (Danaus plexippus) is one of nature’s most beautiful sights. Millions of the insects migrate annually from the as far north as Nova Scotia all the way down to wintering grounds in the forests of Mexico, a journey of up to 3,000 miles (4,800 kilometers) that takes four generations.

However, each year fewer and fewer monarch butterflies make the trip, as populations have been declining across North America for about 15 years. Recent surveys at the wintering grounds of monarchs in Mexico showed the lowest colony size ever recorded. 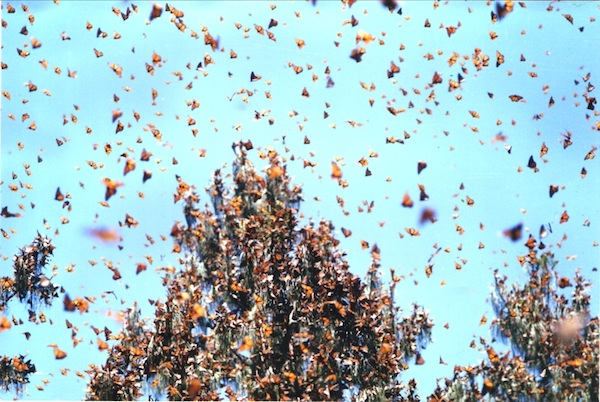 A wintering mass of monarchs. Photo by: Raina Kumra.

To estimate population size, researchers measured monarch numbers while they were assembled en mass at their wintering grounds. During the 2013-2014 winter season, the butterflies covered 0.67 hectares in Mexico’s forests, a drop of 44 percent from 2012. Overall, the average monarch coverage from 1994-2014 was 6.39 hectares – nearly ten times higher than the 2013 estimation.

Much of the decline in monarch numbers has been blamed on the loss of milkweed, the native plants on which monarch caterpillars feed. Karen Oberhauser, a monarch biologist from the University of Minnesota and co-author of the study, said breeding, migrating and overwintering habitat loss are the main factors affecting monarch populations.

“In the U.S., the growing use of genetically-modified, herbicide-tolerant crops, such as corn and soybeans, has resulted in a severe decline in milkweed, and thus a loss of breeding habitat,” Oberhauser said.

The findings of the study showed more than half of the American respondents were “not aware” of the declines in monarch populations, while 39 percent were familiar with the issue. Seventy percent of those questioned believed conserving monarchs was important, while three percent said it was not important.

According to Jay Diffendorfer, a USGS scientist and the study’s lead author, while the multigenerational migration of the monarch butterfly is considered one of the world’s most spectacular events, protection of the species is challenging.

Monarch butterflies produce four generations every year. Most live only a few weeks, but the fourth generation lives several months in order to complete their journey. Photo by: Kenneth Dwain Harrelson.

“Managing migratory species is difficult because they can cross international borders and depend on many geographic areas for survival,” he said. “However, the life cycle of monarchs creates opportunities for untapped market-based conservation approaches.

The researchers received heartening responses to the survey. In total, their study indicates that the U.S. public is willing to spend between $4.78 billion and $6.64 billion to help protect the monarch butterfly.

“The study shows that not only might consumers pay more for monarch-friendly milkweeds grown without systemic insecticides in the potting soil, but also that consumers might be more interested overall in buying nectar-producing plants or milkweeds if they knew a small percentage of sales will be donated to habitat conservation,” Diffendorfer said. 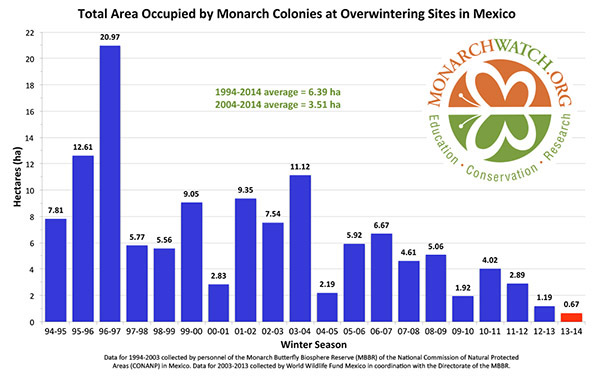 Monarchs have declined precipitously over the past 20 years. Photo courtesy of Monarch Watch.