Sea levels are rising at the highest rate in thousands of years, putting at risk low-lying islands around the world. In a new study published in Nature Conservation, researchers found that projected rises in sea level stand to swamp more than 10,000 islands, displacing human communities and wiping many unique species off the face of the earth.

Climate change is leading to rising oceans in a two-fold way. First, increasing temperatures at the poles are melting ice-sheets, discharging more and more water into the sea every year. Second, while climate change is causing cooling in some areas of the world, the overall temperature of the ocean is increasing; as the water heats up, its molecules need more space and it expands in volume. These effects are contributing to sea-level rises of around three millimeters every year, with studies projecting an overall 0.5 to 2.3-meter increase by the end of this century.

The importance of predicting what might happen when sea levels rise serves several purposes, such as helping scientists and policy makers design and implement proactive strategies to curb impacts.

“Sea-level rise is one of the most certain consequences of global warming, yet it remains the least studied,” the study states. “Potential effects of sea-level rise are of considerable interest because of its potential impact on biodiversity and society.” 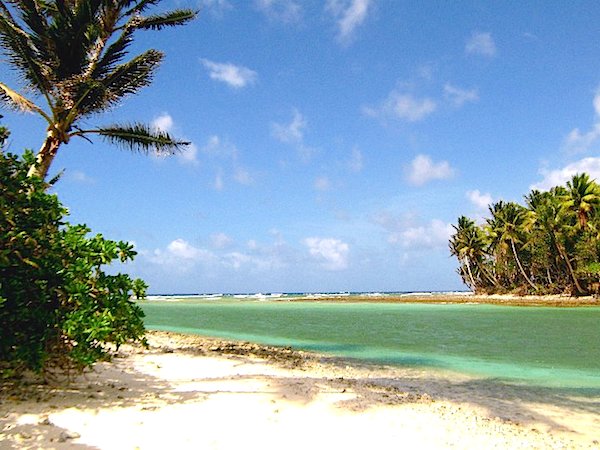 The Republic of the Marshall Islands is made up of numerous small islands in the western Pacific. At only two meters above sea level, much the nation of about 63,000 people stands to be submerged by rising sea levels. Photo by: Morgan Erickson-Davis.

The study focuses on two specific impacts: the extent to which sea-level rise would result in complete island submersion, and the impacts such rises may have on threatened plant species unique to particular islands. The researchers used the International Union for Conservation of Nature (IUCN) database to identify plant species most at risk of becoming extinct.

The researchers looked at islands within French territories, four of which are classified as biodiversity hotspots. Biodiversity hotspots are places around the world with significant numbers of unique species that are threatened by human activities.

The team used computer modeling to test different scenarios, and found that significant losses of biodiversity may occur as sea levels rise. For instance, an increase of one meter resulted in the complete submersion of 63 islands, whereas a three-meter rise pushed the number up to 145. The researchers also took into account regional variability of warming.

New Caledonia and the islands comprising French Polynesia had the highest impact levels in both scenarios. Mediterranean and Caribbean islands, and those near Madagascar and Guyana, were also significantly affected.

“For all projections considered, the regions with the most important number of islands potentially threatened were New Caledonia ([with more than]30 percent of the total islands entirely submerged were in New Caledonia), French Polynesia ([with more than] 30 percent), and the Mediterranean (10 percent), although many islands will also be submerged in other regions such as Caribbean, Madagascar, and Guyana,” the study explains.

The team calculated the extent of plant species lost exclusively in New Caledonia using the IUCN database for each of the 64 plants found in the region. They found plants already classified as at-risk of extinction by the IUCN were the most threatened by habitat loss due to rising sea levels.

“Because our results showed that New Caledonia is particularly sensitive to sea-level rise, we decided to study the potential losses in the region,” the article states. In order to do this, the researchers calculated areas that would be partially submerged as opposed to completely submerged. With this data the team was able to determine “the vast majority of endemic plant species vulnerable to an increase of sea level are already at a high risk of extinction. Consequently, species that already are at a higher risk of extinction will lose the largest habitat as a result of sea rise.” 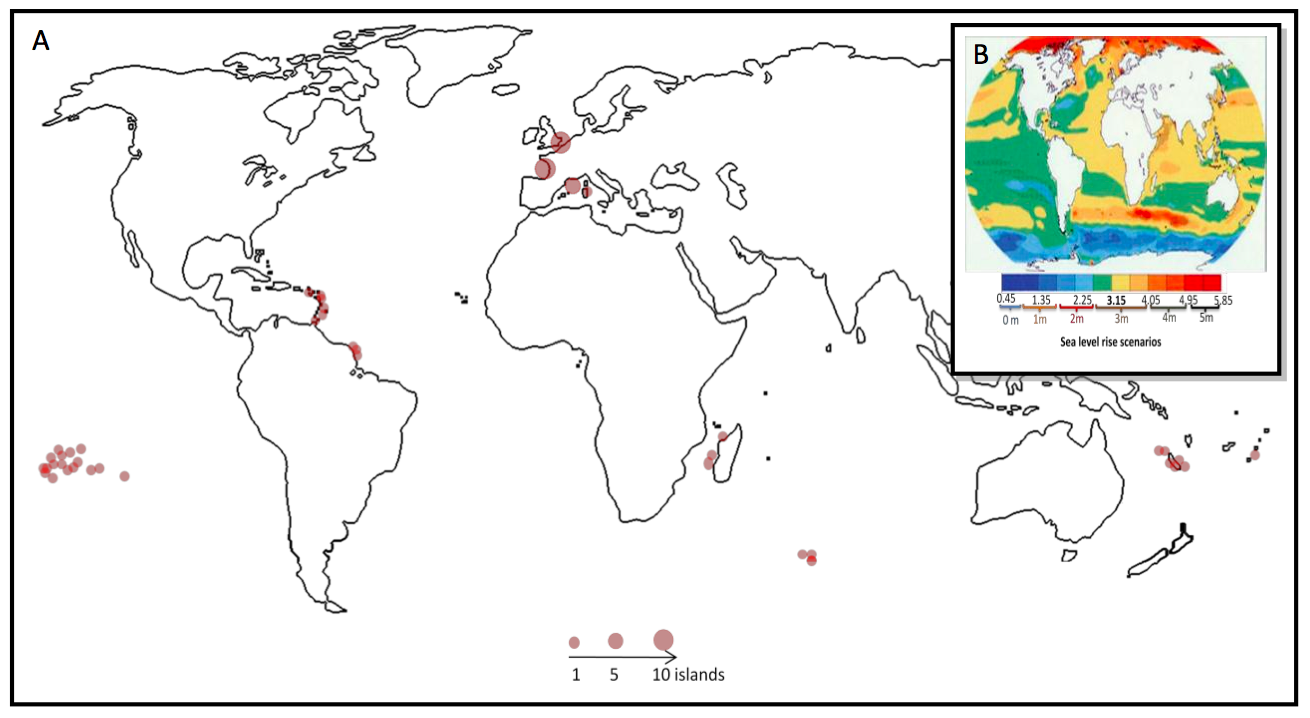 The areas in pink (A) indicate the location and number of islands that would be submerged given a three-meter increase in sea level. The inset image (B) describes the regional variation in sea level change, with red representing the highest increases. Courtesy of Bellard et al. Click to enlarge.

The researchers extrapolated the results from their study sample of hundreds of French islands to the 180,000 islands worldwide. Their results indicate that approximately 10,800 would be submerged by a one-meter increase in sea level.

Human communities will also need to adjust to rising seas. The study projects that by 2030, 50 percent of all people worldwide will live within 100 kilometers (60 miles) of a coastline – up from the current estimate of approximately 23 percent. As sea levels rise, agricultural zones within coastal, flood-prone areas will need to be relocated, and even inland communities will be impacted.

“Coastal population and asset exposure are growing faster than the national average trends, which means that the impact on society will be more significant in the future,” Céline Bellard, lead researcher of the study, told mongabay.com. “Even populations that are not ocean-dwelling or directly dependent on the coast, they will likely be impacted by indirect events like soil erosion or crop floods.”

The authors advise that the most at-risk islands such as New Caledonia and French Polynesia need to be identified and prioritized by conservation planners so that they can most effectively prepare for the projected 0.5 to 2.3-meter increases in sea level.

“In order to anticipate threats and prepare adequate conservation actions (e.g., local protection, identification of refuges or translocation programs), conservation managers have to target specific islands that have high risk of being permanently inundated within the next decades,” Bellard said.

“Considering their important contribution to global biodiversity and the threat of sea level rise for future biodiversity of some of these islands, there is an urgent need that islands feature prominently in global and regional conservation prioritization schemes.”