The Congo, the world’s second largest rainforest, is losing its greenness, finds a new study published in Nature.

The research, based on analysis of NASA satellite data, reveals the impact of long-term drought that has affected the region in 2000. The study may help scientists forecast the Congo rainforest’s future outlook.

“It’s important to understand these changes because most climate models predict tropical forests may be under stress due to increasing severe water shortages in a warmer and drier 21st century climate,” lead author Liming Zhou of the SUNY’s University at Albany said in a statement.

Zhou and colleagues found strong evidence of long-term “browning” in the region, signaling a decline in water availability to plants consistent with the drought observed since the turn of the century. Surface temperatures in the region also increased, further stressing forests.

“Forests of the Congo basin are known to be resilient to moderate climate change because they have been exposed to dry conditions in the past few hundred years,” said study co-author Sassan Saatchi of NASA’s Jet Propulsion Laboratory. “However, the recent climate anomalies as a result of climate change and warming of the Atlantic Ocean have created severe droughts in the tropics, causing major impacts on forests.” 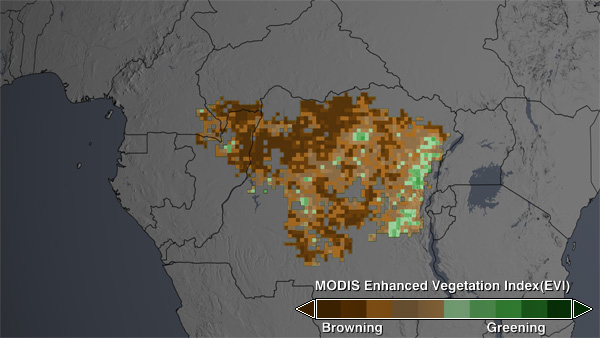 Spatial patterns of changes in April–May–June vegetation greenness for the period 2000–2012. The vegetation browning/greening trend is shown only during the three-month period of April–May–June over mostly the intact Congo rainforest (6°S–5°N, 14°E–31°E), not the entire African rainforest, as the satellite data are of the best quality during this period over the study region. 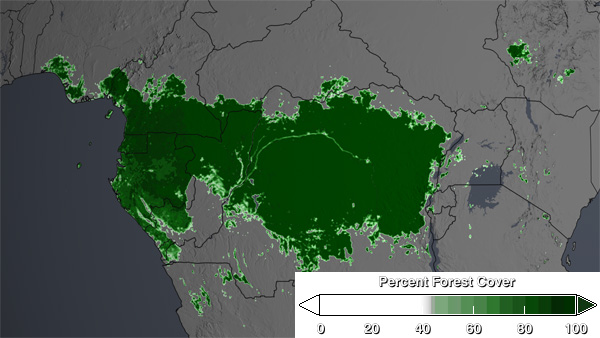 The climatology of percent forest cover over the African rainforest. Images and captions courtesy of NASA.

The changes in the Congo, where forests appear to be slowly responding to a long-term drying trend, contrast with the large-scale tree die-offs observed in the Amazon in response to sudden, severe droughts.

Researchers are still trying to understand the long-term implications of climate shifts on tropical forests. Some expect higher temperatures and increased drought to cause ecological transitions, like deciduous trees expanding at the expense of evergreen trees or savanna becoming more dominant.

“Our assessment is a step toward an improved understanding of how African rainforests respond to increasing drought,” Zhou said. “We need to consider the complex range of processes affecting different tropical rainforest species before we can fully assess the future resilience of tropical forests.”