Scientists from the German Leibniz Institute for Zoo and Wildlife Research, Berlin (IZW), undertook the study in Costa Rica, and focused on Sowell’s short-tailed bats (Carollia sowelli), a species found throughout Central America and Mexico. The findings of their study indicate that artificial lights may deter these bats from feeding on fruit and spreading seeds by 25 to 50 percent.

Daniel Lewanzik, a researcher at IZW, divided a cage into two compartments. One was naturally dark and the other was illuminated by a sodium street lamp – the most common form of street lamp in the world. The bats were offered the same fruits in each compartment: pepper plants, nightshade and figs. 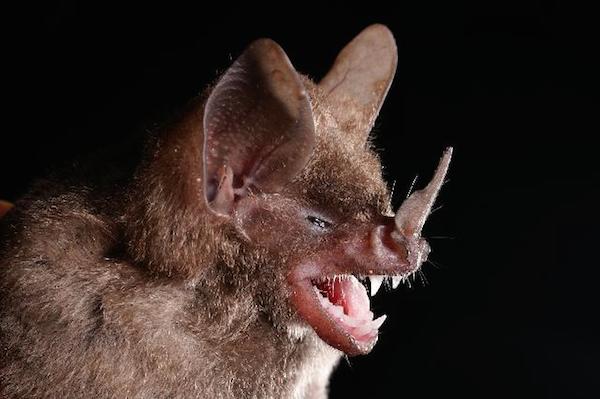 In a second experiment, Lewanzik illuminated pepper plants growing in the wild with a street lamp and measured the amount of fruit bats harvested from the plants compared with plants in dark areas.

Frugivorous vertebrates, or animals that feed on fruit such as Sowell’s short-tailed bat, are vital in the dispersal of seeds in tropical habitats. Scientists estimate that up to 90 percent of tropical trees and shrubs use vertebrates to disperse their seeds.

Lewanzik said that while many insect-eating bats are known to avoid foraging in light-polluted areas, this is the first study to show that fruit-eating bats also avoid artificially lit areas

The issue is not restricted to bats, with other animal species also affected by artificial light in their natural habitats.

“Light pollution affects many different nocturnal and diurnal animal species,” Lewanzic said. “Artificial light at night has been shown to alter the activity rhythms of songbirds and primates, both of which are also important seed dispersers in tropical habitats. However, we focused our study on frugivorous bats because they are among the most numerous seed dispersers in tropical habitats, and they also introduce seeds into open areas that are avoided by many other seed-dispersing animals.” 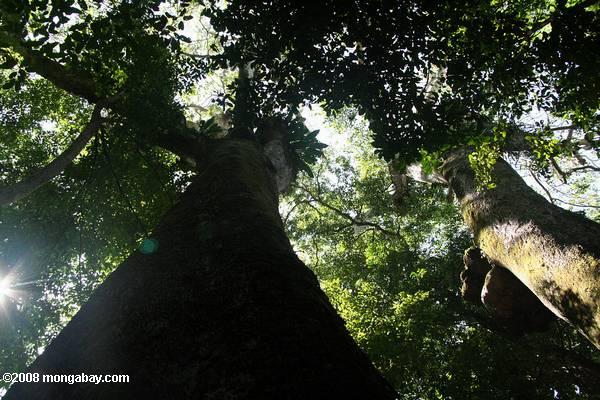 Costa Rican rainforest. Scientists estimate that the seeds of 90 percent of tropical trees and shrubs are spread by vertebrates. Photo by Rhett A. Butler.

“We could only investigate the effects of light on one species and do not feel confident to extrapolate to all frugivorous bats, but our results are probably highly relevant for tropical seed dispersal and forest regeneration,” he said.

The study suggests that the detrimental effects of light pollution are likely to increase with human development and may significantly impact biodiversity. This is particularly true in the tropics, where artificial light follows human encroachment in natural habitats at unprecedented rates.

“Particularly in the tropics, where nocturnal seed dispersers are crucial for ecosystem functioning, maintaining unlit habitats large enough to guarantee viable populations of light-sensitive species should be of high priority.”

(11/15/2013) A team of researchers has discovered a new species of bat in Brazil, which has put a previously known species, Bokermann’s nectar bat (Lonchophylla bokermanni), at risk of extinction. Long thought to comprise one species, the bat populations of the Atlantic Forest and the Cerrado – the tropical savannah of Brazil’s interior – are in fact distinct from one another, according to a new study in Zootaxa. Scientists now say the Atlantic Forest’s population represents a newly described species, which they have dubbed Peracchi’s nectar bat (Lonchophylla peracchii).

(11/11/2013) An international research team led by Daurina Koubinova has discovered five new species of vesper bats during a series of expeditions to Senegal’s Niokolo-Koba National Park. The new species are considered cryptic, because their genetic makeup is different despite physical similarities. The new bats have yet to be named.

(11/08/2013) A dolphin swimming through the world’s oceans after fish, and a bat flying through the air with its membranous wings to catch insects or eat fruit: at first glance, it looks like no two creatures could be more different. But it turns out they share a superpower – they hunt prey by emitting high-pitched sounds and listening for a returning echo. A recent study published in the journal Nature Letters has shown that the regions of the genome responsible for this ability are strikingly similar between these very different mammals.

(10/28/2013) One of the world’s least-known flying foxes could face extinction by rising seas and changing precipitation patterns due to global warming, according to a new study in Zookeys. The research, headed by Donald Buden with the College of Micronesia, is the first in-depth study of the resident bats of the remote Mortlock Islands, a part of the Federated States of Micronesia.