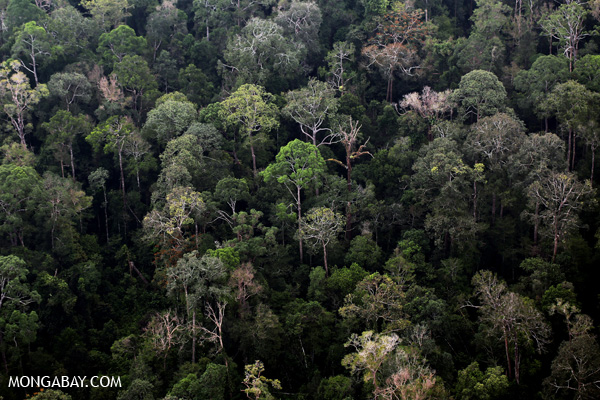 An area of rainforest APP has pledged to protect in Riau Province, on the island of Sumatra. Photo by Rhett A. Butler.

Asia Pulp & Paper (APP), Indonesia’s largest pulp and paper company and a long-time target of environmental campaigners, today committed to protect and restore a million hectares of forest across Indonesia. The pledge, which represents an area equivalent to the total plantation area from which the company sourced pulp in 2013, was immediately welcomed by WWF, which until today has remained one of APP’s staunchest critics.

“We remain cautious of these new developments but we are encouraged with the level of ambition, which is unprecedented,” Aditya (Dito) Bayunanda of WWF-Indonesia told Mongabay.com. “The intention of addressing the past legacy of deforestation of APP something that other former deforesters in the world has yet to attempt.”

APP’s restoration commitment — announced Monday in Jakarta — represents a major escalation of its forest conservation policy, which was established a year ago February. The zero deforestation policy includes safeguards that exclude timber sourced via conversion of peatlands and rainforests as well as protections for local communities, including embracing the concept of free, prior informed consent (FPIC) in new plantation development. APP is also investing heavily in stakeholder engagement, inviting supporters and critics alike to provide feedback and report breaches of its policy.

WWF’s tacit support of the restoration pledge reveals the extent of this engagement. It was only last month that WWF issued a brief to paper buyers warning them to wait to resume doing business with APP. While WWF isn’t yet recommending APP products, the conservation giant’s language has noticeably softened with the restoration announcement.

“We continue to advise buyers they must ensure implementation before making their buying decisions [and] they must also be aware that APP has commissioned Rainforest Alliance to conduct independent verification of their performance,” said Dito. “The restoration commitment is definitely something very encouraging, though the decision to buy should be based on implementation and not just commitments.” 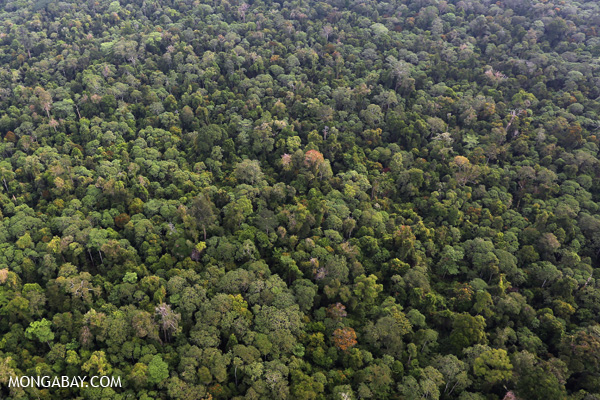 An area of rainforest APP has committed to protect near Riau’s Giam Siak Kecil Biosphere Reserve. Photo by Rhett A. Butler.

APP’s restoration commitment targets nine “landscapes” across Sumatra and Kalimantan, regions where the company sources its fiber. Notably APP says it will first focus on Bukit Tigapuluh or “30 Hills”, an area of forest that provides critical habitat for endangered tigers, elephants, and orangutans. Bukit Tigapuluh has been the source of much consternation in the conservation community, including a very public conflict between WWF and APP, which have competing proposals for management of land in the area. Under the new agreement, APP says it will work with “an NGO coalition” to preserve the area’s forests, including “increased protection of the corridor road from illegal activities, work on protecting the threatened elephant herd in the Tebo Multi Agro concession, and assessment of the viability of creating an animal corridor in the WKS concession which would connect important forest habitat blocks.”

APP also says it will observe the principles of FPIC in protecting and restoring forest areas, an important component given widespread conflicts over land in much of Indonesia.

“Land cannot be conserved or restored in isolation, the sustainability of the entire landscape must be taken into account and many stakeholders must be involved. We hope that by working with Indonesian and international stakeholders, as well as organizations such as WWF and Greenpeace, our efforts will be much more effective,” said Aida Greenbury, APP’s managing director of sustainability, in a statement.

“We believe that by assessing entire landscapes and creating clear tailor made objectives and strategies, the maximum possible level of conservation will be achieved, not just for natural forest in our concessions, but for areas around them as well.”

At this point, many details still need to be fleshed out, according to Greenbury.

“The details will be based on our HCV/HCS forest, social and peat assessments; on the available landscape studies by NGOs; on identification of stakeholders in the landscapes; and on the existing areas or corridors to support the core conservation landscape,” she told Mongabay.com. “This initiative focuses on supporting large landscape conservation areas, i.e. by protecting the forest against threats, restoring degraded areas, providing buffer zones or connecting corridors, etc. These conservation areas could be national parks, protected forests or existing concessions.” 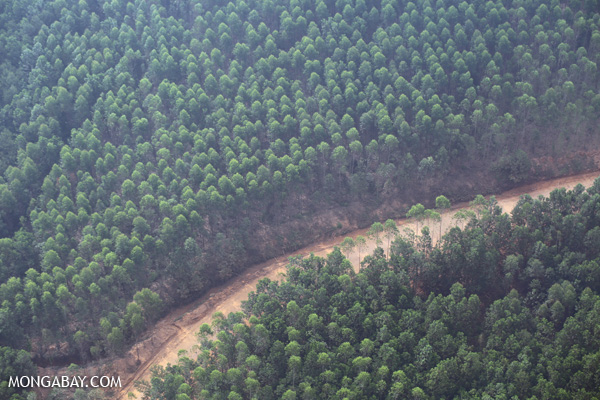 A concession owned by APP’s parent Sinar Mas Group in Riau. Photo by Rhett A. Butler.

To facilitate the conservation and restoration efforts, APP will provide seed funding for “an independently administered” trust fund.

“We will announce the details on how our funding platform will work in due course,” said Greenbury. “We have a structure agreed in principle – and that is to ensure that this is an arm’s length and completely transparent funding process.”

The approach has the potential to transform conservation efforts in Indonesia, which has a dismal track record with its existing system for managing protected areas. A study published in 2012 showed that Indonesia’s reserves are no more effective at maintaining forest cover than logging concessions. Broader stakeholder engagement, including stronger private sector support, could provide an element missing under previous approaches.

“It’s true that conservation in Indonesia is exceptionally challenging. But it is also true that, so far as I know, no-one has engaged as wide a range of stakeholders,” said Greenbury. “No single organization has yet managed to solve the problems driving deforestation and greater collaboration is clearly the key to success. That is what we hope to achieve here, by creating a new forest conservation model.”

But a new model will nonetheless have to overcome endemic issues like corruption, poor governance, and conflicting land titles. Sorting out these intractable problems however would yield dividends that extend well beyond APP and these landscapes. 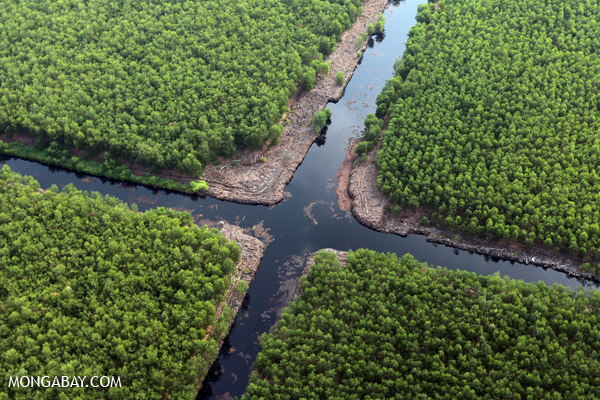 An APP supplier concession in Sumatra. Photo by Rhett A. Butler.

Today’s commitment from APP to protect forests, restore ecosystems, and work with a range of stakeholders adds to the surprising turnaround by the forestry giant, which until a year-and-a-half ago was viewed by many environmentalists as a pariah for its poor forest management. Long-running campaigns by Greenpeace, the Rainforest Action Network (RAN), WWF, Greenomics, and others hammered APP for its role in large-scale destruction of Sumatra’s rainforests and peatlands, including critical habitat for tigers and orangutans. APP drew further ire by reneging on two high profile agreements to halt deforestation.

By the late 2000’s the campaigns began to inflict heavy damage on APP, with dozens of major customers dropping it as a supplier and the Forest Stewardship Council (FSC), an eco-certification label, terminating its relationship with the company. With pressure mounting, in 2011 APP began working with The Forest Trust (TFT), an international NGO that helps companies transition to deforestation-free supply chains. That engagement set in motion the development of a forest policy that was sufficiently robust that Greenpeace, then APP’s biggest adversary, agreed to suspend its campaign against the company.

But through this year, many environmentalists remained skeptical of APP’s commitment. One of the chief issues was the damage APP and its suppliers had caused to Sumatra’s forests — more than a million hectares pulped for industrial acacia and eucalyptus plantations, releasing untold amounts of carbon into the atmosphere. That “deforestation legacy” kept WWF and others from embracing APP’s apparent shift toward greener practices.

Therefore today’s announcement is a very significant development in APP’s efforts to redeem itself in the eyes of green groups. It also puts pressure on APP’s biggest competitor, Asia Pacific Resources International Limited (APRIL), which intends to continue sourcing rainforest fiber through nearly the end of the decade.

“These actions will go a long way to help address APP’s deforestation legacy and set an important precedent for conservation in Indonesia and beyond,” said Zulfahmi, Forest Campaigner at Greenpeace Southeast Asia. “APP’s approach contrasts strongly with Indonesia’s other major pulp and paper producer APRIL/RGE. In a sustainability announcement earlier this year APRIL admitted it will continue to rely on rainforest clearance for at least another six years. It’s time APRIL and other pulp companies in the RGE group follow APP’s lead and commit to a No Deforestation policy with an immediate moratorium on all forest clearance.” 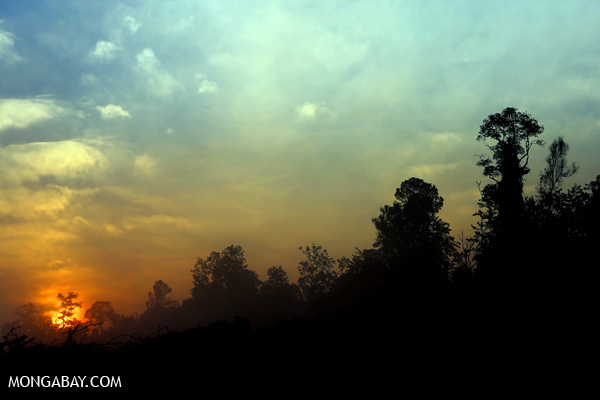 Sunset over an APP supplier concession in Riau. Photo by Rhett A. Butler.

APP’s commitment could potentially influence other industries that impact forests. For example, palm oil giants Golden-Agri Resources and Wilmar have also made zero deforestation commitments that are being implemented by TFT. Both companies still have substantial areas of natural forests within their existing concessions that could become the basis for forest restoration pledges.

APP’s Greenbury wasn’t ready to comment on the broader implications of the new commitment, but was hopeful that the approach would be successful.

“I really hope that people see [this initiative] as something worth learning from, contributing to and replicating,” she said. “We are proud that we are part of the journey these NGOs are taking in setting a new standard in zero deforestation, and now in landscape forest protection and restoration.”

She added that APP is ready to partners and critics alike to make that happen.

“Past relationships with any of our critics are exactly that – past relationships. History. When we embarked on our journey of transformation we did not imagine that we would immediately be greeted with open arms by everyone. Our focus has been simply to keep going with the business of building trust, transparency and delivering commitments. And I think we are succeeding.”

“As long as we have the same goals, WWF is ready to support APP to help it succeed in its commitments.”