U.N.: We can save world’s forests at a fraction of cost of fossil fuels subsidies 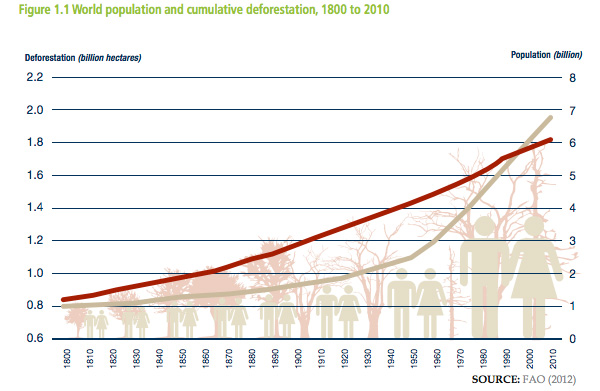 Investing $30 billion a year in forest conservation — less than seven percent of the $480 billion spent annually on fossil fuels subsidies — could help stop deforestation while accelerating a transition toward a greener global economy, asserts a new report published by the International Resource Panel (IRP) and the UN REDD Programme.

The report, titled Building Natural Capital: How REDD+ Can Support a Green Economy, is a push to garner more support for the U.N. Reducing Emissions from Deforestation and Forest Degradation in Developing Countries (REDD+) program, which aims to provide performance-linked payment for protecting forests. The report says that integrating REDD+ into a “Green Economy approach” could boost the social, economic, and environmental benefits forests afford humanity.

“The true value of forests comes to life when national and local decision making processes are directed towards natural capital investment, supporting livelihoods and achieving sustainable economic growth,” said Achim Steiner, UN Under-Secretary-General and Executive Director of the United Nations Environment Programme (UNEP), in a press release. “The ecosystem services provided by tropical forests are estimated at around US $6,120 per hectare per year. Despite this clear macroeconomic case, the total yearly forest loss averages 13 million hectares per year – equivalent to the surface of a football field being destroyed every three seconds.”

The report argues that REDD+ can be integrated into green economic goals, through “including better coordination, stronger private sector engagement, changes in fiscal incentive frameworks, greater focus on assisting policymakers to understand the role forests play in propping up economies, and equitable benefit sharing.” It notes the importance of “a rights-based approach” to ensure that the rural poor and forest-dependent communities benefit from the program. 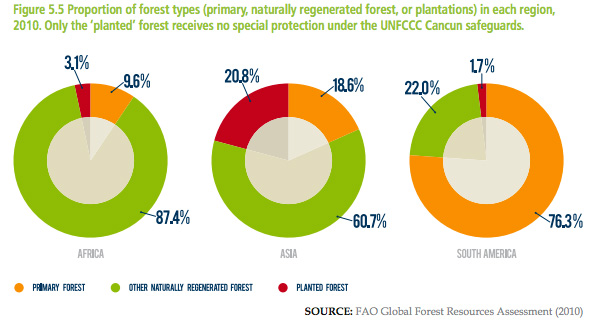 Proportion of forest types (primary, naturally regenerated forest, or plantations) in each region, 2010. Courtesy of UNREDD

REDD+ was proposed in the mid-2000’s and started to gain momentum around 2007 climate talks in Bali. But the program has not been financed at the level supporters say is needed for it to succeed. To date, roughly $6.4 billion have gone into the program. The U.N. and other analysts argue that $30 billion a year will be needed to halve tropical deforestation by 2020.

While the headline number may seem unachievable, the report compares it to the $480 billion that is spend annually on subsidies for fossil fuels. It suggests that some of this spending could be redirected to activities that support greener economic development.

“Re-directing
current subsidies that are harmful to biodiversity or detrimental to climate change mitigation into REDD+ payments may be one solution for generating longer term REDD+ finance. Increasing public and private investments in REDD+ would create productive, profitable, and sustainable landscapes that sequester and store more carbon and will enable enhanced delivery of environmental services – the heart of a Green Economy. 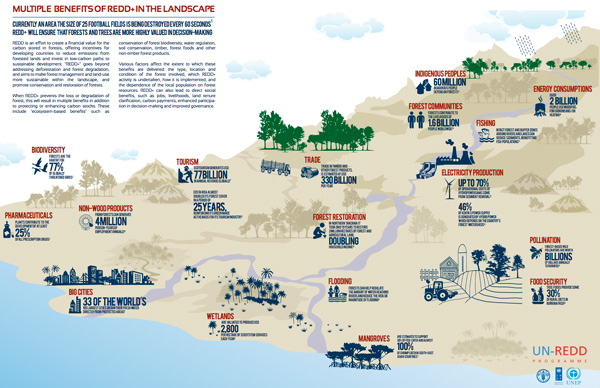 Chart from the report showing how REDD+ could fit into a greener economic development model. Courtesy of UNREDD. Click image to enlarge.