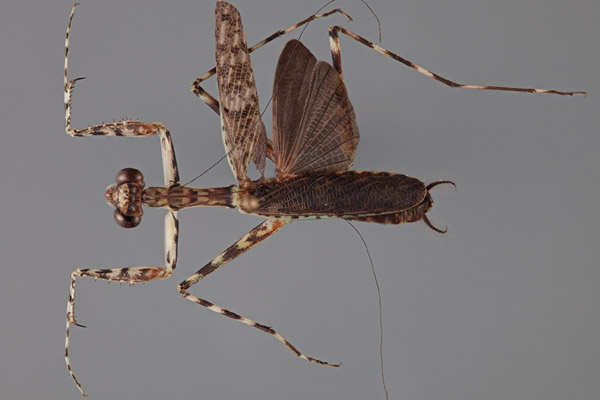 Despite their pacific name, praying mantises are ferocious top predators with powerful, grasping forelimbs; spiked legs; and mechanistic jaws. In fact, imagine a tiger that can rotate its head 180 degrees or a great white that blends into the waves and you’ll have a sense of why praying mantises have developed a reputation. Yet, many praying mantis species remain little known to scientists, according to a new paper in ZooKeys that identifies an astounding 19 new species from the tropical forests of Central and South America.

The new species were discovered and described by a single entomologist, Gavin Svenson with the Cleveland Museum of Natural History, who uncovered them both in the field and as museum specimens. Running to 214 pages, Svenson’s new tome triples the number of praying mantises in the genus Liturgusa in one go. Unlike many praying mantises, Liturgusa mantises, or Neotropical bark mantises, don’t practice cannibalism and are light of foot.

“This group…are incredibly fast runners that live on the trunks and branches of trees,” explained Svenson. “This violates the common perception of praying mantises being slow and methodical hunters.”

Bark mantises are known for their camouflage ability, blending into moss, lichen, or bark–hence their common name. But they are also skittish: when startled these mantises will escape by bolting around tree trunks or jumping off a tree into the leaf litter only to convincingly play dead.

“Individuals easily detect approaching people and will run laterally to the opposite side of the tree when approached during daylight hours, although many have been observed assuming a crouching position before bolting…If pursued, individuals run up the tree at a continuous gate or in spurts, but ultimately achieve unreachable heights. Although their exact speeds are not known, they run incredibly fast,” Svenson writes in the paper.

He calls this behavior “amazing,” since “it shows that they are not only relying on camouflage like most insects but are constantly monitoring their environment and taking action to run and hide.”

Although top insect predators, praying mantises are in turn eaten by birds, fish, frogs, and even other preying mantises.

However, their speediness makes these praying mantis extremely difficult to catch. The best time to find them, according to Svenson, is at night when flashlights saturate their vision causing them to stand still.

Liturgusa mantises are found from Mexico to Bolivia, but some of the newly-described may already be endangered or even extinct. A number of the new species are described from museum specimens collected before the 1950s, their habitat today largely lost to agriculture or urbanization.

Svenson says his research likely implies there are many more praying mantis species waiting to be found worldwide. In addition, genetics research would probably uncover even more, “cryptic” species, i.e. species that look alike to the human eye but are genetically distinct.

“Many of these groups have never been studied other than by the scientists that originally described some of the species, which in some cases is more than 100 years ago,” Svenson noted. “This is exciting because enormous potential exists for advancing our understanding of praying mantis diversity just by looking within our existing museum collections and conducting a few field expeditions.”

Svenson named one of the new species after former Vice President Al Gore—Liturgusa algorei—for his climate change activism. Another new species is named after the Kratt brothers (Martin and Chris Kratt)—Liturgusa krattorum—who host nature shows for kids. Two other species were named for Svenon’s daughters. 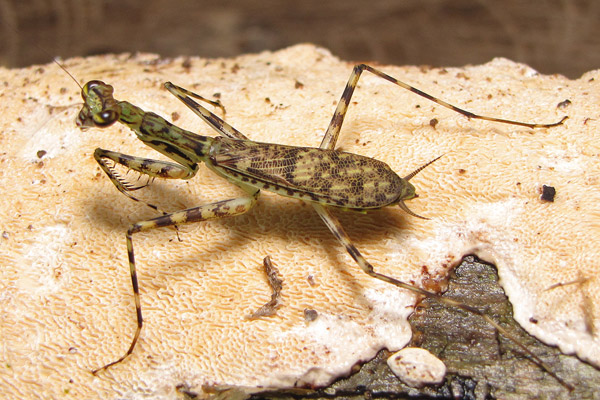 Liturgusa krattorum in life in the Peruvian Amazon. This new species is named for Martin and Chris Kratt of the television show Wild Kratts. Photo by: Gavin Svenson. 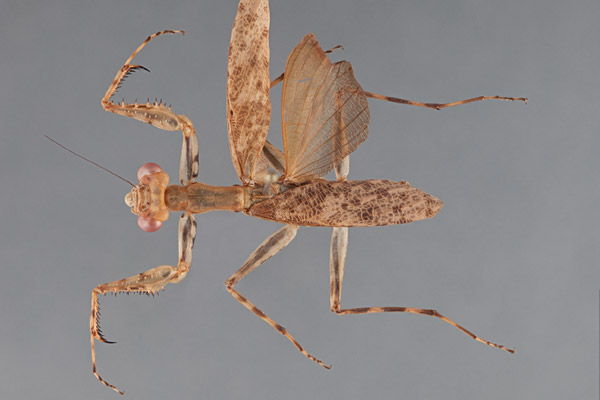 A female specimen of the new species: Liturgusa tessae. Found in Tambopata, Peru this species is named after one of Svenson’s daughters. Photo courtesy of Svenson et al.