Conservationists have succeeded in catching a wild Sumatran rhino in the Malaysia state of Sabah in Borneo, according to local media reports. Officials are currently transferring the rhino, an unnamed female, to a rhino sanctuary in Tabin National Park where experts will attempt to mate her with the resident male, Tam. The Sumatran rhino (Dicerorhinus sumatrensis) is one of the world’s most imperiled species with less than 100 individuals left.

“The rhino fell into a pit trap dug at a site on a known rhino trail deep inside the Danum Valley Conservation Area about six hours’ walk from Yayasan Sabah’s Borneo Rainforest Lodge,” Sen Nathan, Assistant Director and Veterinarian of Sabah Wildlife Department told the Daily Express. “It turned out to be quite an aggressive female and no report of injury on the animal had been received from the field so far.”

According to more recent media reports, the rhino is in good condition. The female is presumably an individual that conservationists have been monitoring for years and attempted to capture several times before this. They are hopeful that she will mate and reproduce with Tam. However, they have been disappointed in the past: another female, Puntung, has yet to become pregnant by Tam despite the best expertise and technology available. Given these difficulties, officials in Sabah were openly talking about moving Tam to Cincinnati Zoo—currently home to two individuals—to mate with the resident female there. However with the successful capture of a wild rhino, this may be on hold.

Tam in his semi-wild sanctuary in Tabin National Park. Photo by: Jeremy Hance.

Sumatran rhinos, which were once found from Borneo to India and Sumatra to Myanmar, were wiped out over the last century by vast deforestation and relentless poaching. Today they are only found in Malaysia and Indonesia, including Sumatra, Borneo, and peninsular Malaysia. While still imperiled by deforestation and poaching, the species’ biggest threat is that most remaining individuals are trapped in dwindling forest fragments with little chance of meeting another rhino, let alone mating. Although there may be more Sumatran rhinos surviving than Javan rhinos (current population of 58), experts believe the Sumatran is actually more at risk since their populations are scattered and in decline, while all the world’s Javan rhinos are found in a single forest where they are successfully breeding.

This dire situation has pushing conservationists to take a bold approach: catching and mating rhinos in local, semi-wild sanctuaries. To date this approach has had one major success: in 2012 a baby Sumatran rhino was born at Way Kambas Rhino Sanctuary in Sumatra, only the fourth successful rhino born in captivity in a century, the other births having occurred in Cincinnati.

“[We] strongly recommend to act now and exchange gametes such as semen and ovocytes (and possibly individuals) between the captive populations of Sumatran rhinoceros in Sabah (Tabin), Sumatra (Way Kambas) and Cincinnati Zoo, when it is still possible,” Benoit Goossens, Director of the Danau Girang Field Centre in Malaysia, said last year. Goossens was the lead author on a paper that argued for mixing the subspecies. While experts have agreed in principle to this plan, it hasn’t occurred yet.

The Sumatran rhino is the only member of the genus, Dicerorhinus. It is the world’s smallest and hairiest rhino species, and scientists believe it may be the closest surviving relative of the woolly rhino that once roamed Europe and Asia. 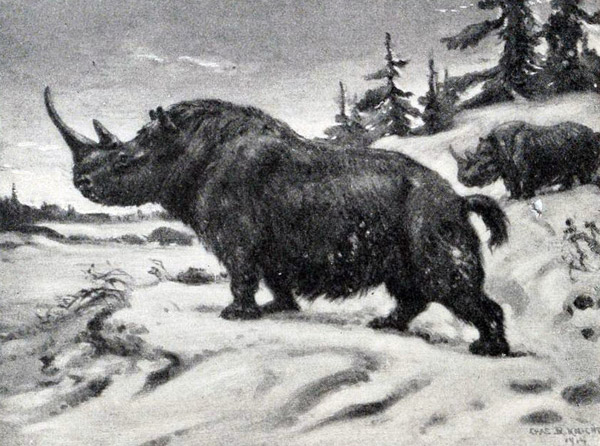