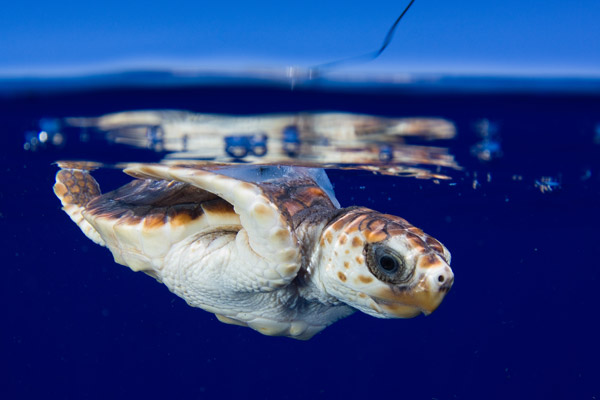 Young loggerhead sea turtle with satellite tag released in the Gulf Stream off the coast of southeast Florida. Photo by: Jim Abernethy.

Kate Mansfield, at her lab in the University of Central Florida, is holding a baby loggerhead turtle, smaller than her palm, painting manicure acrylic on its shell. When the base coat dries out, she glues on top a neoprene patch from an old wetsuit with hair extensions adhesive. Finally, she attaches a satellite tracker on top, the size of a two “party cheese” cubes, with flexible aquarium silicone, powered by a tiny solar battery. Now the little turtle is ready to be released back into the ocean.

“The tags transmit location and temperature to overhead satellites that in turn relay this information to land-based stations and they send it to me in an email!” said Mansfield.

The scientist’s mission is to find out where loggerhead turtle babies hang out—a question none has been able to answer until now.

Many have tried though. In the seventies, some researchers attempted tracking newly hatched turtles acoustically but that was only possible for a few hours after they entered the water. One scientist even tried swimming after them but in a few miles he would inevitably loose the babies’ tracks in the water.

Turtle researchers know that the adult loggerheads spend a lot of their time in the ocean around the Azores, Madeira and Cap Verde, before returning to the East Coast U.S. to lay their eggs. But where the turtles spend their time between emerging from their eggs on a beach in Florida and arriving to the Azores as young adults has always been a mystery. To solve it, Mansfield and her colleague Jeanette Wyneken of Florida Atlantic University developed this novel, “highly sophisticated” tracking method involving non-toxic nail polish, patches from old diving suits for padding and minuscule solar-powered satellite trackers.

When Mansfield’s team released the seventeen tagged turtles off the coast of Florida, they were not surprised that all the youngsters swam north entering the Gulf Stream. 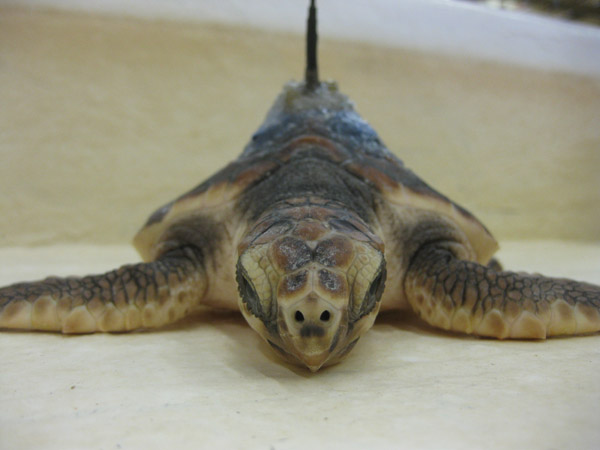 “Loggerhead turtles have an innate magnetic sense and a magnetic map,” Mansfield says. “So, our turtles were ‘hard-wired’ to navigate around the Atlantic Ocean.”

The first surprise the satellite data showed was that the little turtles spent most of their time far out in the open ocean instead of over the continental shelf—the shallower ocean waters near the shore. By contrast, adult loggerhead turtles spend a lot more time closer to the shore.

Then, judging by the excellent quality of the satellite signal and the fact that the antennas were frequently exposed to air, the scientists realized that the little turtles spent most of their time right at the water’s surface hardly ever diving down. As adults, loggerheads often stay close to the surface too, but are also known to dive to more than 300 feet in depth.

The most surprising discovery, however, was that the babies took a detour on their way to the Azores. They exited Gulf Stream to spend most of their time in the Sargasso Sea. A part of the Atlantic ocean, this unique body of water is the only sea in the world bounded only by ocean currents: Gulf Stream on the west, the North Atlantic Current on the north, the Canary Current on the east, and the North Equatorial Current on the south. The sea takes its name from the abundant Sargassum weeds which provide a safe floating habitat to many marine animals, including eels, dolphinfish and, as it turns out, baby loggerhead turtles.

The special thing about Sargassum weed is its color: dark brown. This means it absorbs a lot of the sun’s energy, keeping the surface water in the middle of the Atlantic up to 10 degrees Fahrenheit warmer than in the rest of the ocean. The loggerhead juveniles take advantage of this warm floating microclimate. They are cold-blooded animals so the heat boosts their metabolism and they grow faster.

Additionally, as the loggerheads’ shells are cryptically colored, they hide very well drifting amongst the Sargassum weeds. This special habitat protects them from predators such as sharks and birds and allows them to safely look for food like little crustaceans and zooplankton. The Sargasso Sea serves as a kindergarten where the youngsters can grow safely and fast.

The turtle that kept its transmitter for the longest time before finally shedding it off seven months later, was tracked all the way to the Azores—2,600 miles away from the release point in Florida.

“The most exciting moment in the research was probably releasing the first batch of turtles, seeing the first satellite tracks, and realizing that our ideas worked! Later, looking at the movements and realizing that the turtles were going to places we hadn’t expected and finally putting two and two together about the thermal benefits of living at the sea surface,” says Mansfield. “It’s been an incredibly fun (and often funny) project.” 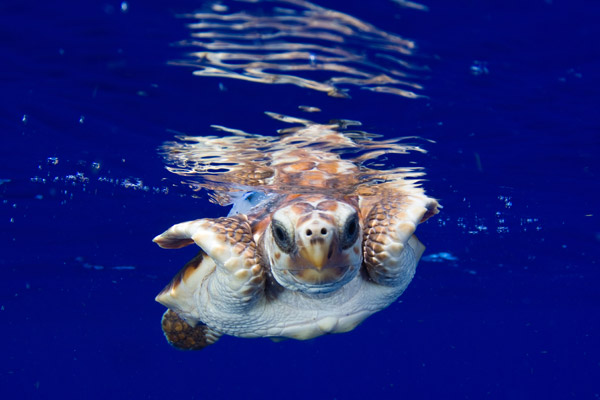 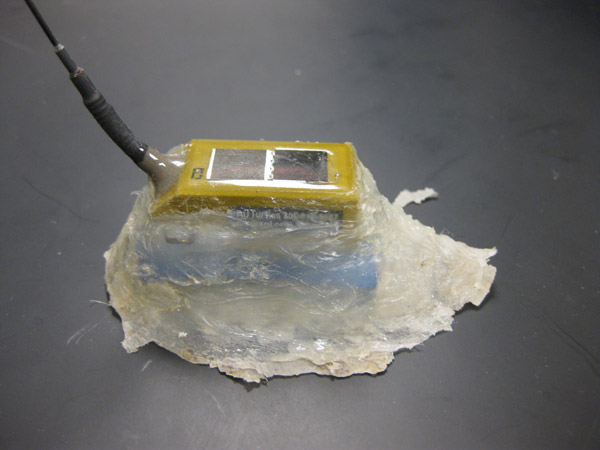 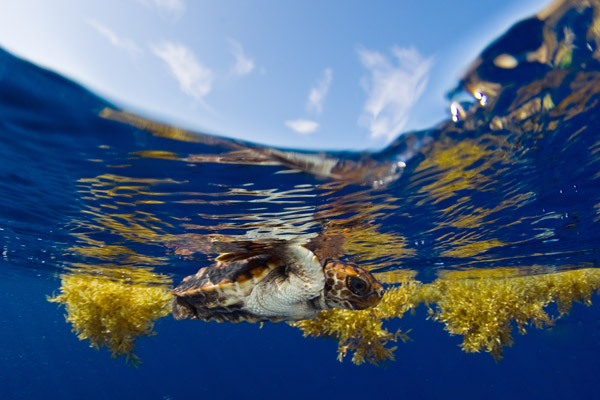 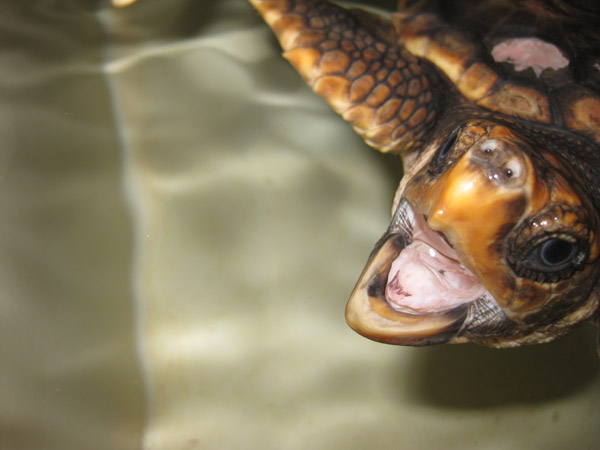 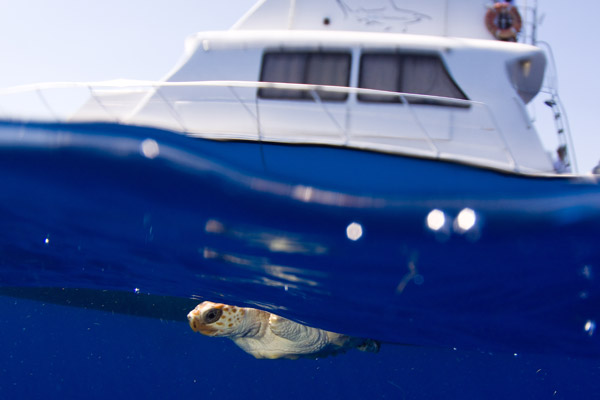 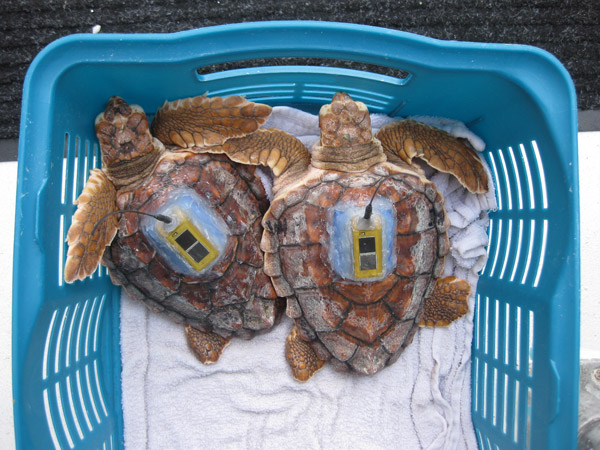 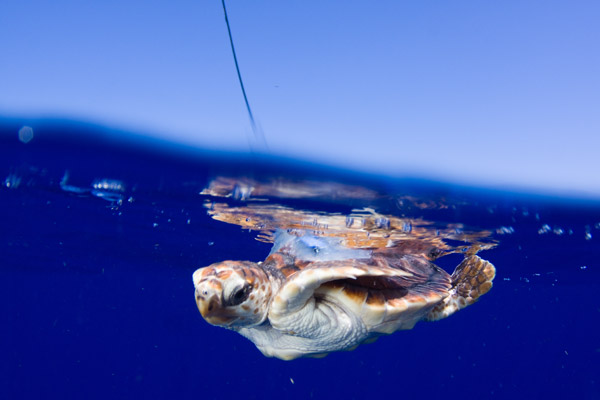 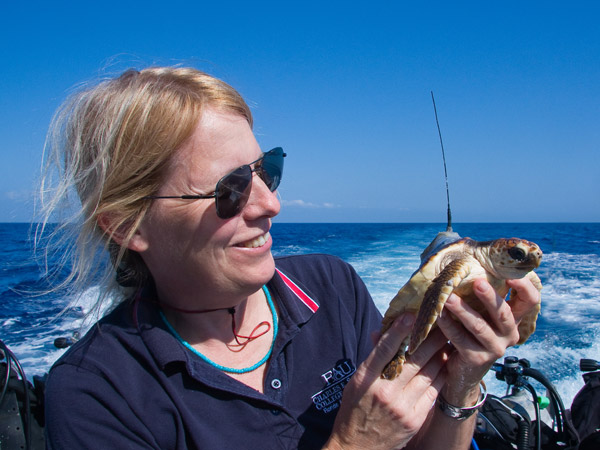