Wonderful Creatures: the tiny, predatory penis-worm that lies in wait in the sand

The seabed is really where it’s at in terms of animal diversity. Of the 35 known animal lineages, representatives of all but two are found here. In contrast, the huge numbers of species that inhabit tropical rainforests represent a mere 12 lineages.

One group of animals that illustrates the diversity of the seabed is the Priapulida, which also go by the unfortunate common name of “penis worms.” Only 20 species of priapulid are known today, a shadow of their diverse past, which extends back for well over 500 million years. Not commonly seen, the priapulids have attracted little attention from the zoology community as a whole.

This week’s animal, discovered in 1973, is perhaps the most interesting priapulid. Named after the leaders of an ancient Jewish rebel army, Maccabeus is a midget amongst its kind—just 1.4 to 2.8 mm and it lives in a tiny, gelatinous tube in the seabed. What’s really odd about this little animal is the way it catches its prey—smaller animals, such as microscopic crustaceans, etc. Much of the body of Maccabeus is concealed in its tube with the head end lying flush with the sea bed and its crown of spines poking up into the water—forming a trap to snare prey. When an unfortunate animal blunders into this trap, the spines close over to form a cage from which there is no escape. Trapped, the prey is sucked into Maccbeus’ mouth and eaten.

Although rarely seen by casual observers, priapulids can be very abundant in some places and densities of 85 adults and 58,000 larvae per square meter have been recorded. They even seem to thrive in anoxic sediments (depleted of oxygen) suffused with eggy, highly toxic hydrogen sulphide—a habitat that few other animals can tolerate. Not only can they be surprisingly abundant, but they, and other very poorly known animal lineages, once collectively known as “lesser lineages,” are fundamental to our understanding of animal evolution as a whole, yet we have only scratched the surface of their biology and ecology. 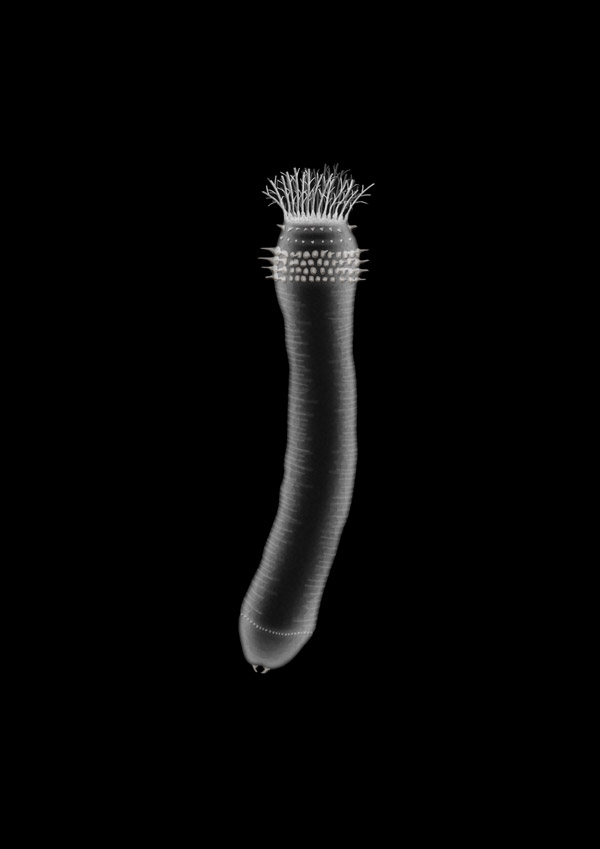 The tiny, tube-dwelling Maccabeus lies hidden in marine sediment with just the spines on its head-end poking above the surface to form a trap. Once sprung, the spines close over to make a cage that ensnares prey. Photo by: © Phil Miller.

(02/26/2014) Small fragments of plastic waste are damaging the health of lugworms, putting a key cog in marine ecosystems at risk. Published in Current Biology, a new study by scientists at the University of Exeter and the University of Plymouth shows the impact of microplastics on the marine worms’ health and behavior.

(02/13/2014) Almost everyone knows what an earthworm is, but these very familiar animals are just one variation on a very rich theme that is at its most fabulously varied in the oceans. The mind-boggling appearances and lifestyles of the marine segmented worms are perfectly exemplified by this week’s animal.

Wonderful Creatures: meet the animal that has evolved a cushy, worry-free life inside an octopus

(01/30/2014) The range of habitats that animals have come to occupy is nothing short of staggering. Take the dicyemids for example. They are among the simplest animals on the planet, with a tiny, worm-like adult body that consists of between 10 and 40 cells. They have no organs, body cavities or even guts—a structural simplicity which is a consequence of where and how they live. The only place you will find adult dicyemids is inside the bodies of cephalopods, typically octopuses and cuttlefish where large numbers of them cling to the inner wall of the mollusc’s kidney.