Thousands of Carnival revelers in Trinidad wouldn’t think of missing the chance to go to Maracas Beach, the most famous strip of sand on the small Caribbean island off the northeast coast of Venezuela. Beachgoers might not think twice about eating a favorite food called “shark bake” either – at least, until now. But this week, conservationists launched a shark-saving campaign timed to get maximum exposure out of the celebration that will bring throngs of visitors to the island. One attention-getting strategy is to put signs along roads to the beach with messages such as: “Did you eat an endangered species today?”

The focus of the conservation campaign is shark bake, or “bake and shark,” a dish that has become a source of national pride for Trinidad and Tobago. Made with deep-fried shark meat tucked between fried bread rolls and topped with a taste bud-boggling array of sauces, the sandwich is used as an advertising tool for tourism. The island specialty has even been showcased by Andrew Zimmern on the television show “Bizarre Foods America.” (video below) 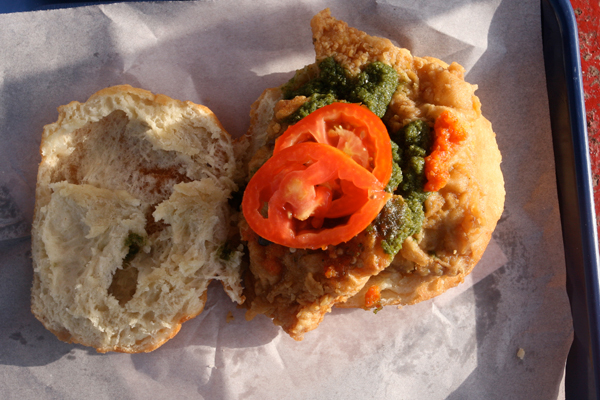 “Unfortunately this pride is unsustainable,” said Marc de Verteuil, a director of the local environmental organization, Papa Dois Conservation. “When consumers buy ‘shark’ it’s never named by species. It is entirely possible that an endangered or CITES-protected shark species is between the bake.”

Sharks are in trouble everywhere. A global analysis of the status of 1,041 species of sharks, rays and chimaeras (ghost sharks) published in eLife last month showed that one-quarter of these species are threatened. And those numbers may not reflect the reality of the situation, according to Nick Dulvy, a shark specialist for the International Union for the Conservation of Nature (IUCN) and one of the contributing researchers. No one even knows exactly how many sharks and rays exist, he noted; there may be as many as 1,150 species described. For almost half of the species in the study – of which 465 were sharks – there wasn’t enough data for effective estimation.

“Often times shark populations were already hammered by the time we got around to start counting them,” said Angelo O’Connor Villagomez, manager of global shark conservation for The Pew Charitable Trusts. “The lions and tigers of the ocean are disappearing, and nobody knows about it.”

The market for sharks is huge. It’s estimated that the annual shark fin trade alone is worth up to $550 million. The fish are also killed for meat, as well as their cartilage and liver oil, which are used in health supplements and cosmetics. To meet this demand, about 100 million sharks are pulled from oceans every year, according to Villagomez. Overfishing of these top predators has repercussions that echo down the food chain, throwing ecosystems off balance.

The islands of Trinidad and Tobago (T&T) are major players in the international shark fin trade. In 2010 the island nation was ranked 19th among the 87 countries that export shark fins to Hong Kong – the world’s largest shark fin market. A year later, T&T jumped to the number six spot according to data from the Census and Statistics Department of Hong Kong referenced in a Pew Environment Group report.

Sharks can’t keep up with that kind of demand. They mature slowly and, like humans and whales, have long gestation periods. For example, the great hammerhead (Sphyrna mokarran) doesn’t mate until it’s almost ten years old, has a gestation period of 11 months and only produces offspring every two years. A case study that included managed populations of tiger sharks (Galeocerdo cuvier) and scalloped hammerheads (Sphyrna lewini) in the southeastern U.S., led by Canadian researcher Helke Lotze and published in the Journal of Fish Biology, showed that overexploiting these species by just two to six percent could keep them from recovering their numbers.

“Our analysis shows that sharks and their relatives are facing an alarmingly elevated risk of extinction,” said Dulvy. The good news is that local efforts can have a positive impact on shark numbers. Fisheries management is a local issue and having some protection – rather than none – would go a long way toward saving sharks and rays, said Dulvy. But getting solid numbers to persuade governments to stop shark fishing isn’t easy. Most catches of sharks and rays are unregulated and often misidentified, unrecorded, aggregated, or discarded at sea, resulting in a lack of species-specific landing information, according to Dulvy. Moreover, the Caribbean Sea was one of the most “data deficient” areas in his study. 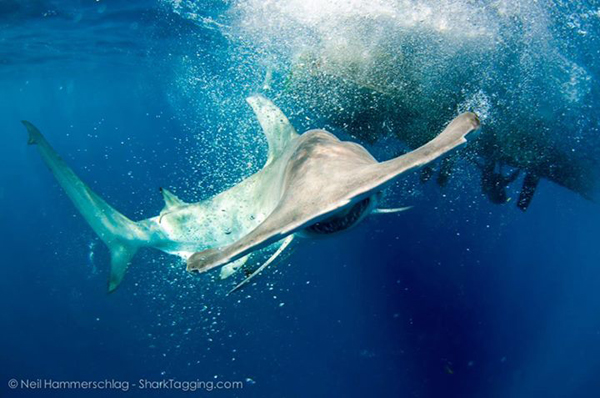 Endangered — the Great Hammerhead shark Sphryna mokarran is a large, widely distributed, tropical shark largely restricted to continental shelves. It is highly valued for its fins (in target and incidental fisheries), suffers very high bycatch mortality and only reproduces once every two years, making it vulnerable to overexploitation and population depletion. Photo credit: Neil Hammerschlag with permission from Marine Biodiversity & Conservation

In Trinidad and Tobago that information gap will likely need to be filled by citizen science, according to de Verteuil. He wants accurate numbers with which to present a compelling, scientifically sound argument that shows conclusively that T&T are consumers of endangered sharks.

“Our eventual goal is total shark protection, as is the case in the Bahamas,” he said.

In the meantime, he’s promoting alternatives such as “bake and lionfish” or “tilapia bake” that still show support for the national sandwich but offer a more sustainable option.

However, even when protections are in place, sharks are still at risk. In Western Australia, the state premier obtained an exemption from federal laws to order the killing of big bull, tiger or great white sharks that swim too close to the tourist-attracting beaches. Although a small number of sharks have been killed so far, the situation created an international media furor and cast a shadow over the environmental reputation of the country, which is already suffering due to the approval of industrial projects in the Great Barrier Reef.

The outrage sparked by the Western Australian shark cull should serve as a lesson, believes de Verteuil.

“What will be the international reaction when the world learns about Trinidadians eating sharks and enabling the sixth largest export of shark fin to Hong Kong?” he said.

In Villagomez’s experience, most people are receptive to conservation when they find out how much overfishing threatens shark populations. He noted that small islands with big oceans have taken the global lead on shark conservation and there is potential for the Caribbean to be a part of that effort.
“Bake and shark isn’t the most important reason why sharks are in danger, but we do believe that it is a leverage point which can be used to change the mindset of Trinidadians and Tobagonians towards shark conservation, exactly because it is something that touches the life of nearly everybody in T&T,” de Verteuil said. “We’re a small island nation, but our attitude can have a big impact on shark conservation worldwide.”

The host of bizarre foods talks about sharks at 2:10.

(01/16/2014) Environmental groups have blasted draft text of the Trans-Pacific Partnership (TPP) released yesterday by WikiLeaks as potentially devastating to the environment and wildlife. The massive 12-nation free trade agreement has been negotiated in secret now for almost four years, and the information release by WikiLeaks shows that key environmental safeguards in the agreement are being stripped away, including a ban on shark finning and illegal logging, as well as legally-enforced pollution regulations.