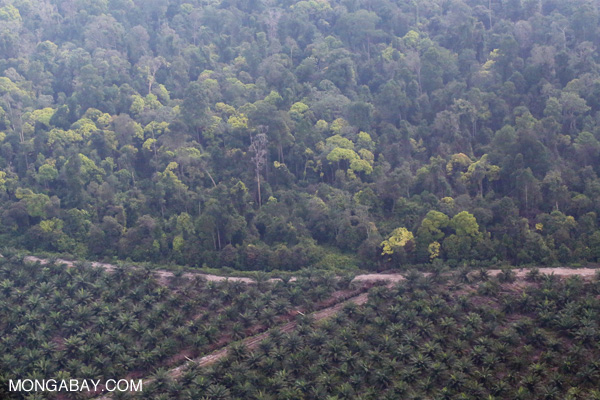 Oil palm and cleared forest in Riau. Photo taken by Rhett A. Butler in February 2014.

Versatile is the best way to describe the reddish brown fruit born from oil palm trees. Both the flesh and seed of the fruit is used in many applications including cooking, cosmetics, and biofuel. In addition, the fruit is composed of 50 percent oil, making it a highly efficient product that requires less land than other oil producing crops.

Palm oil is cultivated in the tropical regions of Asia, Africa, and South America. However, 85 percent of global production comes from Malaysia and Indonesia. The rural regions of these countries strongly benefit from a commodity that is in high demand as a raw material or as an edible ingredient.

Indonesia produced 9 million tons of palm oil in 2011, making it the world’s largest producer. The country aims to double production over the next decade by expanding production from its tropical forests to peatlands, located closer to coastlines. The impact of this shift is expected to be substantial, as shown by recent research that assessed greenhouse gas (GHG) emissions from oil palm expansion in Riau Province, on the island of Sumatra.

Unlike other scientists’ research into GHG emissions from palm oil, graduate researchers Fatwa Ramdani and Masteru Hino of Tohoku University in Japan, looked into emissions on a provincial scale as opposed to an Indonesia-wide scale. They found that palm oil expansion in Riau resulted in an average of 5.2 million tons of carbon dioxide emissions per year from 2000 and 2012. Nearly 70 percent of the emissions resulted from plantations on peat soils. 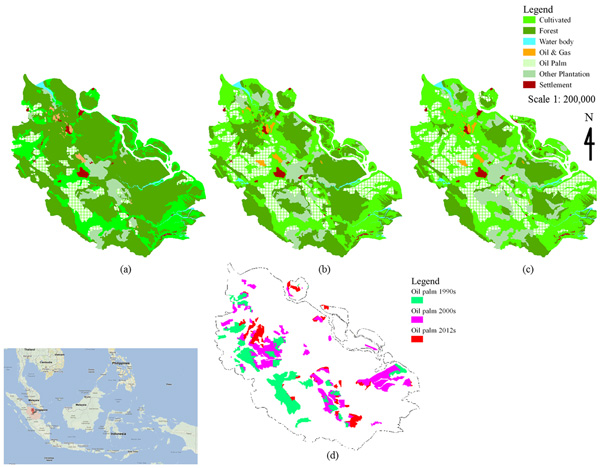 Study area and oil palm development in Riau. Courtesy of the authors.

In contrast, 60 percent GHG emissions from plantations in the 1990’s resulted from conversion of forests. The results indicate that carbon-dense peatlands have been increasingly targeted by the palm oil industry in Riau, raising further questions about the industry’s sustainability. 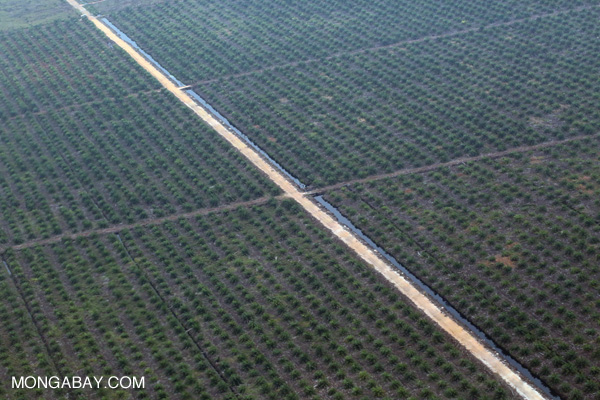 Oil palm plantation on drained peatlands in Riau in February 2014. Photo by Rhett A. Butler.

The importance of peatlands

While both tropical forests and peatlands provide many important ecosystem services such as a refuge for biodiversity, the provision of clean air and water, and carbon sequestration, peatlands are the undisputed champion of carbon storage. These systems are wet, damp, and muddy, so any dead vegetation is slow to decompose. Thus, carbon taken from the atmosphere by plants is stored indefinitely in the tissues of living and dead materials. But when these systems are disturbed or altered, the stored carbon is released.

And indeed Riau’s peatlands are being disturbed on a massive scale—between 2000-2012, 137 multinational and two public companies occupied Riau. Overall natural forest cover plunged in the province from 63 percent in the early 1990’s to 22 percent in 2012. 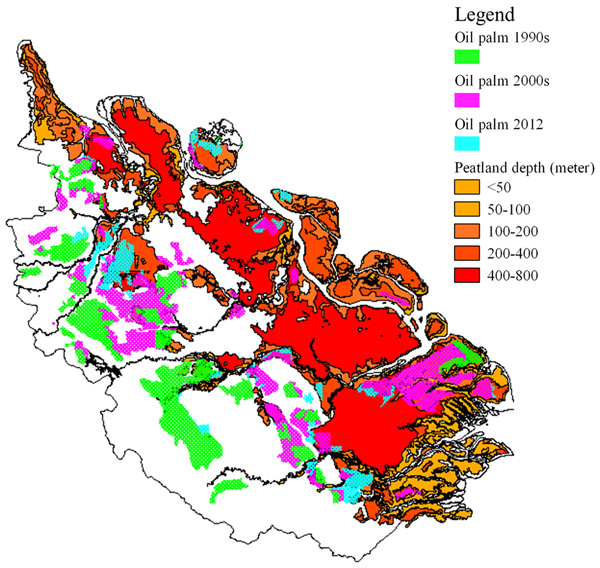 Oil palm development on peatlands. Courtesy of the authors.

Ramdani explained why, despite poorer nutrient levels compared to tropical forests, conversion of peatlands is growing in Riau.

“Oil palm trees require a lot of water, and peatlands are very flat, making them easier to irrigate,” the author told Mongabay.com, adding that the benefits to business are not based purely on physical practicalities. “Unlike other systems, peatlands generally receive little to no protection from government moratoriums.” Thus, peatlands are prime exploitable areas for companies looking to occupy and convert large tracts of land into plantations.

However there are emerging signs that Riau’s peatlands may soon be better protected. Institutions like the Roundtable on Sustainable Palm Oil (RSPO) are beginning to strengthen standards for production, while two palm oil giants—Wilmar and Gold-Agri Resouces—have recently committed to avoiding conversion of peatlands for new plantations. But ultimately only consumer demand for more sustainable palm oil will ensure that Riau’s peatlands will be around to sequester carbon and provide wildlife habitat in the future.