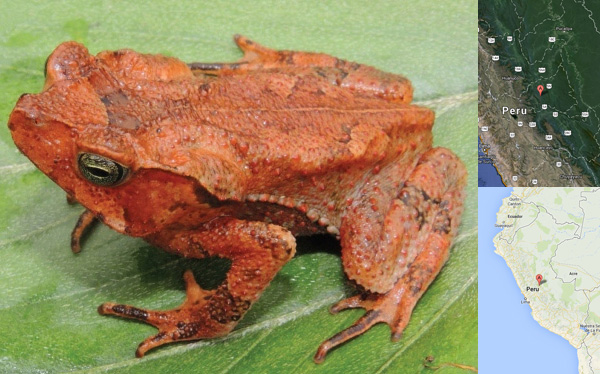 Scientists have described a previously unknown species of dead-leaf toad in the Peruvian Andes.

The species, which is a master of camouflage, is named Rhinella yunga after the Yungas, the montane forest ecoregion it inhabits. It lives in leaf litter, where it blends in with its cryptic coloration and leaf-like body shape.

“It appears that large number of still unnamed cryptic species remains hidden under some nominal species of the Rhinella margaritifera species group,” said Moravec, a biologist at the National Museum Prague in the Czech Republic.

To date 16 species are recognized in the Rhinella margaritifera group.

Like other toads in the Bufonidae family, Rhinella yunga has toxic glads on that back of its head.

“The poison is excreted by the toads when stressed as a protective mechanism,” explained a statement from Pensoft, the publisher of ZooKeys.

However unlike its close relatives, Rhinella yunga lacks a tympanic membrane, the membranous part of the hearing organ typically seen on both sides of a toad’s head.

The Rhinella yunga individuals used in the study were collected in Yanachaga-Chemillén National Park and the Pui Pui Protected Forest in the Yungas, montane forests on the Eastern slope of the Andes in Peru and Bolivia. The yungas, which represent the upper reaches of the Amazon rainforest, have experienced a sharp increase in deforestation in recent years, according to satellite data. 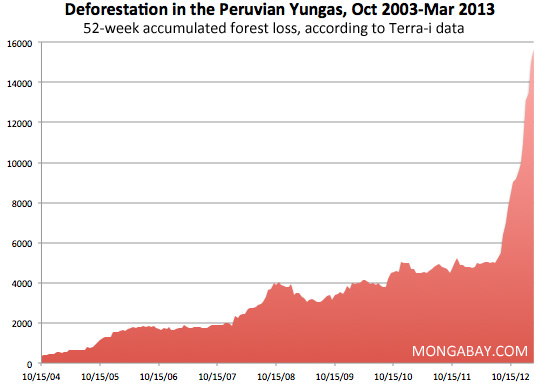 Deforestation rate in the Yungas ecoregion in Peru, Oct 2003-Mar 2013, according to data from Terra-i..