For agoutis, the night is fraught with peril

Scientists discover clear temporal patterns between the ocelot and its agouti prey.

The early bird might get the worm, but, as scientists have discovered, the bird is also quite likely to become a cat’s meal.

In a study recently published in the online Animal Behavior journal, scientists from the US and the Netherlands have examined the impact of predation patterns on prey’s food foraging habits. The two-year long study on Barro Colorado Island, Panama, focused on the predator-prey relationship between the Central American agouti (Dasyprocta punctata), a common rainforest rodent, and the ocelot (Leopardus pardalis).

Agoutis, which look like long-legged guinea pigs, are a common prey item for the ocelot, a medium-sized cat native to the Neotropics. 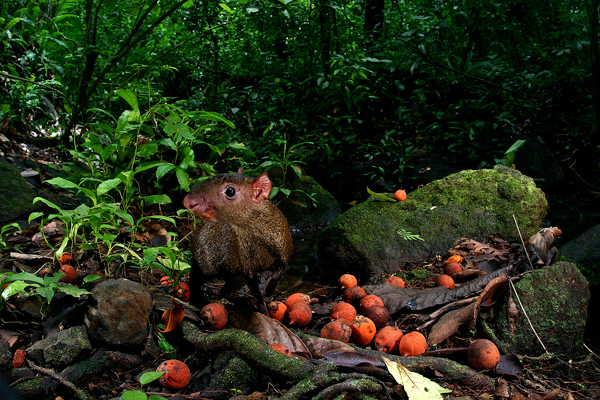 “The ocelot-agouti relationship is a beautiful example of a predator-prey interaction,” Patrick Jansen, a researcher with the study, told mongabay.com. “This example was easy to study on Barro Colorado Island, where both species are relatively common.”

Jansen’s study was the first to look at the temporal pattern of ocelot predation and the long-term food supply of its prey, the agouti. In plainer terms, every time an agouti goes out to forge, it does a risk-benefit analysis. Is it better to stay in its den and be hungry, or get food and risk becoming cat food? As it turns out, the answer is heavily dependent on what time the agouti goes out.

The team utilized modern technology for reliable data. “We used radio-collars mounted on agoutis to follow their whereabouts and fate, an automated telemetry system to continuously ‘listen’ to radio signals, and camera traps to record activity patterns of ocelots and agoutis, as well as the use of burrows by agoutis,” Jansen explained.

In all, the study collard 36 agoutis and used camera traps in 1,371 different locations over 11,123 days, as well as monitoring local food abundance by counting the local number of Astrocaryum fruits, a common agouti food. Throughout the study, scientists looked at the activity ratio between agoutis and ocelots and the ratio between fruit and agoutis to see if there was a temporal, or time-based, pattern.

The scientists found that agoutis and ocelots’ activity peaks do not overlap: 94.5% of the agoutis’ activity takes place during daylight hours, while 77.8% of ocelot’s takes place between sunset and sunrise. The agouti’s and ocelot’s night and daytime ratios are polar opposites. In fact, during sunlight hours, the study discovered that there is one ocelot for every 500 agoutis. At nighttime, there are 30 ocelots for every one agouti.

Jansen says, “Overall hunting success of ocelots (the amount of captures per unit effort spent) will probably be higher during the night, where cats with their night vision are at an advantage.”

In fact, 62.5% of the collared agoutis’ deaths took place at night, what the study refers to as a “high-risk period,” since it’s the ocelot’s peak activity hours. So if you’re an agouti, staying in at night is probably a good idea, if you can afford to.

“Agoutis that had more fruit trees in their home range got up later in the morning and went back into their burrows earlier in the evening,” explained Jansen. The more food an agouti has access to, the fewer risks it needs to take to stay full. The empirical data the team collected could prove this long-established theory that preys’ foraging behavior is dependent on predators’ movements.

“We cannot tell from our study whether the theory applies to other predator-prey system as well as it applied to ocelots and agoutis,” Jansen told mongabay.com, “but it would not surprise me. These responses would perfectly make sense for any prey species.”

You can read the team’s blog and watch camera trap videos at The Agouti Enterprise.

(11/13/2013) Wolves and grizzlies aren’t best buddies. Burly bears can barge in on a feasting pack, making off with the wolves’ fresh kill. Wolves have been known to dig into bear dens and snag a cub. But after gray wolves returned to Yellowstone National Park in 1995, grizzly bears ate more berries in the summer for a pre-hibernation nutritional boost, researchers reported Sept. 4 in the Journal of Animal Ecology