Asia Pacific Resources International Holdings Ltd (APRIL), Indonesia’s second-largest pulp and paper producer, has announced a new environmental policy that aims to stem criticism about its forestry practices, which include large-scale conversion of rainforests and peatlands in Sumatra. But environmentalists say the pledge falls far short of the commitment made by APRIL’s biggest competitor, Asia Pulp & Paper (APP), last year.

The policy, announced with much fanfare Tuesday in Jakarta, commits APRIL to a moratorium on plantation development in areas that have yet to undergo high conservation value assessment. APRIL also pledges to end establishment of new plantations by December 2014 and phase out deforestation for fiber production by 2019. The company also plans to restore an area of forest representing just under 5 percent of its concession area and says it “[strives] to support conservation areas equal in size to APRIL’s plantation area.”

The targets however are substantially weaker than those set under APP’s policy. Accordingly, activist groups immediately blasted APRIL.

“APRIL’s carefully orchestrated policy announcement is essentially a license to continue forest clearance,” said Zulfahmi, Greenpeace Southeast Asia Forest Campaigner, in a statement. “A glaring weakness is that it would allow its current suppliers to continue to destroy forest and peatlands for nearly a year, and give it another six more years until it would stop using rainforest fibre at its mill.” 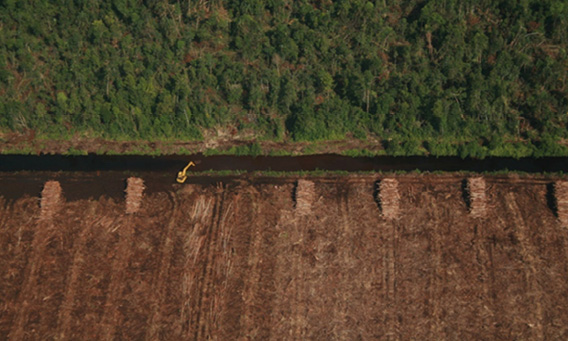 Unlike APP’s policy, which applies to all of its subsidiaries and suppliers globally, APRIL’s policy is limited in scope, according to Lafcadio Cortesi of the Rainforest Action Network.

“The policy is limited in the scope of forests it will protect as it fails to cover APRIL’s broad array of sister companies and suppliers,” Cortesi said in a statement. “It is also rife with major policy gaps, including the restoration and preservation of natural forests and it contains large loopholes on the critical issues of human rights, peatland development and high conservation value forests.”

APRIL’s motivation for establishing the policy wasn’t immediately clear, but the announcement comes just days after the World Business Council on Sustainable Development, a global group of 200 large international companies pushing for greener business practices, warned that the forestry giant faces expulsion if it doesn’t quickly reform its sourcing and forest management practices. It also preceded by two days the news that Rainforest Alliance, an NGO know for its eco-certification expertise, will serve as an independent auditor of APP’s implementation of its forest conservation policy, which was signed last February.

Still APRIL’s announcement was “cautiously welcomed” by WWF, which remains a hostile critic of APP.

“If APRIL truly fulfills the entire commitment in the policy, it will lead to a positive contribution to Indonesia’s forests, biodiversity, emission reductions and people,” said Efransjah, CEO of WWF-Indonesia, in a statement.

Like Greenpeace and RAN, WWF called on APRIL’s owner, the Royal Golden Eagle (RGE) Group, to implement forest protection policies across its web of businesses, which span logging to palm oil to woodpulp. Greenpeace says the conglomerate is one of the biggest corporate drivers of deforestation in Sumatra, which has lost vast areas of wildlife-rich rainforest and carbon-dense peatlands in recent decades.

Campaigns by Greenpeace and other groups have cost APRIL dearly, including loss of its FSC certification and customer defections.

APRIL did not respond to request for comment for this story.