by Shreya Dasgupta on 3 December 2013

Legend has it that lonely sailors mistook them for beautiful, mythical mermaids. But as it turns out, the muse behind these beguiling sea nymphs was instead the dugong – a rather ungainly, gentle and mini-bus sized marine mammal, cousin to the manatees and part of the sea cow family. However, while they may have once fuelled stories for fairytales and Disney movies, their far-from-glamorous life is currently under serious threat in many parts of the world.

One such threatened population dwells in the Andaman and Nicobar Archipelago, a group of islands in the Indian Ocean. The dugong (Dugong dugon) distribution here has plummeted by more than fifty percent over the last 50 years, according to a recent study published in PlosOne. In the sites where dugongs persist, the researchers found that they show location fidelity, seeking out the same areas they did 50 years ago instead of populating new ones.

Researchers Elrika D’Souza and Vardhan Patankar began studying dugongs in 2007, their first encounter with one of these gentle giants lasting over a five-hour swim. Currently at the Nature Conservation Foundation at Bangalore, India, D’Souza and Patankar continued to observe the behavior of the few dugongs of the archipelago they could individually spot and identify. But as reports of dugongs in the area declined, they decided to broaden their study to include the local distribution of dugongs in the past as well as the present.

To achieve this, D’Souza and her team collected two kinds of data – historical data that would give them a glimpse into the dugong’s past distribution, and current data that would tell them how they fare now.

For the former, they looked through newspaper clippings, fishery bycatch records, forest department records and prior publications, as well as interviewed wildlife experts working in the islands to determine where dugongs had been seen in the past. They collated a total of 55 records of 124 individual dugongs extending over the last 50 years (1959-2009).

The team then used this data on dugong presence and absence in the different seagrass meadow locations, to predict where dugongs might have occurred in the past across the islands.

“This is one of the few studies that have actively used the historical data itself to predict past occupancy of an animal,” said Nachiket Kelkar, a researcher at NCF and co-author of the study. “This approach has hardly been used for large marine mammals elsewhere. So this is one of the significant contributions of this work.” 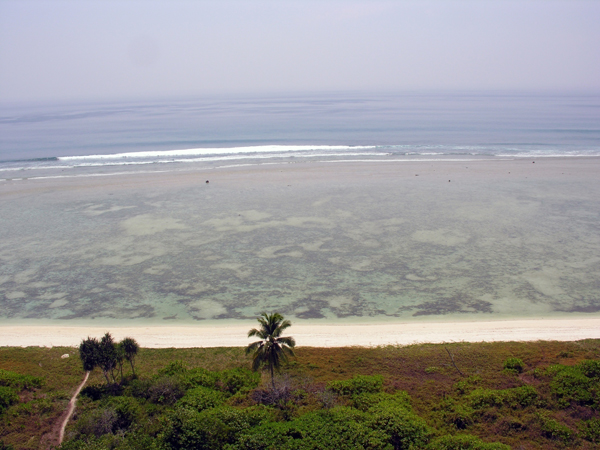 An aerial view of a seagrass meadow. Photo by Vardhan Patankar.

Between 2010 and 2012, D’Souza and Patankar surveyed the ocean from a boat and recorded the locations of all the dugongs they could spot. To complement this, the two also snorkeled through the waters to look for indirect signs of dugong presence.

“We did not rely on direct sighting of the dugongs, because sighting dugongs is really really difficult,” said D’Souza. “If the dugongs are in large herds, then it is easy to sight them. But here we are dealing with animals which are mostly individuals or in some cases two to three individuals together. So we relied on signs in addition to direct sightings.”

The most conspicuous of these indirect signs are the feeding trails that dugongs leave in the seagrass meadows. Made up of species of flowering plants called seagrass, these underwater grasslands serve as feeding grounds for the dugongs. Like lawn mowers, they eat their way through the meadows, uprooting seagrass like pigs and leaving behind unmistakable serpentine trails. This, D’Souza and Kelkar point out, is one sure-shot way of detecting the furtive animals that go unseen.

In addition to collecting information about the dugongs themselves, the team also measured characteristics of each seagrass meadow location, noting signs of any human disturbance. These signs included the use of gillnets for fishing, boat traffic, or hunting.

They modeled this evidence, together with dugong presence and absence observations within each meadow location, to estimate the proportion of meadows that are currently occupied by dugongs. These models also allowed incorporation of prior information.

“For instance the current occupancy might be influenced by the historical occupancy,” said Kelkar. “So if we wanted to estimate the probability of site ‘A’, we also looked at what the historical occurrence of dugong was at that site, which becomes the ‘prior information’.”

Estimates from their models indicated that dugong distribution has declined drastically over the last 50 years, due more so to entanglement in gillnets and hunting than to declines in seagrass meadows.

“We quantitatively found out that it is not the habitat that is really limiting. People would say that because of activities like coastal dredging seagrass meadows are reducing and dugongs don’t have anything to feed on. That could be a potential driver but at a very small localized scale,” said Kelkar. “Instead what we clearly found was that dugong occupancy over the last 50 years showed very serious declines in areas where hunting is still prevalent.”

Hunting in the island consists of two kinds – illegal hunting by some settlers in the islands who opportunistically kill dugongs for meat and oil, and hunting that is allowed legally. The latter includes hunting by the indigenous tribes of the islands, such as the Nicobarese, the Onge and the Great Andamanese, whose traditional practice of hunting dugongs is exempt from the Wildlife Protection Act (1972) of India. The Act otherwise prohibits hunting of species on its Schedule I list, such as the dugong.

“But what we found was that in Great Nicobar, where only the Great Nicobarese live, hunting appeared to have almost extirpated local dugong populations,” says Kelkar.

The team thus believes that even the low levels of traditional hunting might be detrimental to the survival of dugong populations. This could be especially true since dugongs are slow breeders, producing calves once every five to seven years after long pregnancies lasting more than a year. 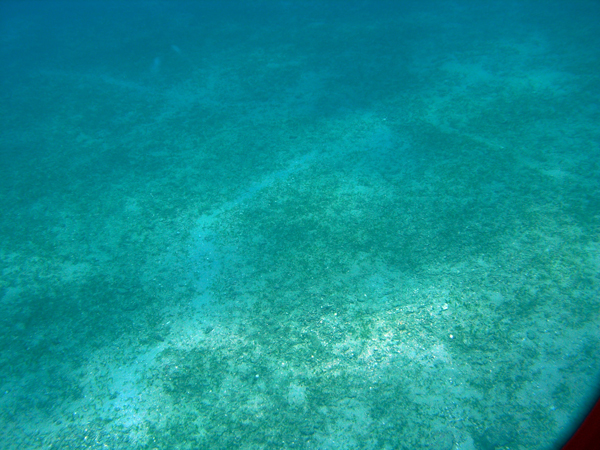 The team believes that the issue is a sensitive one. On one hand are the traditional practices of threatened indigenous communities, and on the other are the threatened dugongs. Successful conservation of dugongs thus necessitates engaging with these tribes for whom the marine mammals hold a strong cultural and heritage value.

“Since dugongs have such a value to them, it makes sense to conserve them now, so that they can continue their harvest in the future,” he said. “If they completely hunt them out, then the whole symbolic value of the species is also gone for them permanently.”

In areas where indigenous communities do not hunt, strict enforcement of hunting bans would be critical to saving the dwindling dugong populations, say the authors.

D’Souza believes that to protect the dugongs, it is also very important to protect their seagrass meadow habitats for this is where the dugongs spend most of their time. Together with the forest department, D’Souza and her team are currently working to prioritize sites for dugong conservation based on how dugongs use them, existing threats to the sites, as well as characteristics of the seagrass meadows.

“Changes in the seagrass meadows are caused not only by the dugongs feeding on them; but these can also be affected by currents, storms, flow of a lot of sediments into an area,” said D’Souza. “So based on these we are trying to come up with high priority sites where immediate action is required in some way, and sites where only monitoring is sufficient for these animals.”

Dugongs, currently listed as Vulnerable by the IUCN Red List, are estimated to number just 200 individuals in India, according to a report recently released by the Wildlife Institute of India. The largest populations are known to occur in the Gulf of Mannar and Palk Bay, Andaman and Nicobar Islands are next, trailed by the Gulf of Kutch with very few individuals.

In the absence of long-term systematic surveys in these regions, dugongs remain the mystical creatures sailors once thought them to be.

“There are dugongs even in Thailand and Indonesia. We don’t know if they are connected with the Andaman and Nicobar populations,” said Kelkar. “These are things that we still need to figure out, and that will come through better surveys, as well as systematic and robust estimates of distribution.”

(11/17/2010) A shark sanctuary has been declared around the Raja Ampat islands in Indonesia. Larger than Denmark, the new sanctuary covers 17,760 square miles (46,000 square kilometers) of one of the world’s richest marine biodiverse region, the Coral Triangle. Protections not only cover sharks, but dugongs, marine turtles, mobulas, and manta rays as well. In addition, reef bombing and fishing for the aquarium trade are banned.

(10/24/2010) Dolphins, whales, and dugongs will be safe from hunting in the waters surrounding the Pacific nation of Palau. At the Convention on Biological Diversity (CBD) in Nagoya, Japan, Palau’s Minister of the Environment, Natural Resources and Tourism, Harry Fritz, announced the establishment of a marine mammal sanctuary covering over 230,000 square miles (60,000 square kilometers) of the nation’s waters, an area the size of Mongolia.