Noises from pile-driving, explosives, ship motors and other industrial activities have all been linked to adverse effects on marine wildlife. A new study, funded by the US Navy and published in Proceedings of the Royal Society B, suggests that military sonar may be directly impacting whale behavior.

The idea that sonar might affect the behavior of whales is not new. A number of reports in the past have linked the use of military sonar to mass stranding events of beaked whales and baleen whale species. Yet the hypothesis has remained controversial because although researchers have observed these effects, they have no idea how exposure to sonar could cause whales to strand themselves.

One of the leading hypotheses is that sonar might disrupt communication between whales, either by interfering with sound waves or damaging their hearing. Yet this theory doesn’t offer a clear biological explanation.

“The strong impact of mid-frequency naval sonar is puzzling because the frequency of…hearing of many toothed whales (Odontoceti) are much higher than mid-frequency sonar,” the researchers write in the paper.

Mass stranding events have been noted since 1874, but the frequency and severity of these events has increased since the introduction of naval sonar in the 1950s. Most studies on mass stranding have looked into the correlations between the timing and location of military exercises and mass-stranding events, but such studies make it difficult to directly infer cause and effect.

To solve this problem, scientists from The Southern California Behavioral Response Study (SOCAL-BRS), looked at the impacts of sonar on the behavior of individual blue whales (Balaenoptera musculus) by placing tags on them to track both their exposure to sonar and their movements.

“The tag technology we use offers a unique glimpse into the underwater behavior of whales that otherwise would not be possible,” said Ari Friedlaender, a research scientist at Duke Marine Laboratory. 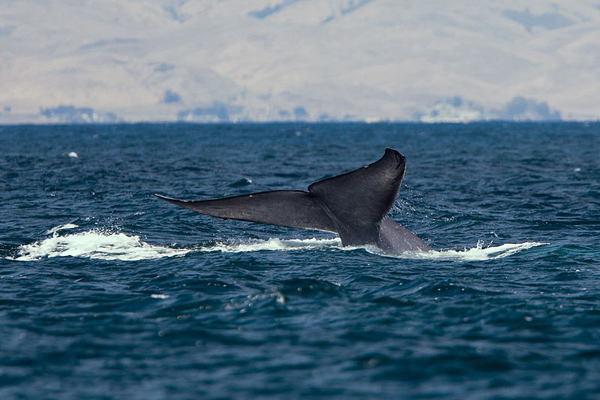 A blue whale fluke off the coast of California. Photo courtesy of “Mike” Michael L. Baird under a Creative Commons Attribution 2.0 Generic license.

Brandon Southall, SOCAL-BRS chief scientist, added that “these are the first direct measurements of individual responses for any baleen whale species to these kinds of mid-frequency sonar signals.”

The results of the study lend weight to the hypothesis that sonar does directly alter whale behavior.

“Whales clearly respond in some conditions by modifying diving behavior and temporarily avoiding areas where sounds were produced,” said Goldbogen. “But overall the responses are complex and depend on a number of interacting factors, including whether the whales were feeding deep, shallow or not at all.”

The study took place off the coast of California, in an area with frequent military exercises using sonar. The authors hope that these findings, along with similar results of a related study on Cuvier’s beaked whale, will increase awareness of the effects of sonar on whale behavior.

“These findings help us understand risks to these animals from human sound and inform timely conservation and management decisions,” said Southall.

(09/25/2013) An oil company’s use of a high-frequency mapping sonar system was responsible for a mass whale stranding in northwest Madagascar in 2008, finds a new report.

(06/27/2013) Australia is hoping to put a permanent end to Japan’s annual slaughter of hundreds of whales in the Southern Ocean, in a landmark legal challenge that begins this week. Australia, a vocal opponent of Japan’s annual “scientific” hunts in the Antarctic, says it is confident that the international court of justice (ICJ) in The Hague will outlaw the hunts at the end of a highly anticipated case that is due to start on Wednesday.

(02/27/2012) Scientists have captured what is believed to be the world’s first footage of the cryptic Shepherd’s beaked whale (Tasmacetus shepherdi), one of a number of beaked whale species about which scientists know almost nothing.