by Federica Di Leonardo on 2 December 2013 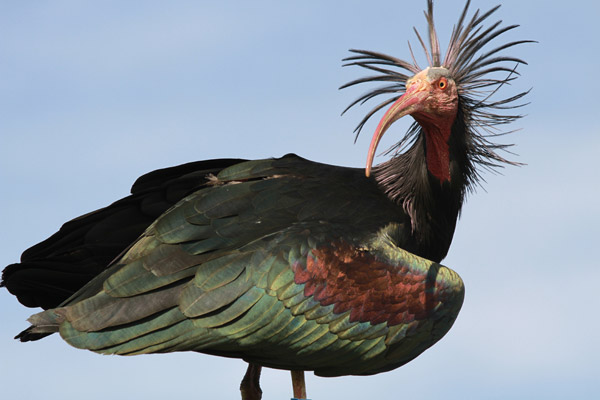 The northern bald ibis (Geronticus eremita), also called the hermit ibis or waldrapp, is a migratory bird. Once, the bald ibis lived in the Middle East, northern Africa and southern and central Europe, but due to hunting, loss of habitat and pesticide-use, the birds disappeared from most of these areas and is currently considered Critically Endangered. It became extinct in Europe 300 years ago; the bird is almost gone in Syria, with only a single individual recorded at the country’s lone breeding site in 2013; and the only stronghold left is a small population of around 500 birds in Morocco. But now, a team of scientists from Austria is working to reestablish a self-sustaining, migratory population of bald ibis in Europe.

In 2002 Johannes Fritz, who had been a doctoral student in biology at the Konrad Lorenz Research Station in Austria, came up with the idea of taking northern bald ibises from zoos and imprinting them, in effect becoming their foster parent to teach them a new migratory route to Italy. After more than ten years of research and feasibility planning, the Austrian Waldrappteam, together with partners from Germany and Italy (the Parco Natura Viva Garda Zoological Park) received funding from the European Union for a Life+ Project to be held from 2014 to 2019. The aim of the project is to create a European population of at least 120 ibises that migrate autonomously from Germany to Italy.

Experiments conducted in the 1990s demonstrated that ibises raised in the zoos retain their migration instincts, but have no sense of which direction to fly. Because of this, Johannes Fritz decided to teach the ibises to migrate via a road to a World Wildlife Fund (WWF) Oasis in the Tuscan town of Orbetello. 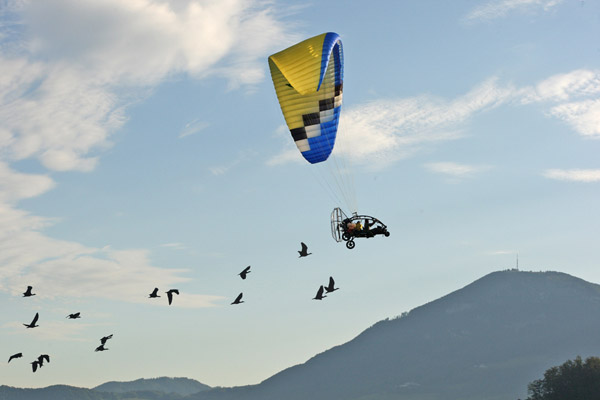 “The project started in 2002 and in 2003 the first migration led by humans failed. So the first group of northern bald ibises arrived in Tuscany in 2004,” Nicoletta Perco, head of the Italian side of the project, explained to mongabay.com. Since then a total of seven migrations led by humans have been undertaken.

WWF Oasis Laguna di Orbetello, in Southern Tuscany is a lagoon with a favorable microclimate during winter because it is in front of an offshore island. Since various bird species winter here, ornithologists advised the team to choose this area for the human-led ibis migration. Northern bald ibis breed colonially, lay two-to-three eggs per nest and feed on insects and small animals.

But teaching the ibises to migrate via the road was not a simple task. The birds had to learn to follow their foster parents on paraplanes, and the scientists had to learn how to make the flight as easy as possible for them.

During the initial years of the project, Fritz did not know where and when to stop for a rest. He often had to ask for permission from farmers and other landowners in order to camp at night on private land. Hot air currents made the flight faster and easier, and Fritz began to plan rests based on their locations.

In July 2011, an ibis called Goya came back to the migration start point at Burghausen, Germany for the first time. Goya was outfitted with a GPS tracker that showed that it took a shortcut during the return trip, making this the first time that this behavior was observed in migrating birds. In 2012 Goya bred, the first of the migrating European ibis population to do so. But that same year, Goya was killed by poachers in Italy, a fate shared by approximately half of all ibises that flew to Italy over ten years. Many of the ibises were killed in the Appenines, in Tuscany, or in the Po-Valley. 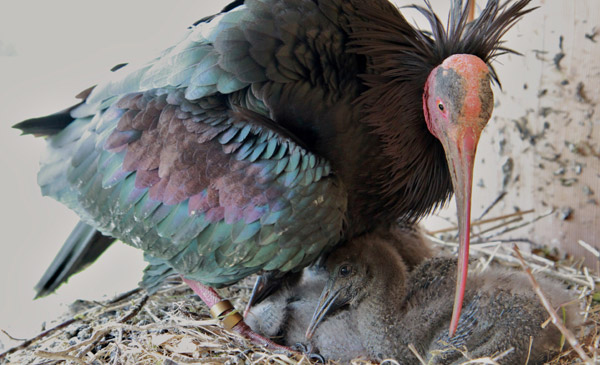 “Now, in 2013 we had a total of 18 migrants,” Johannes Fritz told mongabay.com. “Two of them are still on the way, the others are already in the wintering area. Till now, we had no losses in Italy due to illegal hunting during the autumn migration of 2013. That’s great, but it is mainly due to the fact that we make a quite intensive and invasive management, thanks to GPS trackers and members of the team following the birds during migrations.”

When the team—people and birds—has to stop for a rest, the conservationists inform the hunters, the police and the public. Following the birds so strictly is invasive management, but Fritz explained such management will be necessary for the next two or three years to build up a substantial number of migrating birds.

The birds that arrived in the wintering area were enclosed, until 2011, to avoid losses due to poaching during the hunting season in Italy.

“Since winter 2012 the birds started to fly freely also during winter time. This was possible thanks to the GPS trackers,” Perco says. “One or more persons are present at the Oasis during the whole period to follow intensively the birds and avoid accidents. In this way the natural and migratory behavior of the birds is promoted.”

The Life+ project funded by the EU to create a stable population of ibises includes a tracking component. Most of the birds will be equipped with GPS units, which can be located via a smartphone app. In addition, the project includes implementation of public awareness and hunting campaigns, in collaboration with major Italian hunting associations. 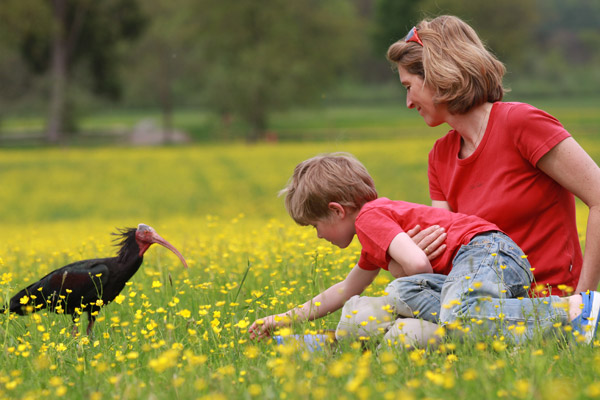 “Even though we could avoid losses due to illegal hunting in 2013—thanks to capture of the birds during their migration journey – poaching is still our major problem,” said Fritz. “Fortunately, the hunting associations are willing to support our project. In addition, we aim to go for a private lawsuit against an identified poacher, which shot two of our birds last autumn near Livorno.”

Through the Life+ project , a campaign for Italian hunters will be implemented, in collaboration with major Italian hunting associations.

The scientists will also conduct genetic analyses on the birds to monitor genetic variability, and perform six more human-led migrations with hand-raised juveniles obtained from sedentary free-flight colonies and zoos.

“I am more and more optimistic that at the end we will be able to establish a self-sustaining, migratory population of ibises in Europe,” said Fritz. “Hopefully with some added value, like a general reduction of illegal hunting on migrating birds in Italy.”

So, after 300 years, the northern bald ibis may soon fly free—and even secure—again in Europe. 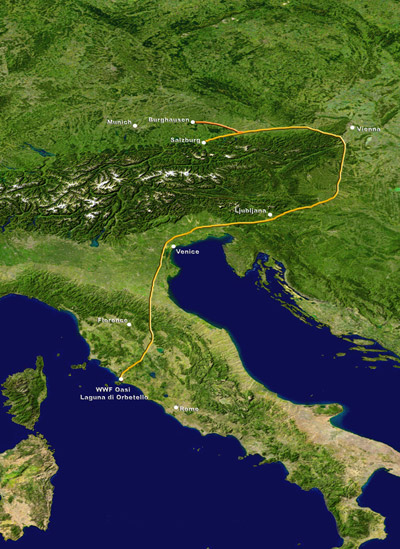 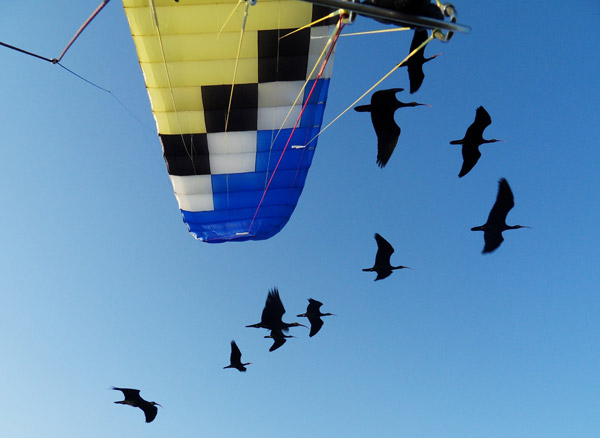 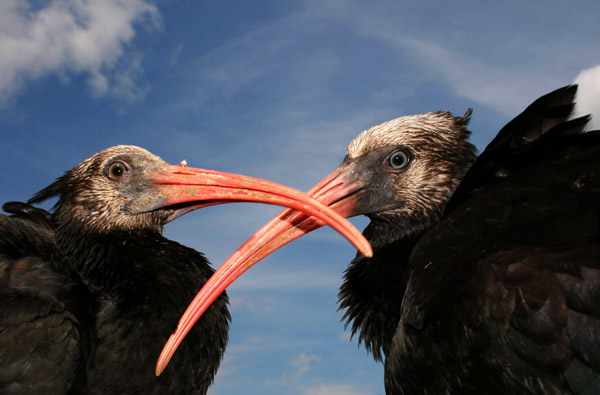 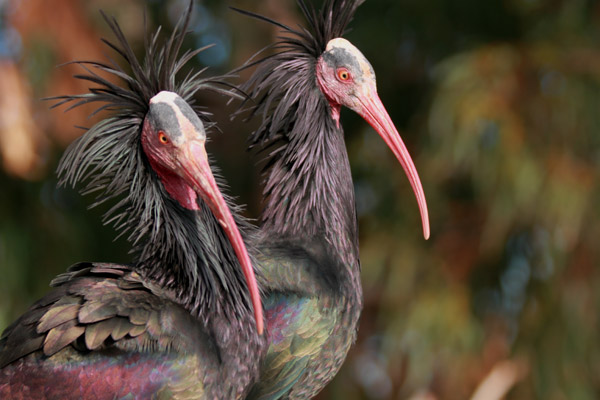 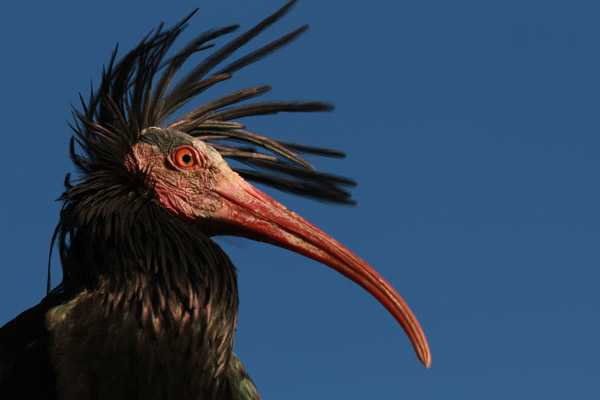 Portrait of a northern bald ibis. Photo by: Waldrappteam. 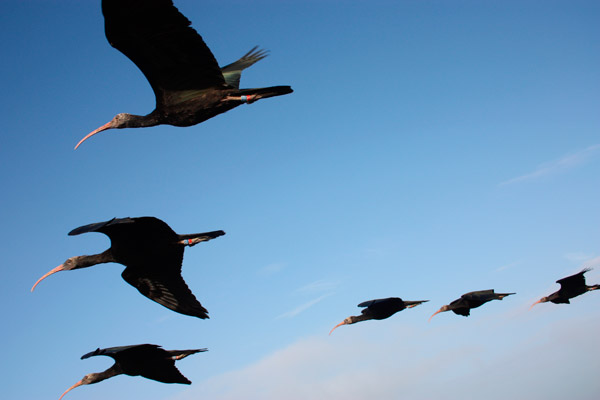 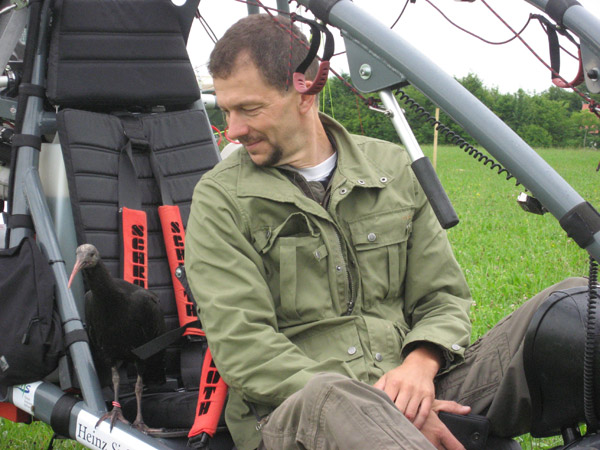 Johannes Fritz with a northern bald ibis. Photo by: Waldrappteam.