Efforts to map and analyze deforestation and forest degradation got a boost today when Stanford University announced a new online course that provides training on how to use advance forest monitoring software. The course, which is freely available via Stanford University Online Learning, could immediately increase the capacity of environmentalists, forest managers, and researchers to track changes in forest cover.

While CLASlite is already used by more than 180 organizations worldwide, making the training freely available online will help overcome a bottleneck that has slowed wider adoption, according to Carnegie Institution’s Department of Global Ecology, whose researchers developed the platform.

“The idea for the CLASlite Classroom emerged when demand for the software began to exceed the capacity for Carnegie’s scientists to host in-person training workshops,” said Carnegie in a statement. “They have trained hundreds of organizations throughout Latin America and elsewhere, but future training will be done via the World Wide Web.” 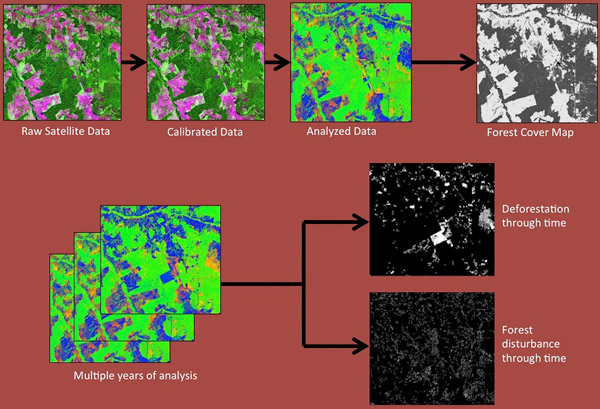 The training includes information on how to acquire data, prepare satellite imagery, and assess results, which can detect changes to forests in areas as small as 0.1 hectare (0.25 acre). It also provides case studies of CLASlite being used by officials and NGO’s to monitor forests. For example, the software has been used to detect illegal logging and gold mining in the Peruvian Amazon.

“CLASlite represents for our country an improvement in the capacity of over 400 professionals who were trained in the software between 2010 and 2013,” said Peruvian Minister of Environment Manuel Pulgar-Vidal. “With it, we are generating information about the state of the forest that supports the development of public policy for conservation and sustainable use of our Amazonia.”

Until now, CLASlite training efforts have been primarily concentrated in Latin America, but the new course offers the potential to democratize forest monitoring on a global-scale, taking what was once the domain of experts and putting the capability into the hands of many, according to Greg Asner, the researcher who pioneered the development of CLASlite and its predecessor CLAS.

“When I was in graduate school in the 90s, a single satellite image could cost more than $2,000 and only a few elite groups could afford the data,” Asner said. “Much has changed since then, but a means of empowering people to perform forest monitoring on their own is still missing. Launch of CLASlite Classroom aims to change that. My team and I believe in putting learning first so that forest monitoring will be undertaken with independence and transparency. Our forests depend on it because forest stewardship begins with personalized forest monitoring.”

“CLASlite will empower thousands of new forest guardians,” added Bruce Babbitt, former-Secretary of the Interior, in a statement. “A brilliant achievement.”

CLASlite Classroom comes as interest in forest monitoring is surging. Last month, Google announced the first iteration of a global forest map developed by scientists from a range of institutions. Meanwhile Global Forest Watch, a near real-time deforestation detection system put together by the World Resources Institute, is expected to launch next year. Terra-i — a collaborative project between Colombia’s International Center for Tropical Agriculture (CIAT), the Nature Conservancy (TNC), the School of Business and Engineering (HEIG-VD) in Switzerland, and King’s College London — has a similar alert system already in place for Latin America.