A breeding population of a critically endangered harlequin toad thought to be extinct in Costa Rica has been discovered in a tract of highland forest in the Central American country, reports a paper published in Amphibia-Reptilia.

Atelopus varius, an orange-and-black harlequin toad, was once relatively common from central Costa Rica to western Panama. But beginning in the 1980’s the species experienced a rapid population collapse across most of its range likely due to the spread of the deadly chytrid fungus that has been wiping out amphibian populations around the globe.

“In less than 20 years, known populations in Costa Rica declined from 100 to one,” notes the paper. By 1996, the species was considered extinct in the country.

But in 2004 there was a brief moment of hope when a population was discovered near Quepos, in southwestern Costa Rica. Subsequent surveys however failed to turn up any frogs.

Sustained good news for the frog finally came when researchers stumbled upon a significant population on a private reserve within La Amistad Biosphere Reserve, near the Panamanian border. The new paper describes the population, which numbers over 200 individuals, and documents breeding behavior. 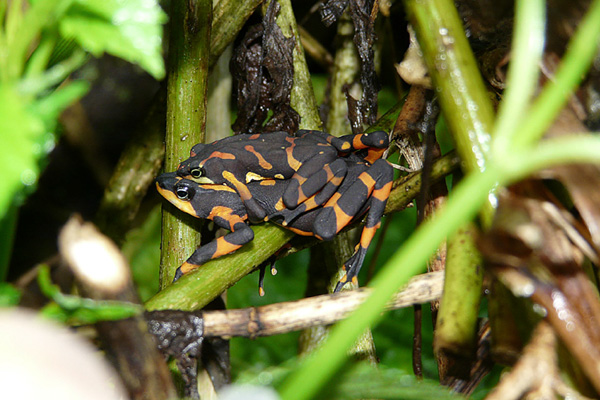 An amplexus of Atelopus varius from the recent discovered population in the Talamanca mountains of Costa Rica. Atelopus varius is not the only harlequin toad that has been affected by chytridiomycosis: the entire Atelopus genus has been especially hard hit — more than three-quarters of known species are classified as Critically Endangered on the IUCN Red List. Photo courtesy of González-Maya et al 2013.

The authors, led by José F. González-Maya of the Sierra to Sea Institute & ProCAT International in Costa Rica and the Universidad Nacional Autónoma de México (UNAM), say the find offers hope for other thought-to-be-extinct species in Costa Rica.

“Our findings fit into the emerging theory that
species which have been presumed extinct are
beginning to be re-discovered in Costa Rica and
elsewhere. After severe declines, often to where
zero individuals are detected in the wild, several
frog species have been re-discovered in areas of
Costa Rica with previous records of chytrid, as
well as in areas not sampled previously,” write the authors.

“These findings follow a pattern
similar to our finding in that species considered
extinct or near-extinct, with recorded massive
declines due to chytrid have been rediscovered
at previously known locations. Recent
analyses suggest that certain areas of Costa Rica
have high probabilities of re-discovering populations,
and most have not been sampled since
2000.”

Atelopus varius may therefore be just one of many “Lazarus species” whose epitaphs were written a bit too soon.