In 2011, the top 11 richest carbon emitters spent an estimated $74 billion on fossil fuel subsidies, or seven times the amount spent on fast-track climate financing to developing nations, according to a recent report by the Overseas Development Institute. Worldwide, nations spent over half a trillion dollars on fossil fuel subsidies in 2011 according to the International Energy Agency (IEA).

“The status quo encourages energy companies to continue burning high-carbon fossil fuels and offers no incentive to change,” said the report’s author Shelagh Whitley. “We’re throwing money at policies that are only going to make the problem worse in the long run by locking us into dangerous climate change.”

In 2009 at the Climate Summit in Copenhagen, governments around the world committed to keep global temperatures from rising 2 degrees Celsius above pre-industrial averages. However, four years later—with governments having made little progress to date towards that goal—fossil fuel subsidies remain one of the major stumbling blocks.

Fossil fuel subsidies take a variety of forms: in 2011 alone, the U.S. spent $1 billion on fuel tax exemption for farmers and another $1 billion on the strategic petroleum reserve; Germany gave $2.5 billion financial assistance to its coal industry; while the UK spent $447 million in tax concessions to the oil and gas industries. The wealthy nations that spent the most subsidizing fossil fuels included Russia, the U.S., Australia, Germany and the U.K.

While the EU has been lauded for putting a price on carbon, the price has been allowed to drop so low (less than $7 tonne) that fossil fuel subsidies on the continent may actually negate any benefit entirely, according to the report. 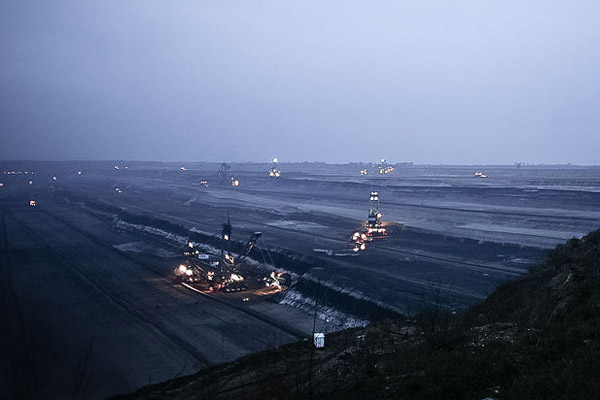 Vehicles work at night in the Tagebau Garzweiler coal surface mine in Germany. Photo by: CherryX/Creative Commons 3.0.

Such subsidies worldwide have actually put renewable energy on an unequal footing with fossil fuels, even as many governments pay lip service to the need to transition from fossil fuels to renewables.

“Coal, the most carbon-intensive fuel of all, is taxed less than any other source of energy and is, in some countries, actively subsidized,” says the report.

“It has been hard to reach an agreement because subsidies touch directly on issues of government sovereignty, trade competition and poverty alleviation,” reads the report, adding that lack of data “across countries inhibits even the very first proposed step of subsidy phase-out: the analysis of the costs and distortions that subsidies impose on the economy.”

Governments have long argued that energy subsidies—including the bulk of those which are aimed at fossil fuels—are meant to keep costs down for consumers and especially help the poor. The debate over poverty and fossil fuel subsidies is especially important in developing countries. However, research shows that little of the subsidies actually assist the poorest. According to the International Monetary Foundation (IMF) only 7 percent of subsidies in the world’s developing countries actually goes to the bottom 20 percent in income.

(10/17/2013) Outdoor air pollution has been officially classified as carcinogenic by the cancer arm of the World Health Organization. The International Agency for Research on Cancer (IARC) said air pollution from traffic and industrial fumes was a definite cause of lung cancer and also linked to bladder cancer. The strong verdict from IARC, a cautious body that pronounces only when the evidence is strong, will put pressure on governments to take action.