The plan from Ecuador’s government was simple: Pay us and we won’t destroy the planet’s most extraordinary ecosystem. Dubbed the Yasuní-ITT initiative, the plan called upon developed nations to pay for protecting Ecuador’s Yasuní National Park from oil companies.

Now, a recent study claims the plan was fraught with flaws as basic as drawing lines on a map.

Yasuní National Park is a remarkable biodiversity hotspot. A typical hectare of land hosts more species of trees, insects, and amphibians than are known in the U.S. and Canada combined. The 9,800 sq km bioreserve also shelters the country’s last indigenous groups living in voluntary isolation, the Tagaeri and the Taromenane.

However, the park sits atop a massive trove of petroleum. Three prospective fields—designated Ishpingo–Tambococha–Tiputini (ITT)—harbor up to 850 million barrels worth an estimated $7 billion.

Since the early 1990s, Ecuador has permitted oil drilling in the national bioreserve. Despite a history of oil spills and violence against indigenous communities, including rape, these operations crept toward the ITT.

Schemes to drill in the ITT, however, were indefinitely suspended in 2007 by the Yasuní-ITT initiative. This government established a “Zona Intangible”: a sector of the bioreserve forever safeguarded from the oil industry. Ultimately, the country only attracted $16 million in donations over 6 years, leading President Rafael Correa to scrap the program in August. 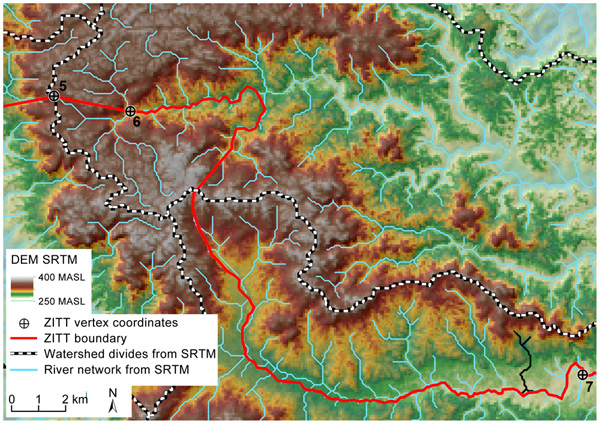 A Digital Elevation Model of a portion of the zona intangible boundaries reveals a section that jumps from one watershed to the next (between points 6 and 7). Study authors identified this flaw as “geographical nonsense.”

A recent study, published June 19 in PLOS One, argues the government-issued maps for this zone were laced with inaccuracies that did not match the 2007 presidential decree.

“The Yasuní-ITT initiative has been a revolutionary plan on paper (and in the media), but a complete failure in the field,” said study co-author Eugenio Pappalardo of GeoYasuní, a center of environmental scientists based at the University of Padova, Italy, in an email interview with mongabay.com.

Researchers uncovered glaring errors by comparing the state’s official cartography with digital elevation models, Landsat imagery, and in-person surveys. One example involved the northern border, described as running along the Rio Dicaro. Rather than following the river’s main basin, the boundary veered over a tributary and jumped to a southerly river, the Rio Nashiño.

This discrepancy shrank the intangible zone—and also permitted an oil field established before the decree to escape inclusion within the boundaries of the proposed protected area.

Regardless, this field was still operating within the zone’s 10 km buffer region, raising questions over who was enforcing the decree when it was active. 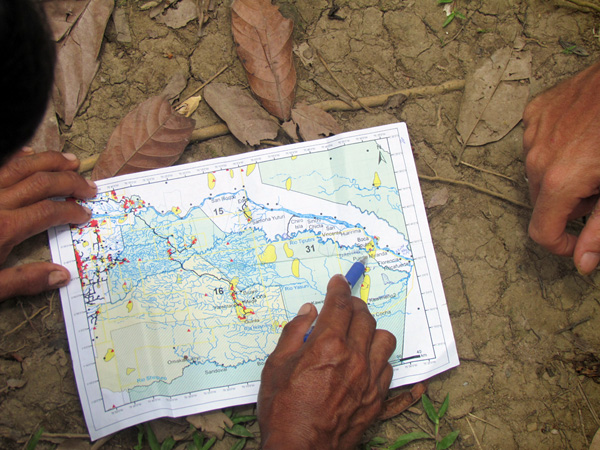 De Marchi recommended more educational training for oil industry employees on the customs of indigenous peoples living in the Yasuní. The Tagaeri and Taromenane are known for violently defending their territory from intruders, he notes. In March, two members of a related indigenous group were speared to death—the latter notably occurring outside of the zona intangible.

Other experts echoed the importance of rational borders for the Tagaeri and Taromenane.

“Losing the traditional routes that support their nomadic patterns may force sedentarization or cut them off from natural resources, such as medicinal plants or food ,” Luisa Maffi, co-founder and director of Terralingua, an international NGO focused on maintaining biocultural diversity, told mongabay.com.

Matt Finer, an ecologist with Save America’s Forests, told mongabay.com via email that “the hope was the zone would represent a first step, and future efforts would expand the limits to better fit the actual geographic boundaries of their territory based on anthropological research. Unfortunately, this has not yet happened.”

An “ecological trail” built by Petroamazonas in Block 31 within the ITT area. Photo © Ivan Kashinsky.

is a graduate student in the Science Communication Program at the University of California, Santa Cruz. Akpan’s writing has appeared in Scientific American, Nature, Science, and The Scientist Magazine.